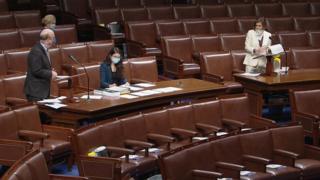 The US House of Representatives has passed a new Covid-19 relief package totalling $484bn (£391bn), the fourth aid bill to clear Congress in response to the pandemic.

President Donald Trump has already said he will enact the bill, which passed the Senate unanimously on Tuesday.

Lawmakers have given $310bn in new funds to the Paycheck Protection Program, which offers loans to small businesses so they can keep employees on the payroll.

The $349bn allocated to the programme last month ran out last week, leaving millions of business owners questioning how they could keep operating.

Democrats also said funds should be allocated for hospitals and testing.

Hospitals will now receive $75bn, and $25bn will go towards expanding Covid-19 testing – which experts have emphasised is a key step to re-opening the economy.

Today’s vote took place with new social distancing measures – lawmakers waited in their offices for the vote, came to the floor in small groups and the chamber was cleaned between group votes.

Ohio Republican Jim Jordan angered some Democrats for appearing on the House floor – and reportedly coughing – without a face covering.