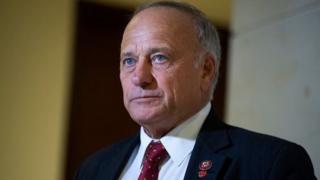 Controversial US Congressman Steve King, who has been criticised for a string of remarks on race and immigration, lost his bid to secure a 10th term in office on Tuesday.

The Republican has held his Iowa seat since 2002, but was beaten to the party’s nomination in a primary vote by state senator Randy Feenstra.

It comes amid mass protests in the US against racism and police brutality.

They follow the death in police custody of unarmed black man George Floyd.

Last year Mr King was stripped of his House committee seats after questioning why terms like “white supremacy” were offensive.

The following month, when defending a ban on abortion, he suggested much of the human race might not exist without rape or incest, prompting renewed calls for him to resign.

“Wilders understands that culture and demographics are our destiny,” Mr King wrote on Twitter. “We can’t restore our civilisation with somebody else’s babies.”

He later defended his comments, telling broadcaster CNN that he “meant exactly what he said”.

The former lawmaker has also previously tweeted his support for a Toronto mayoral candidate with Neo-Nazi ties, and claimed in 2017 that diversity was not America’s strength.

Despite multiple controversies, until now he has continued to hold Iowa’s fourth congressional district.

He narrowly reclaimed his seat in 2018, with just three percentage points separating him from his Democratic challenger.

Congratulations to Randy Feenstra on your big win in the Iowa Republican Primary. You will be a great Congressman!

In a video, Mr Feenstra thanked his supporters for “placing their trust” in him.

“I’ve said from day one that Iowans deserve a proven, effective conservative leader that will deliver results,” he added.

Mr King posted a video of his own, saying his ousting was part of “an effort to push out the strongest voice for full spectrum constitutional Christian conservatism” from Congress.

“There’s some powerful elements in the swamp that [Mr Feenstra’s] going to have an awfully hard time pushing back against,” he said.

A result to please all parties

Steve King’s defeat is one of those rare electoral events that will be welcomed across much of the US political spectrum.

It will be celebrated by Democrats, who will view it as an indication that Iowa voters have soured on the congressman’s divisive rhetoric, support for white nationalist viewpoints, and vehement anti-immigration views. Mr King’s outspoken advocacy for a Mexican border wall predated Donald Trump’s political rise, and they hope it could be a harbinger of his November defeat as well.

Many Republicans will be relieved that an embarrassing congressional back-bencher in a safe seat will be replaced by someone who will be a reliably conservative vote without Mr King’s political baggage.

In recent years, Mr King’s continued success was seen as a sign that his brand of unapologetic ethno-nationalism had a foothold in the US. As a member of Congress, his associations with foreign politicians with similar viewpoints – such as Faith Goldy in Canada and Heinz-Christian Strache of the Austrian Freedom Party – gave them greater political standing in their home countries.

With Mr King on his way out, that official imprimatur is gone, even if the sentiments he gave voice to still remain.