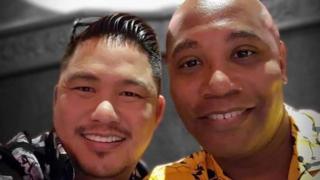 People living thousands of miles apart with nothing in common are today united in their struggle against coronavirus.

More than three million people around the world have tested positive for the virus since it first emerged in China late last year. Close to 230,000 have died.

There are only a handful of countries that haven’t been touched by the pandemic.

On Thursday, we told you about the lives of seven people in the UK who died on 12 April, the day the country officially surpassed 10,000 hospital deaths.

These are the stories of four other deaths on three continents that also happened that day.

Maria Pollidori was admitted to hospital in central Italy in late February for a stomach cancer operation. Everything seemed to have gone smoothly, and her family looked forward to her return.

But on 9 April they received a call from the hospital saying the 84 year old had tested positive for coronavirus.

Italy is at the epicentre of the global pandemic, recording more coronavirus-related deaths than any other country in the world. The central region of Marche, where Maria and her family live, has recorded thousands of cases.

But Maria’s family had no idea that she had been showing any symptoms.

Three days after they received the call from the hospital, she passed away.

Her son Pierluigi said the hardest thing was not being able to be close to her “at the time she needed us most”.

Maria’s death was not only felt by her family. As a nurse and midwife of 25 years she was well known in and around the small seaside town of Porto Potenza.

But because of the pandemic, no-one was able to pay their respects to her at a funeral.

It is a story that echoes throughout the country.

Thousands of miles away in the US state of Texas, Phillip Tsai-Brooks and his husband Anthony were both in hospital with Covid-19 on 12 April.

It was love at first sight when the pair were introduced through mutual friends.

They married in 2014 on a cruise ship in San Francisco Bay, and brought Phillip’s widowed mother on their honeymoon to Puerto Rico – as they often did on their much-loved international travels.

In a statement to the BBC, Phillip’s brothers said Phillip and Anthony were able to break barriers, and were accepted as a couple in the city of San Antonio, where they were known for the joy they brought to people’s lives.

Phillip, one of five brothers, had always dreamed of being a hair stylist and one day opening his own salon. His ambitions were realised when he opened the Extreme Opulence Hair Studio. More recently, he had been teaching others in the profession.

Only child Anthony, known as Tony, spent several years in the US Air Force before working for his local council, helping with budget planning for the city of Live Oak.

A colleague said he was “smarter about city budgets than most people”, and described him as “one of the nicest guys you’ll ever meet”.

The charismatic military veteran would regularly bring sweets into work for the local mayor, dropping them in a jar on her desk, he said.

Relatives and friends of the men described them as the perfect couple. They dreamed of one day adopting their own children.

But their lives and dreams were tragically interrupted by the outbreak of coronavirus.

In a Facebook post in late March, 42-year-old Phillip said he was feeling unwell and had been told to quarantine as a precaution.

Six days later, he said he was in hospital with confirmed coronavirus.

“Be here for a couple of days… then quarantine,” he wrote.

Anthony, 52, was taken to a different hospital, suffering similar symptoms.

In what Phillip’s brothers described as the final chapter of their love story, Tony was moved from another healthcare system into the same hospital as Phillip. As their conditions deteriorated, they lay in rooms next to each other.

Phillip passed away on 12 April after suffering a heart attack as a complication of Covid-19. Just two days later, Anthony died.

“Such a tragic loss but their love will last forever,” Phillip’s brothers said.

Elsewhere in North America, Victor Batista Falla had recently returned to Cuba, the country of his birth, for the first time in 60 years.

The 87 year old was born into one of the wealthiest families in the country, with his father’s side founding a bank and his mother descending from rich sugar planters.

He fled the country in 1960, after Fidel Castro and his revolutionary forces ousted President Fulgencio Batista.

Victor then became a prominent figure of Cuban exile literature, founding the journals Exilio and Escandalar in New York.

After moving to Madrid, he opened the publishing house Colibrí, through which he published numerous essays about Cuba.

France-based Cuban writer William Navarette met Victor in the Spanish capital in 1996 at a cafe popular with Cuban exiles. After their first meeting, the pair saw each other whenever William was in Madrid.

William described Victor as a man who hated confrontation and gossip, and who was protective of his privacy.

“He was a bon vivant, but very measured,” William said of his friend.

“He never ostentatiously displayed relationships and never boasted about the things he did.”

Victor’s high-profile relationships extended far beyond Cuba. He was the uncle of the Grand Duchess of Luxembourg and a statement from the duke and duchess said his death was a “great loss” for the family.

William said Victor never spoke of his connection to the royals and did not like to talk about his family’s vast wealth.

After 60 years away from the country, Victor quietly returned to Cuba in February. It’s not clear what led him to return.

William did not know anything of the trip until he read a newspaper article telling him that his friend had died there of Covid-19.

In the early hours of 3 December, 1984, a valve broke in a storage tank inside a chemical factory in the central Indian city of Bhopal.

Soon after, a deadly cloud of gas escaped from the factory into the surrounding neighbourhoods. It became one of the deadliest industrial disasters in modern history. Thousands of people died, and tens of thousands more needed treatment.

Among them was Imran Khan, who was just a young boy when the disaster happened. Two years ago, he developed mouth cancer, believed to be a result of the leak, and had to give up work.

After surviving his initial cancer, it returned again, and he was forced to undergo more chemotherapy.

His condition deteriorated in recent weeks and he died on 12 April. Later tests confirmed that he had contracted coronavirus.

A group representing survivors of the gas tragedy have accused the local government of turning their backs on people like Imran.

They say five gas leak survivors died of coronavirus within days of each other.

A hospital set up for gas victims was converted into a facility for coronavirus patients. The Bhopal Group for Information and Action says gas victims were then ignored, despite being particularly vulnerable to the virus because of their health conditions.

Imran’s older brother Rashid Khan is now looking after his wife and son.

“The wellbeing of his entire family is on my shoulders,” he told BBC Hindi.