Snowfall and skiing are affecting how Europe is dealing with the coronavirus in the run up to Christmas.

England has recently gone from a full national lockdown into a tiered system, while Wales has banned serving alcohol at hospitality venues, Scotland is also in a tiered system and Northern Ireland is looking to come out of a full lockdown.

Below, Sky News rounds up all the major developments from the continent recently.

Testing has been suspended in parts of the Austrian Alps after massive amounts of snow fell in the region.

Some areas saw as much as 70cm of snow on Friday night, with another metre or so expected to fall on Sunday, and avalanche warnings have been put in place.

Voluntary mass testing started in Austria on Friday, and 300,000 out of nine million have been checked for COVID-19.

The country came out of lockdown measures on Sunday, although the hospitality sector will remain shuttered until the new year.

Skiing will be allowed from Christmas Eve however. 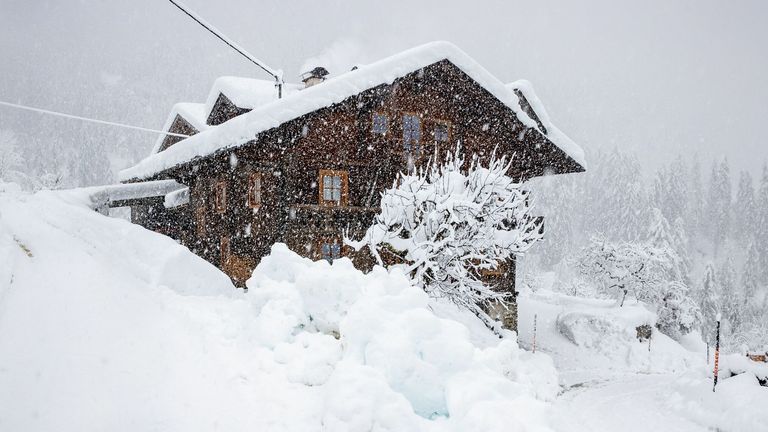 Switzerland, like Austria, has seen a lot of snow in the past few days.

But the alpine nation has opened its ski slopes for those looking to take to the piste – as long as masks are worn and other safety conditions are met by the resorts.

This is causing tensions with neighbouring countries, like France, who have said they will enforce border checks to stop their own citizens going into Switzerland for skiing.

However, the “apres-ski” bars have been shut amid the pandemic, with the close-quarters of the post-slope drinking dens thought to have been a mixing pot for the virus at the start of the year. 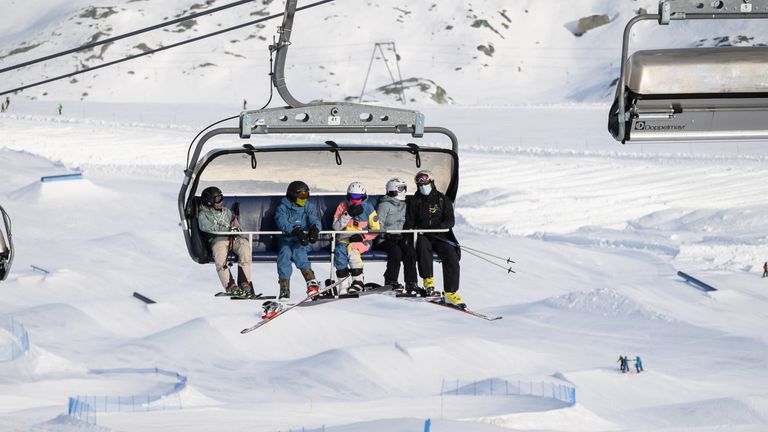 One of the worst hit parts of Europe, Italy still has strict restrictions in place.

With more than 1.7 million cases confirmed since the start of the pandemic, it was when harrowing news of the virus’s effect started to emerge in the north of Italy that the coronavirus truly surfaced as a worldwide pandemic.

Now, travel between different regions in the country will be banned for the Christmas period.

A curfew will be in place, and the ski slopes in the country will be off limits until at least the new year.

Following the second spike in cases, Italy started to operate a tiered lockdown system ranging from red, the most severe, through orange to yellow, the least strict.

Germany is being hit hard by the second wave of the virus.

It recorded 6,211 deaths with COVID-19 in November – roughly a third of the 18,839 total fatalities across the entire pandemic.

As such, Chancellor Angela Merkel announced in the past week that restrictions will be extended until 10 January, having previously been slated to end on 20 December.

A brief respite in the rules will take place from 23 December to 1 January, allowing 10 people – not counting children – to meet up.

Skiing resorts have been closed in Germany too. 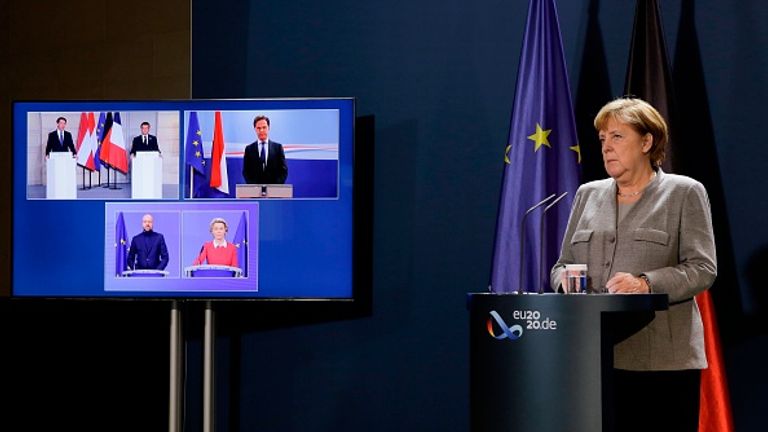 Sweden, which was notable for not going into strict lockdown at the start of the year, has introduced restrictions as it deals with a second spike in infections.

The number of people allowed to gather was cut from 50 to eight during November.

And children aged 16 and over will learn remotely instead of in classrooms starting on Monday and ending on 6 January.

But as recently as 3 November, the Swedish Health Agency has declined to advise the wearing of masks. 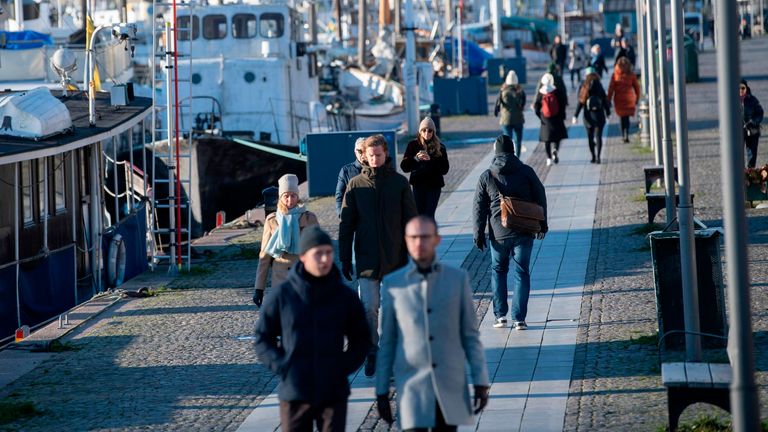 France went into its second lockdown just days before the UK did.

President Emmanuel Macron has said that in order for him to lift the measures on 15 December, the number of daily new infections must drop to 5,000 – it currently sits at 12,923 as of Saturday.

France has shut its ski slopes, and is enforcing random border checks to try and stop people crossing the border into Switzerland where the resorts are open. 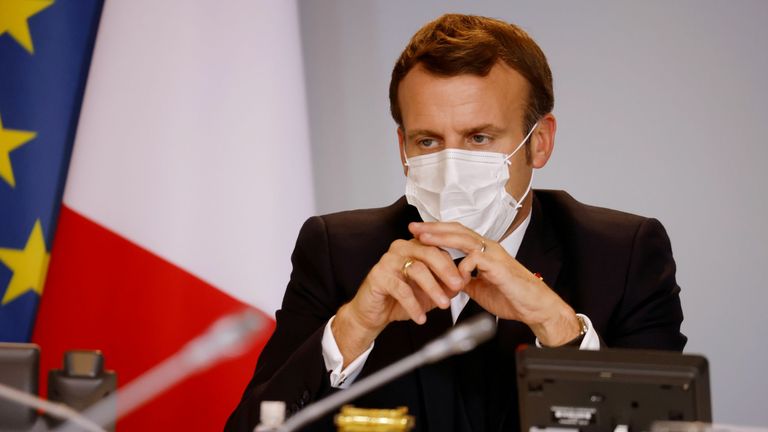 Due to the regional way in which Spain is governed, there has been more variety in how the country responded to the pandemic.

National guidelines were issued but the various regions could work within these.

Recently the region of Catalonia – in the north-east of the country – announced it would not relax the restrictions in the area on Monday.

The administration in the region put off the re-opening by a week, forcing ski resorts to also put back their reopening dates.

Figures were on a downward trend until the hospitality sector reopened on 23 November, according to Catalan health secretary Josep Argimon. 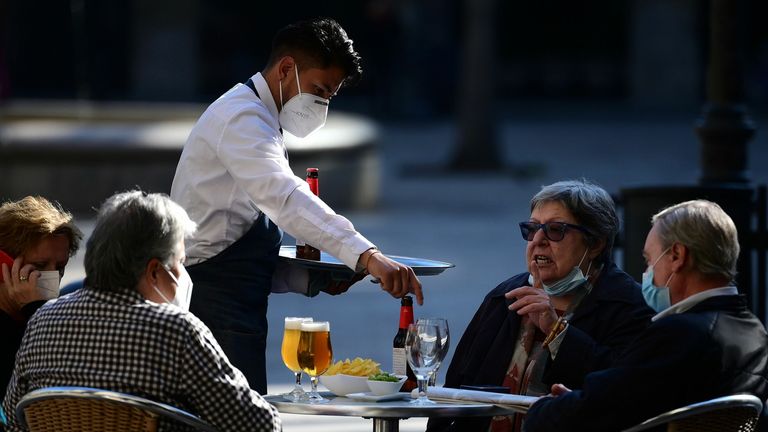 Elsewhere, Belgium – where the Pfizer/BioNTech vaccine is being produced – has managed to turn its situation around after suffering a significant second wave.

The Netherlands recently made mask-wearing mandatory indoors, as it struggles to push daily infection rates below 5,000.

The Republic of Ireland, which was early into a second lockdown, came out earlier than most as well.

Travel between counties will be permitted from 18 December.