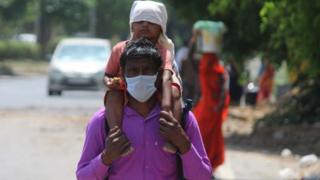 A lockdown to curb the spread of coronavirus has seen 122 million Indians lose their jobs in April alone, new data from a private research agency has shown.

India’s unemployment rate is now at a record high of 27.1%, according to the Centre for Monitoring the Indian Economy (CMIE).

The new data shows India’s unemployment figures are four times that of the US.

The country has been in lockdown since 25 March to curb Covid-19 infections, causing mass layoffs and heavy job losses.

Unemployment hit 23.5% in April, a sharp spike from 8.7% in March. This is attributed to the lockdown, which brought most economic activity – except essential services such as hospitals, pharmacies and food supplies – to a standstill.

Scenes of desperate migrant workers, particularly daily-wage earners, fleeing cities on foot to return to their villages, filled TV screens and newspapers for most of April. Their informal jobs, which employ 90% of the population, were the first to be hit as construction stopped, and cities suspended public transport.

But protracted curfews and the continued closure of businesses – and the uncertainty of when the lockdown will end – hasn’t spared formal, permanent jobs either.

A closer look at CMIE’s data shows the devastating effect the lockdown has had on India’s organised economy.

Of the 122 million who have lost their jobs, 91.3 millions were small traders and labourers. But a fairly significant number of salaried workers – 17.8 million – and self-employed people – 18.2 million – have also lost work.

Agriculture, which remains the mainstay of the Indian economy, has bucked the trend, adding workers in both March and April. This isn’t unusual as many daily-wage earners return to farming in times of crisis, according to CMIE.

But experts warn that the economic cost of the lockdown is only starting to get higher.

“It is imperative that India weighs the economic cost of the lockdown on its people,” Mahesh Vyas, CEO of CMIE told the BBC.

The government has begun to ease restrictions in some zones or areas which have reported a lower number of infections, while strict curfews are still in place in districts that have seen a higher number of Covid-19 positive cases.

The lockdown is slated to end on 17 May but some states have extended it further, with no clear indication as to when the country as a whole might emerge from the lockdown.

Experts are also worried because India had entered the lockdown with already high unemployment levels. At 8.7%, the rate was already at a 43-month high, up from just 3.4% in July 2017, according to CMIE.