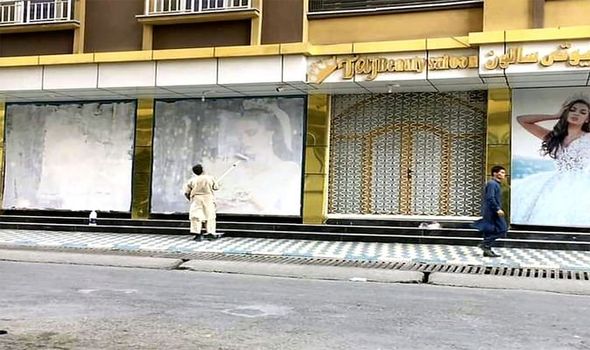 During that time women were not allowed to work, girls were banned from school.Those teachers and pupils who secretly attended classes “underground” risked execution if caught.

Females were forced to wear the burqa – covering the whole body – at all times in public and could only leave home if accompanied by a male relative.

The regime allowed and often encouraged marriage for girls under the age of 16.

Amnesty International reported that 80 per cent of marriages there were forced. And females faced public flogging and execution for violations of Sharia law.

In 2012, as a 15-year-old activist, she became a symbol of courage against extremist ideology after being shot on a school bus by the Taliban in Pakistan’s notorious Swat Valley.

Hit in the head, she miraculously survived and was flown to England for medical treatment. She has not stopped campaigning for all females to receive an education.

In a tweet to almost two million followers, she said: “We watch in complete shock as Taliban takes control of Afghanistan.

“I am deeply worried about women, minorities and human rights advocates.

“Global, regional and local powers must call for an immediate ceasefire, provide urgent humanitarian aid and protect refugees and civilians.”

The Islamist militants now claim to have softened their stance, saying they will write laws to ensure women will be able to participate in public life once they take back control.

But few trust the hardliners and many believe they could face reprisals for having dared to challenge the male hierarchy.

In recent days, thousands of women have fled Afghanistan, but many more of the 18 million females in the country are faced with waiting in their homes for the seemingly inevitable transfer of power.

Yesterday, Fawzia Koofi, who was a member of the Afghan delegation negotiating peace with the Taliban before the US military’s recent withdrawal, said women in her country felt “betrayed”. “Women in Afghanistan are the most at danger or most at-risk population of the country,” she said.

The future for women in Afghanistan appears “dark”, she added.

Already, women in areas that have fallen under Taliban control are said to be “like prisoners in their homes”.

Many had returned to the country in recent years at a time when the future seemed brighter and full of hope.

A growing number are financially independent and some even divorced from husbands.

These women feel they may be specifically targeted under a Taliban regime.

As the militants closed in on Kabul, women in the city were said to be preparing for what lies ahead. As fear has grown in the capital, so have sales of burqas, with prices rising tenfold.

Reports coming from some pro- vincial towns seized by insurgents in the last fortnight have done little to ease concerns.

In the southern city of Kandahar troops entered one bank and ordered nine women working there to leave. The gunmen escorted them to their homes and told them not to return to their jobs.

Instead, they explained, male relatives could take their place.

“It’s really strange to not be allowed to go to work, but now this is what it is,” said Noor Khatera, a 43-year-old who worked in the accounts department.

When Herat fell under Taliban control the females who made up 60 percent of students at the city’s university were told to go home.

Women working in offices were also turned away.

The evidence seems horribly clear – the rights won by Afghan women over the 20 years since the hardline Islamist militants were toppled will soon be lost.

Why did our brave young sons die if it was all for nothing?

Lesley’s son Lance Corporal Jake Alderton was serving with the 36 Engineer Regiment when he was killed in Sangin, Helmand Province, on November 9, 2007.

The vehicle the soldier from Bexley, south-east London, was in dropped off a bridge in a nighttime operation and he died of asphyxiation and drowning.

Lesley said: “My son died because he was sent to war with inadequate equipment.That was even the verdict of the coroner at his inquest. The troops’ night vision goggles were not up to the job, which effectively meant the driver had to drive blind.

“My family was destroyed. My 40-year marriage collapsed, my eldest son and I had mental breakdowns. I can never be the same mum again.The grief destroys you like a slow suicide.

“Some days I can barely hold myself up and I suffer terrible flashbacks and visions of my son’s dying moments. It’s left me with PTSD and panic and anxiety disorders.

“My son suffocated to death, and I feel I am slowly being suffocated by grief too. All the bereaved mums try to help each other – we understand each other without having to speak our grief out loud.

“As for the MoD, they simply close ranks and keep the truth from you. But we are not stupid and while we may have been naïve in the beginning, we have had a long time to reflect on their failings.The truth will come out in the end.”

Helen’s son Michael Pritchard was 22 when he was killed in Sangin, Helmand, on December 20, 2009.

The soldier from Eastbourne, East Sussex, was serving with the 4th Regiment, Royal Military Police when he was shot dead in a so-called “friendly fire” incident.

Helen said: “My life is one big mix of profound anger and sorrow made worst because the MoD lied to my face.

“I knew he had been killed in a ‘blue on blue’ but they wouldn’t tell me the truth.

“I found out by accident five months later from an Army padre that Michael had been mistaken for an insurgent and shot dead by a British sniper.

“To this day I don’t believe a single word about how my son died.

“It’s almost beyond words to convey the deepest pain within me. It’s a living torture.”

Carol’s son Sgt Simon Valentine was 29 years old when he was killed on August 15, 2009, trying to clear landmines on foot patrol near Sangin, Helmand Province.

The experienced soldier from Bedworth, Warks, had survived Kosovo, Northern Ireland and Iraq. He served with the Royal Regiment of Fusiliers and was a born leader, loved by his troop.

Carol said: “My life changed forever the day my son was killed. The grief eats you up daily and consumes you.

“I rarely sleep now, worrying if anything bad is going to happen to my other children and grandchildren. I was once a happy-go-lucky person, but that woman is long gone.

“For a long time after, I was told that my son died instantly from his injuries, but it was a lie.

“At Simon’s inquest I learnt that he was still alive and choking to death from the dust. I have had night terrors ever since, knowing I couldn’t help him or bring him comfort.

“On his last trip home, Simon told me that Afghanistan was the biggest hell hole on Earth.

“He said it was clear it was all about control of the oil and drugs out there. He died for nothing, and it destroyed my life.”

Caroline’s son Sergeant Gareth Thursby, of Skipton, North Yorks, was shot dead by an Afghan policeman at a checkpoint in Helmand Province.

He was serving with the 3rd Batallion The Yorkshire Regiment when he was attacked on September 15, 2012.

Caroline said: “Our sons were sent to war on a bed of lies and 20 years on we are back to square one with the Taliban in control.

“It breaks me apart and enrages me that our soldiers’ lives were treated so flippantly. I will never recover from losing Gareth.

“The bereaved mums are now all part of a club none of us want membership to but at least we have each other.

“On the days I can’t hold it together, they pick me up and I do the same for them.There are no words needed between us.We all share the same pain.”

Hazel’s son Private Richard Hunt of the RoyalWelsh regiment was 21 when he was wounded in an explosion while on a vehicle patrol of Musa Qaleh in Helmand Province.

The soldier, from Abergavenny, Wales, died of his injuries on August 15, 2009.

Hazel said: “The families left behind from this dreadful war are stuck in a life sentence of grief.

“If it had achieved something, such as women’s rights, children’s education, or health care, then we could at least say our boys didn’t die in vain. But sadly, their sacrifices have been for nothing.”

Caroline’s son Trooper James Munday was 21 and serving with the Household Cavalry Regiment when he was killed in an explosion while driving in Helmand Province on October 15, 2008.

Caroline, whose son was from Coleshill, Warks, said: “I’ve never been able to grieve my son properly. I have dreams of when he is a baby. I’m trying to hold him to me, but he keeps slipping out of my arms, drifting away from me.

“I live in dread that something terrible will happen to my surviving children and grandchildren but the rest of the time it’s like I’m living in some alien bubble.”

‘I am deeply worried about women, minorities and human rights advocates’