The area’s culture revolves around a good pastry and coffee from the diverse selection of bakeries, many of which draw inspiration from the Caribbean and Latin America.

By Brett Anderson and Christina Morales

MIAMI — The Covid-era spike in fancy-restaurant openings by out-of-town operators has been central to Miami’s renown as a boom town. But if you’re searching for what makes eating distinctive in this bustling metropolitan area, you won’t find it at the Michelin-starred sushi pop-up at Thomas Keller’s place in the Four Seasons Hotel.

Instead, explore Miami’s diverse array of bakeries. What you’ll discover — French-style pastries, Mexican conchas, Jamaican patties, Venezuelan cachitos — is a window onto the region’s many connections to the world outside. In this American capital of the Latin-American and Caribbean diaspora, artisan bread-baking thrives, pastelitos outnumber croissants and guava is a common denominator. 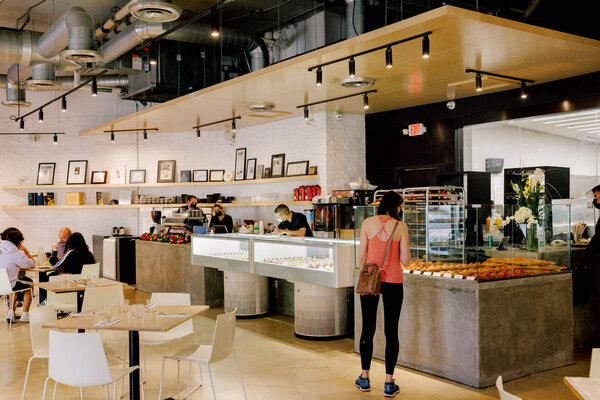 When the pastry chef Antonio Bachour parted ways with his first business partner in their bakery in the Brickell neighborhood, a customer missed his ornate desserts so much that he practically begged Mr. Bachour to open his own place. The customer, a real estate developer, offered an airy storefront space on the ground floor of a Coral Gables office building he owned; Bachour opened there in 2019. Glass display cases show off rows of colorful, picture-perfect petits gâteaux, and croissants with so many layers that they’re almost reminiscent of the rings of a tree. Mr. Bachour makes French-style pastries, featuring ingredients like tropical fruits, that evoke his youth in Puerto Rico, where he learned to bake in his father’s business. He credits baking with helping him recover from a brain tumor at age 17. “I wake up every day like it’s the first day, with passion,” he said. “That’s the most important thing.”

You can find no-frills flaky pastelitos, soft Cuban bread and gooey croquetas nearly everywhere in Miami, but Andy Herrera opened Breadman in 2015 with bigger dreams. “I felt like something was missing,” he said, “and I wanted to add the flavors I liked.” His bakery serves Cuban American takes on the classics in Hialeah, one of the most staunchly Cuban areas of the county. You can’t go to your abuelo’s bakery and find pastelitos with Nutella or pizza filling. His vanilla cake, surrounded by ham croquetas, sounds Frankenstein-ish, but actually hits all the sweet and savory notes that Cuban bakeries are known for.

The chorus of cultures energizing the Miami area’s bakery scene is audible in the sound of people ordering at this Venezuelan-French bakery in suburban Doral. The bâtard is “campesino” on the menu; the kouign-amann, “palmerita.” It’s wordplay that the owner, Jesús Manuel Brazón, said was necessary to coax his mostly Latin American customers to try the French-style baked goods that are a specialty of both him and his father, Manuel. They work alongside Mr. Brazón’s mother, Scarlet Rojas (the cachito expert), in a boundary-blurring, two-year-old bakery that also excels at croissants and pastelitos (which some customers call empanadas). A second location is scheduled to open in the city’s MiMo district in March.

Edda and Lucila are household names in Miami, famous for their renowned vanilla rum cakes, a centerpiece at any large Latino family celebration. The white cakes are soaked in rum syrup, creating an incredibly moist dessert with a durable shelf life. Edda Martinez and Lucila Venet Jimenez have built their bakeries separately, but started out working together, selling cakes baked from home and sharing recipes. When a competitor reported them to the county in the early 1990s, before home food businesses were allowed, they decided to open a bakery together. Their partnership (and friendship) ended soon afterward, resulting in two bakeries not far from each other with nearly identical cakes.

This destination in the farming community of Homestead, at the edge of the Everglades, is open only during South Florida’s growing season, from late October to April. When long lines form, as they commonly do around the holidays, it’s for baked goods like soft dinner rolls, guava pies and, more than anything, hot-and-sticky cinnamon rolls. The recipe has evolved since the rolls were introduced in the 1960s (they’re no longer topped, as they once were, with crushed pineapples). “We’re not a real bakery,” said Thomas Blocker, one of four owners of the family-run farm. “We’re more like Grandma’s big kitchen.”

This tiny bakery is a breath of fresh air in Little Havana, where many of the restaurants and bakeries are Cuban. Jaime Reynoso Pérez and his wife, Jocelyn Mendoza San Vicente, opened the bakery in 2008 inside a Mexican restaurant, Mi Rinconcito Mexicano, where they make the sweet breads from their native Mexico. They use at least five different doughs for the breads, specializing in national classics like conchas, but also more regional delights from Oaxaca and Mr. Pérez’s home in Veracruz. Miles from where most of the county’s Mexican community resides, this bakery has benefited from the growing number of Latinos in the city who are curious about their breads and style of baking, allowing it to thrive in the pandemic.

Naomi Harris opened this neighborhood bakery five years ago, sensing that residential Coral Gables, near where she grew up, would embrace the style of baking she learned while training in far-flung locations, including Alaska and rural England. Her meticulous approach — she hand-mills grains for flour, and uses wild yeasts — is evident in fragrant, gorgeously crusted loaves of bread, crackly croissants and irresistible desserts. (The lemon polenta cake is popular for good reason.)

When Taste Rite Bakery opened in Miami Gardens, in 1996, the business offered a sampling of food from Lynden Gordon’s native Jamaica, including stewed oxtails and jerk chicken. To stand out amid a spike in Jamaican restaurant openings in the city, just north of Miami, Mr. Gordon and his wife and partner, Jennifer, narrowed Taste Rite’s focus to Jamaican baked goods in the mid-2010s. The six South Florida locations (two in metro Miami) are best known for hot-from-the-oven Jamaican patties. They are distinguished by their unusually flaky crusts and wide selection, which run from traditional fillings like callaloo and ackee to a beef-and-cheese mixture that imitates a cheeseburger.

This kosher bakery and cafe is essentially a landmark in booming Wynwood, just north of downtown, and a living tribute to Miami’s once-thriving Jewish culture. Its owner, Zak Stern, is a local baking pioneer whose sourdough and country loaves are found in grocery stores and in restaurants across Miami; Manuel Brazón of Caracas Bakery is a former apprentice. Come for the bagels, the chocolate babka and the fantasia of murals and graffiti encircling the bakery — and then buy a crusty loaf or two to take home.