Emmanuel Macron was filmed struggling to walk past a mob of Beirut citizens trying to address the French President during his visit on Thursday. Mr Macron was the first foreign leader to head to Lebanon following the catastrophic blast that left more than 100,000 people homeless and killed over 150 locals. The President could be seen walking down one of the worst-affected areas, Gemmayzeh street, surrounded by his security detail trying to make way for the French leader through the mob.

The crowd could be heard chanting against Lebanese President Michel Aoun as they called for “revolution”.

Mr Macron announced his visit on Wednesday, saying he wanted to show his country’s solidarity with Beirut in the aftermath of the blast.

During his visit, President Macron said he is planning to spearhead efforts to collect aid in support of the former French protectorate.

“I wish to help organize international aid,” he said while noting that “beyond the explosion the crisis is grave.”

JUST IN: EU’s status as trading force in doubt after HALLOUMI row over Canada trade deal 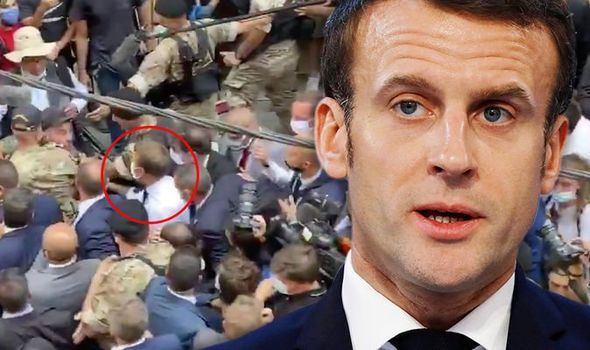 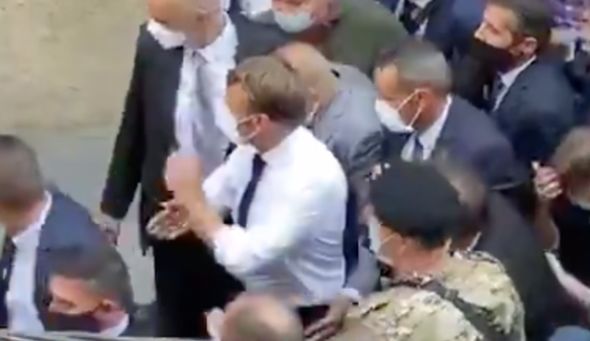 In addition to the coronavirus pandemic crippling health services, Lebanon has also been undergoing a lengthy economic crisis which has left nearly one million people unable to buy basic necessities, according to a recent report from Save the Children.

Mr Macron continued: “This visit is the opportunity to have a frank dialogue and be demanding towards Lebanese political forces and institutions.”

During his walkabout, the French President also guaranteed French is will not be allowed into “corrupt hands” as he called for a new “political pact” with political insitutions.

Beirut’s port area was entirely levelled after what are believed to be 2,700 tonnes of highly explosive chemicals blew up amidst an ongoing fire in a nearby firework factory.