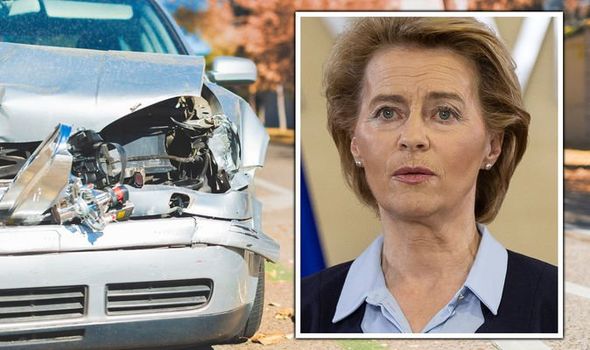 Mr Jones was responding to the report from Eurostat, the official statistics agency for the European Union, which claims “The EU’s roads are among the safest in the world and have generally become safer over time.”

The MP for Clwyd West said: “This is more than a little disingenuous. What they fail to say is that UK roads are far safer than those in the EU – by a country mile.

“On average your chance of dying in a road accident in the EU is getting on for double that in the United Kingdom.”

The Eurostat report gives figures for road deaths in all of the 242 ‘regions’ of the European Union.

The average in 2018 for the United Kingdom was 28.0 deaths per million inhabitants. However across the EU27 countries the number was almost double, at 55.1.

When it comes to the safest roads however, the UK dominates the EU’s list, appearing a total of 22 times out of 50 – more than any other member state.

“When it comes to road safety, it seems that the EU still has a lot to learn from the United Kingdom.”

With daily and annual deaths now being talked about as a result of the Covid crisis, and with the effects of Storm Arwen on roads in parts of the UK and the EU, Eurostat’s publication of its latest road death statistics reveals some timely and disturbing facts.

Mr Jones added: “As usual the EU Commission seeks to present itself in the best possible light, regardless of the reality, rather than addressing the problem and doing something meaningful to fix it.

“The simple fact is that you are far less likely to die on Britain’s roads as a result of our high standards and the safety measures we’ve taken over the years and are continuing to take. And these standards have had nothing to do with the EU.

“It’s interesting that Ursula von der Leyen appointed a Commissioner of Transport from the EU country with the worst record for dying on the roads: Romania.”

The EU’s Commissioner for Transport is the Romanian Adina Vălean. Romania is the Member State with the worst record for road traffic fatalities, with almost 100 per million people per year. By contrast, the UK’s figure is just 28 per million.

Prior to her appointment as EU Transport Commissioner in 2019 Ms Vălean had no experience in transport and her only experience outside politics was as a teacher in the Nineties. Since then she spent 20 years as a member of the European Parliament before being chosen as a Commissioner by President Ursula von der Leyen two years ago.

Romania and Bulgaria are the countries where British tourists need to be most alert, with Ireland, Denmark and Sweden being the safest EU27 countries to drive in. The United Kingdom was the safest in the entire European Union at the time, according to the official EU figures for 2018.

While Romania’s roads are the most dangerous, the most worrying individual region to live in for road traffic fatalities is not within any of the Eastern European member countries, but in Belgium – the country which hosts the EU Commission and most of its institutions and agencies.

In Belgium’s worst region for deaths on the road in 2019 you were five times as likely to die in a car accident as you were in the UK, according to Eurostat’s figures.

In the last few years the EU has recognised the problem with road fatalities.

The European Parliament has voted overwhelmingly to back a Commission document setting out the EU road safety strategy for the next ten years. This was published in June 2019 and updated in December last year.

The headline targets are to cut serious injuries and deaths by 50 percent by 2030, along with a ‘vision zero’ by 2050 approach.

A spokesman for the EU Commission told Express.co.uk: “The target for zero road deaths by 2050 is ambitious, but this is definitely a target and it’s important to retain strong ambitions.”