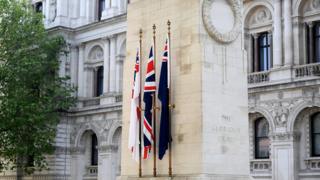 Leaders across Europe are marking the 75th anniversary of VE Day, as much of the continent remains under lockdown due to coronavirus.

A two-minute silence will be held in the UK, followed by an address from the Queen.

Closed ceremonies are also being held by the leaders of France and Germany, Emmanuel Macron and Angela Merkel.

Other events are also being held, but large public gatherings remain forbidden.

On 8 May 1945 Britain and its Allies formally accepted Nazi Germany’s unconditional surrender after almost six years of war.

To mark the occasion, President Macron will lay a wreath at the tomb of the unknown soldier in Paris – the ceremony closed to all but a small group of officials.

Chancellor Merkel will also lead a ceremony at Germany’s central War Memorial. In Berlin, residents have been given an unprecedented public holiday, although this in not in place across the rest of the country.

A similar celebration, known as Victory Day, is held on 9 May in several former Soviet countries including Russia, Ukraine and Belarus.

Russian President Vladimir Putin had planned to hold a major parade in Moscow on Saturday, attended by President Macron and Chinese President Xi Jinping. But the event – showcasing over 15,000 troops – has been postponed due to the coronavirus pandemic.

Instead, a military flyover will take place and Mr Putin will lay flowers at a war memorial near Moscow’s Red Square.