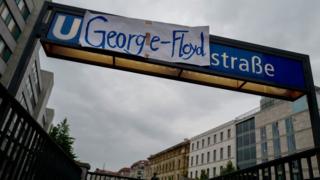 The use of an out-of-date term for North Africans was seen as racist or pejorative.

But when the transport authority said it would be renamed after composer Glinka, its choice was ridiculed.

Glinka may have died around the corner, but he was also anti-Semitic. Now the authority has rowed back, saying a final decision is yet to be made.

In an apparent u-turn on renaming the U-Bahn station Glinkastrasse, Berlin’s BVG said it was just one possible option and it was open to discussion. No signs had been switched yet, and there was still plenty of time before new timetables were printed.

Asked why Russian composer Mikhail Glinka had been chosen in the first place, spokeswoman Petra Nelken pointed out that a street with his name on was nearby.

“We’re not responsible for street names,” she told RBB24, adding that until recently there had been no indication on his Wikipedia page that he might have been anti-Semitic.

Why change the name?

The underground station in the Mitte area of Berlin has had several names since it was opened in 1908. It was renamed twice by the communists when they ran East Berlin.

It was last renamed in 1991, and while the campaign for a new name dates back several years, a recent petition has attracted 10,000 signatures. Things came to a head with anti-racism protests in the wake of the killing of George Floyd in Minnesota.

The name of the street itself is thought to date back to the early 18th Century, when black slaves or former slaves may have lived there, Spiegel website reports.

The transport authority said the proposal had come from the workforce and by getting rid of the name it was sending a clear signal against racism.

It also had the support of centre-left families minister Franziska Giffey, who agreed it was a powerful statement against racism and she thought the street itself should also be renamed.

Berlin Green leader Antje Kapek refused even to use the name of the street, saying it was “simply unbearable”.

Anti-racism campaigners from the Decolonise Berlin group have their own proposal for the station. They want it named after the first black scholar at a Prussian university – Anton Wilhelm Amo.