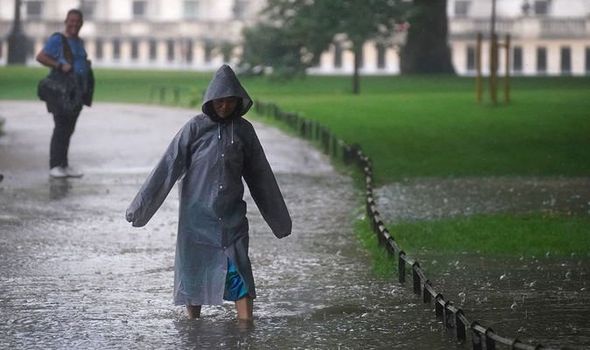 Fierce thunderstorms swept across the south of England, sparking torrential downpours and lightning strikes. One burnt down a brewery in East Sussex. And with flooding affecting much of London, the Met Office warned that the danger was not yet over. It issued a thunderstorm warning for the next three to four days before settled conditions are set to return.

The wettest part of the country was St James’s Park in the capital, where 41.8mm of rain fell on Sunday. The average rainfall for the whole of July in London is 45mm.

Prime Minister Boris Johnson tweeted: “My thoughts are with everyone affected by the flooding in London and the South-east.”

Torrents of water led to chaos across the capital, with five people rescued from a submerged car in Worcester Park and passengers helped to safety from a stranded bus in Hackney Wick.

Newham hospital tweeted: “We’re still here if you need us but to help while we fix things, please attend a neighbouring hospital if possible.”

Leytonstone’s Whipps Cross issued a similar appeal, saying it was experiencing “operational issues due to the heavy rainfall”.

Those with flooded homes spoke of their dismay. Jackie Collins, 64, of Leytonstone, was still throwing out water from her house yesterday. She said: “The rain was extremely heavy and roads began to flood. Then around 10 houses, including mine, started letting in the water and the whole ground floor is flooded.”

Another woman whose childhood home was devastated during the first family get-together in 18 months said it was “heartbreaking”.

Nicola Thorogood, 33, was at her parents’ house in Walthamstow, east London, with two sisters and their children. The family tried to keep the water out, but gave up and tried to save as many belongings as possible.

London Fire Brigade said it had taken about 300 flood-related calls in a few hours. People were warned not to drive in hazardous conditions. Many of the capital’s roads closed including the Blackwall Tunnel, the A12 and parts of the North Circular.

In Eridge, East Sussex, a brewery burned to the ground after a lightning strike. Fire crews were called to Good Things Brewing Co just after 1pm on Sunday.

Devastated brewery founder Chris Drummond said: “Our beloved 17th- century barn, the home to our brewery, was struck by lightning and has sadly burned to the ground.”

The Environment Agency said six flood warnings remained in place, with two in London, near Beverley Brook at West Barnes and Worcester Park.

A Met Office spokesman said: “The current dominant weather pattern of the UK is set to be a spell of low pressure, bringing with it some more persistent rain from Tuesday and into Wednesday.”