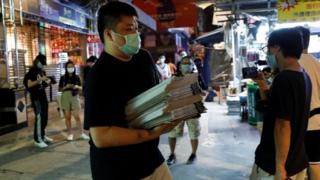 Hong Kong’s Apple Daily newspaper has vowed to “fight on” after the arrest of owner Jimmy Lai under a controversial security law imposed by Beijing.

In extraordinary scenes streamed by the paper on Monday a handcuffed Mr Lai was led through his newsroom as nearly 200 police officers raided the building.

The pro-democracy activist was among 10 people arrested on charges including colluding with foreign forces.

The arrests have sparked condemnation of the escalating crackdown on dissent.

On Tuesday, Apple Daily’s front page showed an image of Mr Lai in handcuffs with the headline: “Apple Daily must fight on.”

In some parts of the city Hong Kongers were seen queuing for a copy, as vendors reported selling out of the popular tabloid founded by Mr Lai.

The arrest of Mr Lai, who is viewed as a hero by many in Hong Kong for his criticism of Beijing’s top leadership is the highest-profile use of the new legislation so far.

Chinese state media outlet the Global Times on Monday described him as a “riot supporter” whose publications have been “instigating hatred, spreading rumours and smearing Hong Kong authorities and the mainland for years”.

Hours after his arrest prominent youth activist Agnes Chow and Wilson Li, a freelance journalist, were also arrested under the same law.

The arrests renewed criticism from Washington, London and the United Nations about heightened attacks on the city’s freedoms.

“Further proof that the CCP has eviscerated Hong Kong’s freedoms and eroded the rights of its people,” he wrote.

Similar sentiments were expressed in Britain. “This is further evidence that the national security law is being used as a pretext to silence opposition,” a spokesman for Prime Minister Boris Johnson told Reuters. “The Hong Kong authorities must uphold the rights and freedoms of its people.”

The controversial security law introduced to Hong Kong in June had already prompted some of the city’s highest-profile activists to flee overseas in anticipation of a broader clampdown on the city’s freedoms.

Speaking from London, pro-democracy activist Nathan Law told the BBC the arrests were “definitely a retaliation towards the sanctioning from the US on Hong Kong officials”.

The US had earlier sanctioned 11 Chinese officials and allies in Hong Kong for curtailing political freedoms.

Mr Law also described it as the latest step “to quash the freedom of Hong Kong”, silence Hong Kongers and create a larger “politics of fear”.

“We repeat our calls for the authorities to monitor and review the operation of the security law,” Jeremy Laurence, spokesman for the office of UN High Commissioner for Human Rights Michelle Bachelet, told Reuters.

“And to amend it if necessary to ensure there is no scope for its misuse to restrict human rights guaranteed by international law and the Basic Law of Hong Kong.”