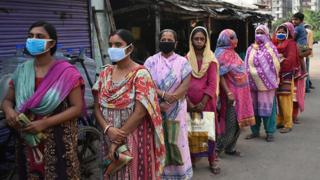 At the weekend, India extended the nationwide coronavirus lockdown by another fortnight, but said that domestic helpers can now return to work. The decision has had millions of middle-class homes debating a key question – to let the workers in or not? The BBC’s Geeta Pandey in Delhi explains the dilemma.

A friend once said that if she had to choose between her husband and her maid, she would pick the latter.

The comment was made as a joke, but it’s an example of how much Indians depend on their domestic helpers.

According to official estimates, more than four million people are employed as domestic helpers, often for very little money, in middle-class and affluent Indian homes. Unofficial estimates put that number at a whopping 50 million. Two-thirds of these workers are women.

The relationship between the maid and the “mistress/master” is one of interdependence – extreme poverty compels unskilled slum-dwellers and rural poor to seek employment as domestic help as a way of earning a living and for the middle-class, it provides cheap labour that keeps their homes running smoothly.

But for the past six weeks, millions of middle-class homes have had to manage without their maids, cooks, nannies, nurses, drivers and gardeners as India imposed a strict nationwide lockdown to arrest the spread of the coronavirus.

To begin with most accepted the restrictions, thinking it was just for three weeks. Some Bollywood stars even posted Instagram videos of themselves, cooking and cleaning and doing the dishes.

But with the lockdown extended twice already, and the idea sinking in that this is going to be a long haul, middle-class India has begun to miss the maids.

Conversation has also veered towards how elderly people living alone are coping. And how those in poor health are managing without help.

Then, there is the distress that domestic helpers are facing, leaving them with little choice but to get back to work.

“Many have lost their jobs and many others say they are not being paid salaries for the lockdown period,” Meenakshi Gupta Jain, chief of Helper4U, an online platform that links domestic workers with employers, told the BBC.

For the past month, their Covid Helpline WhatsApp number has been receiving 10 to 15 messages daily from maids, drivers and cooks seeking help.

“They say they have run out of money. What do we do? How do we feed our children? We guide them to local charities in their area who can help them get some free ration or cooking gas,” Ms Gupta Jain says.

Sonika Verma, a domestic helper in Delhi who resumed work on Monday, says she counts herself as lucky since her employers have paid her salary for the lockdown period.

“I was very tense all these weeks. My husband drives an auto-rickshaw, but he’s been sitting at home because autos are not allowed to ply. I also couldn’t go to work and I was afraid what would we do if I lost my job too,” she told me.

Her sisters, she says, have not been paid for the lockdown period.

“Their employers paid them for the number of days they had worked in March and didn’t pay anything for April. They also said they would pay only once they resume work, but they haven’t called them back to work yet,” she said.

The reason her sisters have not been called back to work yet is because there is a raging debate taking place in many residential societies over whether it’s prudent to allow domestic helpers to come into people’s homes or not?

Some have pointed out that “restrictions may be gone, but the coronavirus hasn’t” and letting people in from the outside of their gated middle-class colonies could bring in the deadly Covid-19 virus to an area which has so far managed to remain infection-free.

But, some residential groups say the needs of the old and infirm cannot be ignored. Most Indian middle-class homes are not equipped with gadgets like dishwashers and washing machines and housework can be tough for them.

Anil Tiwari, president of the posh ATS Greens building society in Noida on the outskirts of the Indian capital, Delhi, says they are “positively thinking about allowing the maids to come in”.

“We have 735 apartments and there are many senior citizens who live here alone. Many of them are facing a lot of hardships so we have to take that into account.”

Among them is Brigadier (retired) Kuldeep Singh Chokkar who describes his situation as “extremely challenging”.

He’s 80, a cancer survivor with a pacemaker, and lives with his wife who’s “75 and has her own health issues”.

“If we were younger, we’d manage fine, but we are facing a lot of problems maintaining our home,” he told me over the phone.

Until the lockdown, Brig Chokkar had a part-time maid, a gardener and a car cleaner coming in daily.

“Absolutely,” he says when I ask him if he is looking forward to their return. “It will make my life a lot easier.”

My neighbour, retired school teacher Pinki Bhatia, is a little worried, though, about opening her doors to outside help just yet.

She has a bad back and has been struggling to manage without any help, she told me.

“But we have no choice. We’ve been doing everything on our own – cooking, sweeping, swabbing, dishes and laundry.”

Mrs Bhatia is in her mid-60s and her husband is over 70, hypertensive and has heart problems.

The government advisory on coronavirus says those above 60 are more at risk of infection and should not go out, so the couple have been confined to their home for the past six weeks.

“A neighbour’s driver helps us by bringing milk and groceries from the local market,” Mrs Bhatia said.

She is in two minds about whether to let her maid return to work or not.

“My children live in Mumbai and Switzerland. I called them and asked them, ‘what should we do’? They said, ‘let’s wait for another week and see how things unfold’. So we are going to wait another week,” she said.

Ms Gupta Jain says when refuse collectors and vegetable vendors are allowed to come in, why are maids and drivers being penalised?

“You give them masks and hand sanitisers and a set of clothing that they can wear when in your home. You take all the precautions. But it’s time to let them back in.”