Fourteen-year-old daughter of daily wage worker in Kerala found dead near her home on the first day of new school term. 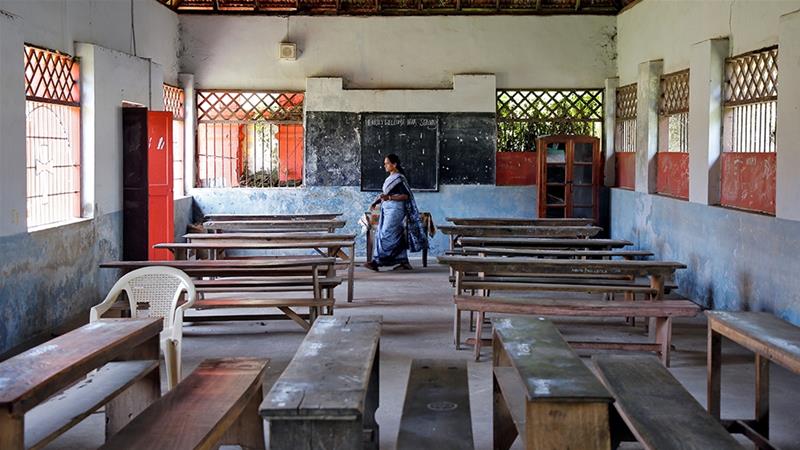 Students have protested in southern India after the suicide of a teenage girl who was unable to attend online classes because she did not have access to the internet or television.

Schools have been shut across India since the country locked down its 1.3 billion people on March 25 to curb the spread of the coronavirus, leaving millions of children whose families cannot afford expensive devices with no access to education.

Among them was Devika Balakrishnan, the 14-year-old daughter of a daily wage labourer in the southern state of Kerala who was found dead near the family home on Monday, the first day of the new school term, having apparently taken her own life.

Indian media reports said the teenager went missing from her house on Monday afternoon. Her burned body was later recovered from a deserted spot near her house.

An empty bottle of kerosene was found near her body.

“There is a television at home, but that has not been working. She told me it needed to be repaired, but I couldn’t get it done. I couldn’t afford a smartphone either,” said the girl’s father, who belongs to the underprivileged Dalit community (formerly referred to as “untouchables”), according to media reports.

“I don’t know why she did this. I said we could look at options, like going to a friend’s house.”

The young girl’s mother had given birth a few weeks ago, and the family was suffering financially, said a report by the NDTV network.

Student activists in Kerala took to the streets to protest her death, which has highlighted the inequalities of the lockdown, with pupils in poor, rural areas far less likely to be able to learn online.

“The government action has put the poor students under stress and pressure,” said Abhijith KM, who heads the Kerala Students Union and was among the protesters.

“It should enable the poor students to obtain computers at interest-free loans to avoid similar cases in future,” he told the Reuters news agency by phone from Kozhikode district.

He said the group had organised protests in all Kerala districts, but limited the number of protesters to 50 in each area so they could follow social distancing rules.

Police said they used batons to disperse protesters in northern Malappuram district, where the victim was from.

One officer was injured when about 28 students tried to enter the district education office, Malappuram superintendent of police Abdul Kareem said.

India has begun easing its coronavirus lockdown, which was among the strictest in the world and left millions without work.

But schools have not yet reopened, and Kerala began its academic year on Monday with classes broadcast on television and online for more than four million students.

The protesters accused the government of not checking whether all students had the means to attend them.

Kerala’s education minister expressed grief over the teenager’s death and ordered an investigation.

He said remote classes were being conducted on a trial basis and that students who missed them would be given opportunities to attend again.

Kerala is one of India’s wealthier states and more than half its inhabitants have access to the internet, according to a 2018 report by the Internet And Mobile Association of India.

It also has among the highest rates of internet use by women, the same report said.