Sources within the Islamic Revolutionary Guards Corps (IRGC) have revealed intelligence protection officers are personally delivering the hard currency to support cash-starved Hezbollah fighters in Lebanon and Syria. The daily deliveries are helping to finance newer and more sophisticated missile systems as well as military infrastructure in Syria, including bases.

Official figures say the coronavirus pandemic has already claimed more than 6,000 lives in the region.

Additional millions are being delivered in “special packages” or via Sarrafies – money exchanges – through transactions facilitated by Iranian businessmen in Beirut, says opposition group The People’s Mujahedin Organisation of Iran (MEK). Reports by IRGC sources describe a “money tube” using passenger and cargo flights from Iran to Hezbollah-controlled Beirut airport. Other funds are being delivered into Syria.

Iran had a gross domestic product of £1.3trillion in 2017, with 60 percent of its national assets controlled by four main institutions. It also has a sovereign wealth fund worth £90billion which was forced last week to pay £1.2billion to give Iranians economic relief.

But the triple whammy of US sanctions, tumbling oil prices over coronavirus pandemic and the economic consequences of the virus at home have seen Hezbollah’s cash supply cut by 40 percent, from an annual £575million to £400million over the past two months. And it has emerged that General Qassem Soleimani, the notorious IRGC Quds Force commander killed by the US in January, had applied for a loan to pay the wages of mercenaries in Syria last year. 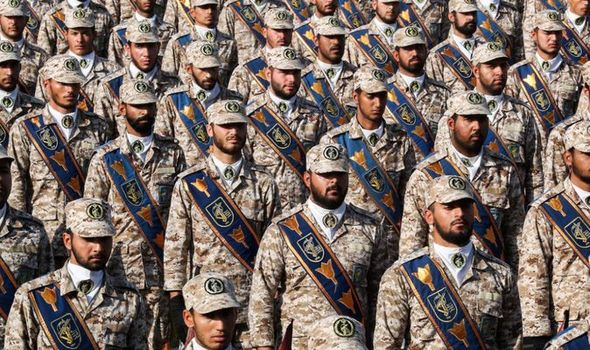 Parviz Fattah, of the Mostazafan Foundation which controls manufacturing and industrial firms in Iran, confirmed details of the loan in a state TV interview on February 14.

Alireza Nader of the US-based FDD think tank, who is an expert on Iran, said: “The Islamic Republic’s extensive financial support for Hezbollah shows exactly what kind of regime we’re dealing with and puts its IMF loan request into context.

“It will spend money on foreign adventures and terrorism, equipping Hezbollah with sophisticated missile technology and military bases in Syria as millions of Iranians go hungry.”

Dr Sanam Vakil, deputy director of Chatham House think tank’s Middle East and North Africa programme, warned: “It would be a mistake by any foreign government to assume Iran will alter its strategic, regional and security priorities because of its economic crisis – and that includes finding Hezbollah.

“Iran has been identified as the regional epicentre of the pandemic and it’s likely that the regime has underestimated the number of Covid-19 deaths.

“But we won’t know for sure until it takes its national census next year.

“It was criticised internally for its slow reaction to the crisis and the regime is now using the crisis as an opportunity to rehabilitate itself with people who have become disillusioned, selling the narrative that sanctions are to blame.”