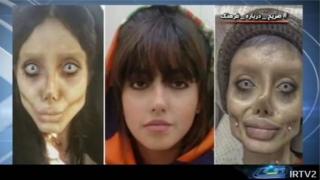 An Iranian Instagram star has contracted coronavirus in prison, her lawyer says.

Fatemeh Khishvand, better known by her Instagram name Sahar Tabar, came to fame after posting photos in which she resembled what has been described as a zombie version of Angelina Jolie.

Ms Khishvand was arrested in late 2019 for crimes including blasphemy and instigating violence.

But the head of the prison where she is being held denied she was infected.

“The news released by the lawyer of Fatemeh Khishvand is not true and I deny it,” Mehdi Mohammadi, the head of Shahr-e Rey women’s prison, told Iran’s ISNA news agency.

Iran has suffered the highest coronavirus death toll in the Middle East, with new figures announced by a health ministry spokesman on Saturday bringing the total to more than 5,000. However, there are fears the true number could be much higher.

Ms Khishvand’s lawyer Payam Derafshan wrote an open letter to Iran’s judiciary, which he posted on his Instagram account.

He said he had been told by Ms Khishvand’s mother that his client had been moved to a quarantine section of the prison after displaying symptoms of the virus.

He added that Ms Khishvand – who was, he said, a minor when the “crimes” were committed – had not been eligible for temporary release because her case was still being processed.

In March, Iran released 85,000 prisoners – including including British-Iranian charity worker Nazanin Zaghari-Ratcliffe – in a bid to stem the spread of the virus.

Ms Khishvand made international headlines in 2017 when her heavily edited Instagram photos went viral. Her account has since been deleted.

While many social media users voiced concern amid reports she had undergone as many as 50 cosmetic surgeries, she told Russia’s Sputnik News that the images were the result of “Photoshop and makeup”.

She joined a long list of online Iranian influencers who have fallen foul of the law.