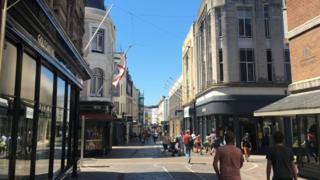 Hairdressers and indoor restaurants in Jersey will be allowed to reopen from 12 June, the government has announced.

It comes as the island moves to level two of its four-tier lockdown exit strategy.

Under level two, more businesses will be allowed to reopen including beauty salons and cinemas, as well as places of worship.

Jersey has been under level three of the lockdown since 11 May, initially permitting islanders to spend up to six hours outside their homes for any outdoor activity.

On 28 May, the government removed the limit on time spent outside.

Non-essential shops have also begun to open their doors under level three of the lockdown, and restaurants have been offering outdoor dining.

Libraries, concert venues, museums, and galleries will all be allowed to reopen under level two with “strict physical distancing” in place, the government said.

Some leisure businesses and venues that involve “close personal contact” may be allowed to start work again if they are able to follow “best hygiene practices”, Senator Lyndon Farnham said.

Social distancing measures will remain in place on-island, with people expected to keep 2m (6ft) apart from those outside their household.

Last week the States announced it would no longer be illegal for islanders to visit another person’s home, although the government continues to discourage it.

Senator Farnham said the move to level two was based on medical evidence, with only two known active cases of the virus in the island at present.

He said: “This is evidence that our ‘contain, delay and shield’ strategy has so far thankfully proved the worst predictions wrong and enabled us to protect islanders’ health, particularly those members of our society who are most vulnerable.”