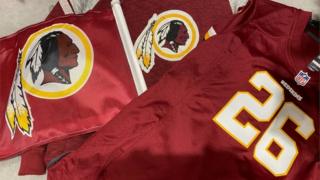 Last week, the Washington DC-based team said it would be reviewing its name following demands from sponsors.

It has faced years of pressure over a name seen as offensive to Native Americans.

The decision to review the name comes amid a fresh focus on racism, sparked by worldwide protests.

Walmart said on Twitter that it would be “discontinuing the sale of items that reference the team’s name and logo”.

Target told CNN in a statement that they were “in the process of removing the items from our assortment”.

The team agreed last week to reconsider its name after its major sponsor, FedEx, called for a name change. The request was made on behalf its own investors.

FedEx has naming rights to the Redskins’ 82,000-seat stadium in Maryland.

Earlier this month, 87 investment firms and shareholders wrote to FedEx, along with fellow Redskins’ sponsors Nike and PepsiCo, calling on the firms to sever ties with the team, according to trade publication AdWeek.

Dan Snyder, owner of the Washington Redskins, has resisted calls throughout the years to choose a new name.

However officials last Friday said they would “undergo a thorough review”. This is a change from Mr Snyder’s stance in 2013, when he vowed to never change the team’s name.

Many US sports teams were named after indigenous peoples, adopting logos and mascots to match, but in recent years there has been increased sensitivity to those thought to be crude or stereotypical.