The UK baked in highs of 33C this past week, but the sunny skies and hot weather has been replaced by thunderstorms and heavy rain this weekend. This onset of unsettled weather is forecast to continue into next week, with two days of weather warnings for rain in place, with flood alerts also issued.

A Met Office meteorologist said: “Looking ahead into Sunday, it’s going to be an unsettled day, there will be heavy rain particularly across the northwest of the UK.

“A chilly start to Sunday morning, outbreaks of heavy rain across the north and the west of the UK, a rainfall warning in force right through Sunday and into Monday morning.

“There’s risk of flooding as we go through the day in places, best of the bright skies across southern England and Wales but also a scattering of showers here.

“Windy and cool for everyone, temperatures reaching 20 to 21c at the best so much cooler than it has been.” 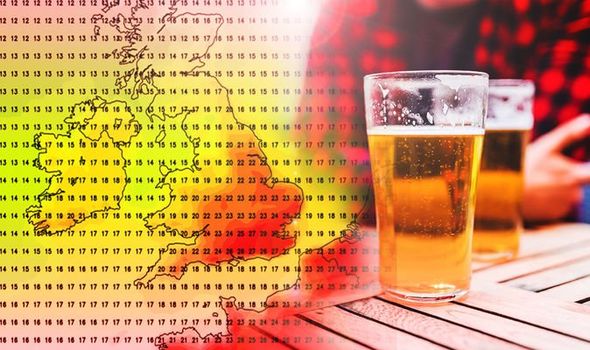 Speaking about the continuing unsettled conditions, the meteorologist warned conditions out and about could be difficult on Monday morning.

For the week ahead the spokesman added: “The outlook is for a fairly unsettled week to come, cooler than of late as well and often breezy.”

The yellow weather warning begins at 6am on Sunday and ends at 3pm on Monday, with 1.57 to two inches expected to fall widely.

A few places could see between 3.5 to five inches of rainfall during this period, especially over high ground. 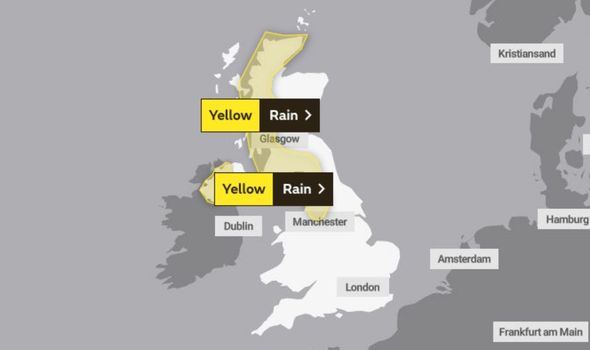 For Monday’s weather, Netweather forecasts low pressure over Scotland in the morning will “slowly move away across the North Sea by evening.”

There will be another windy day with heavy thundery showers or longer spells of rain spiralling around the low across the northern half of Britain.

Southern areas managing to stay mostly dry and breezy with bright or sunny spells at times.

Temperatures will be low compared to what the UK has had recently, with 15 to 19C at best.

But looking further afield, it seems this damp and dreary weather won’t be with us for too long.

The Met Office long-range forecast predicts the UK will see drier and warm spells heading towards the second week of July.

While rain, thunderstorms and colder temperatures are expected to continue over the next week, forecasts predict the weather will take a turn from next week.

Southern and Central England will start to see bluer skies towards the end of next week, with sunny weather sweeping in. 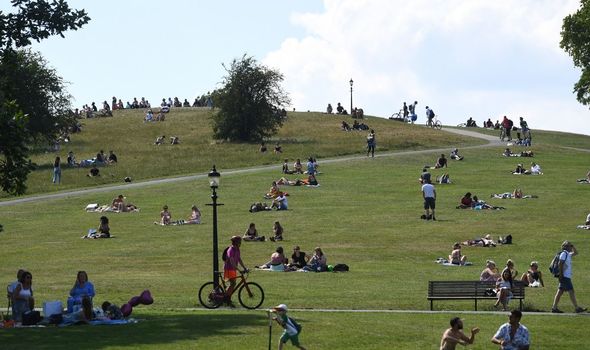 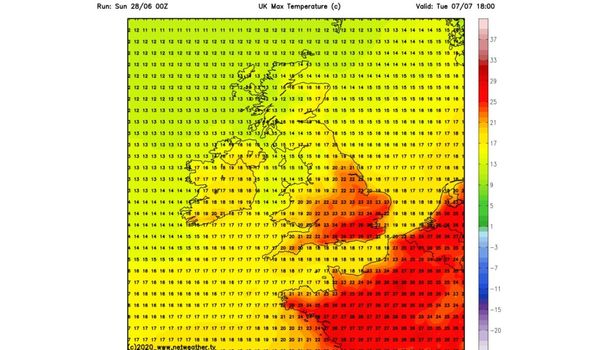 Temperatures will start to pick up from July 4 – perfect timing for all those planning their first trip to the pub amid the easing of lockdown restrictions.

And we could see warmer weather bring temperatures of up to 27C between July 8 and 10, according to data from WXCharts.

The Met Office forecast for July 2 to July 11 reads: “An unsettled start to the period, with showers or longer spells of rain, heaviest and most frequent for some western areas.

“There may be a very windy, wet spell for many late next week. Temperatures will vary around average for the time of year though the west will be mainly rather cool. 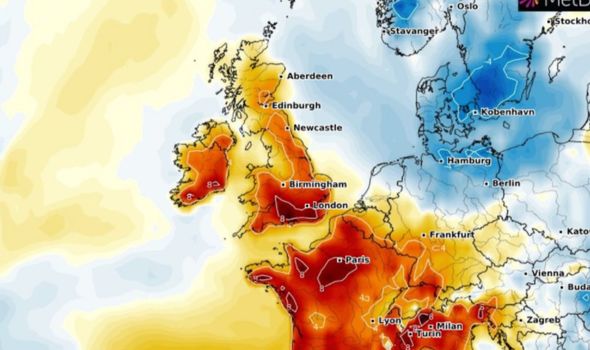 “There will, however, still be some drier and sunny interludes. Changeable weather will probably continue through the first weekend of July although the rain may become more confined to the west and northwest with the best of any drier, brighter weather more likely across the south and east of the UK.

“Into the following week there are signs that the weather may become drier, more settled and warmer again, particularly for southern and many central parts.”

July 2019 saw the highest temperature ever recorded in the UK – so Britain will have some going to break that record.

But with this week’s heatwave reaching a sweltering 33C, anything is possible next month.

The forecast suggests the warm weather will continue into the end of July, though changeable conditions could bring more thunderstorms.

The long-range Met Office forecast for July 12 to July 26 says: “It looks as if relatively dry, settled and warm conditions may be established at the start of this period, bringing some sunshine for most parts, particular southern and central areas.

“The northwest may still be more changeable with nearer normal temperatures.

“For the rest of July confidence is very low. However, conditions will more likely be rather changeable, bringing spells of rain or showers, mixed with drier and brighter interludes.

“Later in the period it is possible that there will be some longer, more settled spells allowing it to become warm at times.

“As is usual this time of year, there is always the chance of some thundery interludes, with these being more likely across the south.”