The Met Office said: “Spells of heavy rain are expected across southern England and parts of south Wales during Wednesday and into early Thursday.

“The heaviest rain is likely to develop during Wednesday evening and continue overnight before clearing away to the southeast by Thursday morning.

“Much of the area is likely to see 20-40 mm through this period. There is still some uncertainty in exactly where the heaviest rain will fall but there is the potential for some places to see as much as 50-70 mm of rain.

“The heavy rain will be accompanied by strong north to northeasterly winds during Wednesday evening and overnight.” 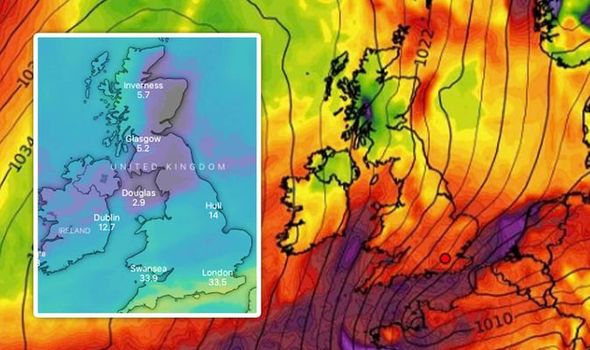 BBC Weather forecaster Carol Kirkwood said the UK can expect a Christmas washout this year as a band of rain moves in to England, Wales, Scotland and Northern Ireland later this week.

She said: “There is some rain in the forecast across many areas today and as we head up to Christmas day itself it is going to be mostly chilly and dry.

“That will be the case for Christmas Eve and Christmas Day, but we have some rain to get rid of before that.

“There is a band of rain moving across England and Wales which will eventually get into Scotland and Northern Ireland.

“In the northwest, we have got showers in the afternoon and brighter skies in the northeast.

“There is further rain and drizzle coming in across southern counties and strong gusty winds.