The Met Office has updated and extended snow and ice warnings across the UK as a deep chill heads for the country. Wintry showers are predicted to bring extremely cold conditions across the country with as much as two inches of snowfall expected in some regions.

The Met Office has three weather warnings in place on Wednesday and Thursday.

The first ice warning has been in effect from 4pm on Tuesday and runs until 11am on Wednesday, warning of icy surfaces which could cause difficult driving conditions.

The warning reads: “Wintry showers are likely to persist on Tuesday night, and as ground temperatures fall below freezing, ice is likely to form on untreated surfaces.

“Some wet snow may fall to low levels at times well inland but any settling will mostly be confined to high ground.

“Two to five cm snow is likely above 250 metres, and perhaps up to 10 cm in a few places above 400 metres over the north Pennines.” 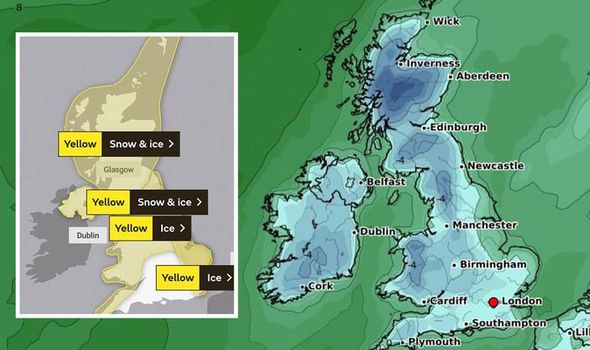 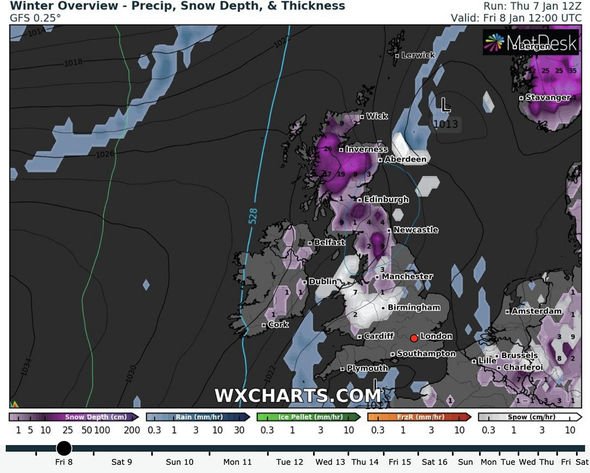 A second ice warning is also in effect on Wednesday.

The warning is in force from 4pm on Wednesday until 10am on Thursday.

The ice warning advises of icy services which may cause difficult driving conditions in places and may result in slips and falls.

The warning reads: “Further showers are likely on Wednesday evening and overnight, before becoming confined to East Anglia on Thursday morning.

“As ground temperatures fall below freezing there is the likelihood of ice forming on some untreated surfaces.

“Some of the showers may be wintry inland but the chance of any more than isolated very small accumulations of snow is very low.”

The Met Office ice warning is in effect across much of the country including: 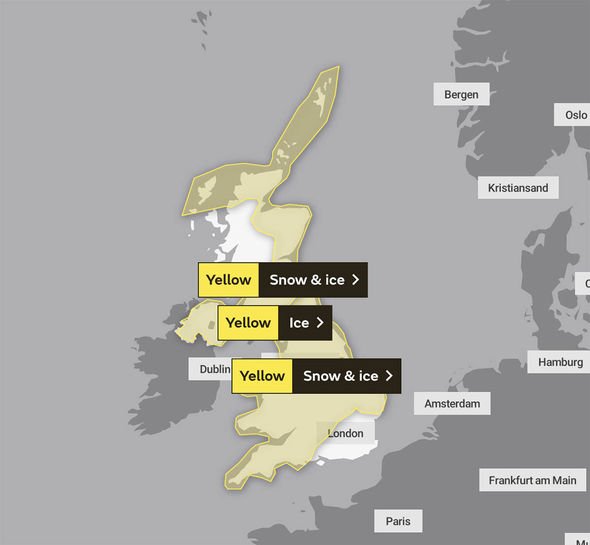 Another snow and ice warning was issued by the Met Office at 11am on Wednesday.

The warning is in force from 3pm on Wednesday until 11.59pm on Thursday.

The warning covers the northwest region of Scotland.

The Met Office warning reads: “A band of sleet and snow will arrive across northwest Scotland on Wednesday afternoon and move southeastwards across most parts of Scotland overnight, clearing southwards on Thursday morning.

“One to two cm snow is likely to settle at low levels quite widely with three to six cm above 200 metres and up to 10cm above 300 metres.

“Rain is more likely around some coasts, and snow may also turn to rain at low levels inland before clearing to leave a risk of ice on untreated surfaces on Thursday morning.

“Following the clearance of the rain, sleet and snow on Thursday morning, much of inland Scotland will be dry for most of the day.

“However, snow showers will then follow into northern Scotland on Thursday, especially during the afternoon and evening.

“A further two to five cm is likely at low levels with around 10 cm accumulating above 200 metres. This warning will likely be updated on Thursday.” 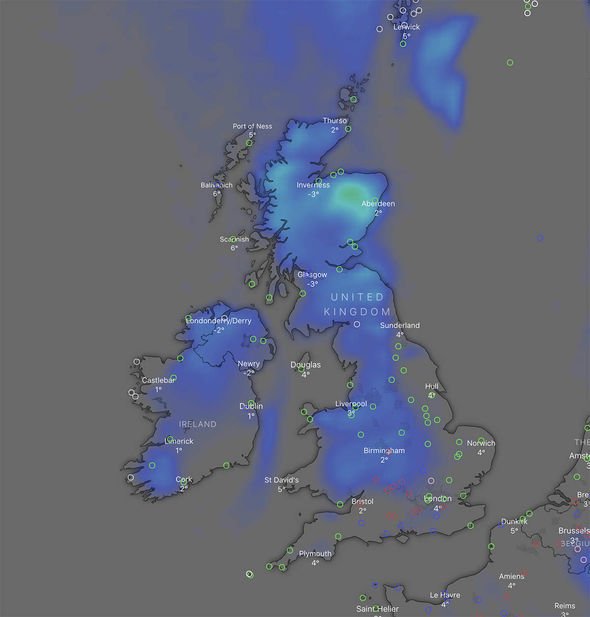 There is also a snow and ice warning in effect across Northern Ireland from midnight until 9am on Thursday.

The warning advises of snow and ice which may lead to difficult driving conditions.

The Met Office snow and ice warning reads: “A band of rain, sleet and snow is likely to push southeast across Northern Ireland on Wednesday night before clearing during Thursday.

“Away from some northern and eastern coasts, this will fall mainly as snow with accumulations of one to two cm possible.

“Two to five cm of snow is possible on hills above about 150m. Accumulating snow may well affect the Glenshane Pass.

“Snow should ease, whilst probably turning back to rain, early Thursday.

“Regardless of snow accumulation, after several cold days, ice is likely to be relatively widespread on untreated surfaces.” 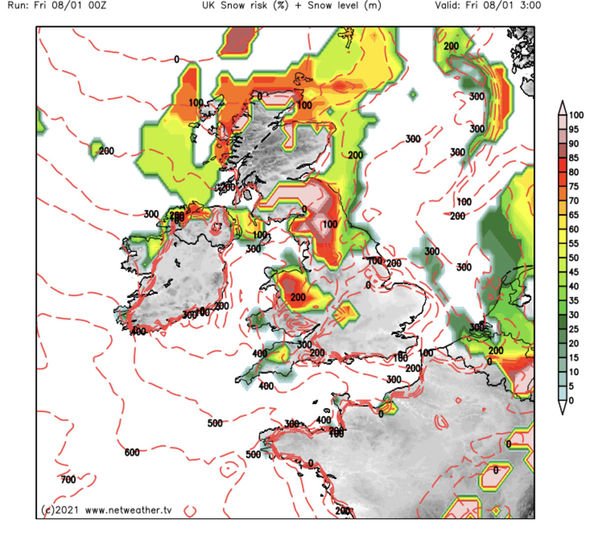 The Met Office forecast warns of cold conditions across many areas on Wednesday, with eastern areas seeing wintry showers.

The forecast reads: “Many central and northwestern parts dry with sunny spells, whilst further wintry showers affect the east.

Over the next few days, the cold conditions are expected to continue.

On Thursday, forecasters warn of a band of rain, sleet and inland snow moving south across Northern Ireland, Scotland and northern England through the day, with wintry showers following.

Otherwise, conditions will be dry and cold with sunny spells.

By Friday, there will be outbreaks of rain, sleet and snow across central areas on Friday.

The weather will become changeable and less cold in the north over the weekend but largely dry and cold in the south.