Terrifying video footage has revealed the apocalyptic scenes in Yerevan, the capital of Armenia, after a monstrous explosion tore through a market. The clip captured thick plumes of black smoke smothering the sky as the rubble remains of the building below erupted in a wall of flames. The surrounding street lay strewn with clumps of debris and dust as helpless onlookers stared in horror at the scene unfolding. Apparent explosions can be heard in the video and reports have speculated that the blaze started near a business where fireworks were stored, before the flames quickly grew out of control.

As emergency services have continued efforts to bring the fire under control, at least one person has been confirmed dead.

Dozens more have been injured and, hours after the blaze erupted, firefighters were still attempting to extinguish the towering flames.

Rescue teams have begun conducting desperate search efforts to locate and free survivors that are expected to be trapped under the scorched remains of the building.

Reports from the scene suggest witnesses have already observed several injured survivors being pulled from the rubble. 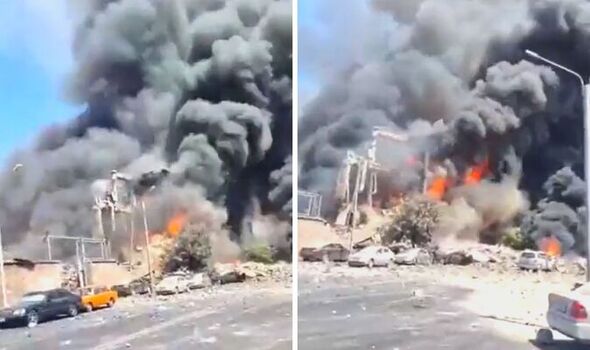 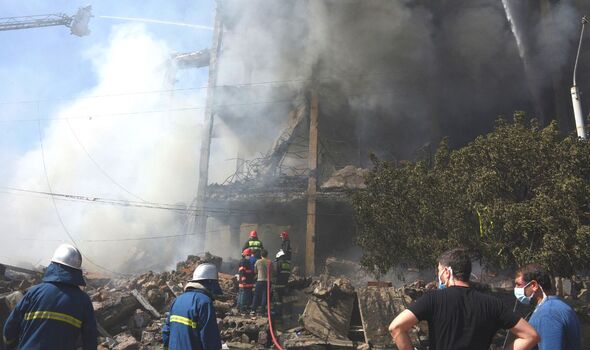 The blast occured at the Surmalu market, a large and popular shopping location around two kilometres from the city centre.

The fire is reported to have originated from a fireworks storage area close to the market, before a series of explosions tore through the surrounding area.

The exact cause of the blaze has not yet been officially confirmed and there is no immediate understanding of what may have triggered the fireworks to ignite.

Local authorities confirmed a large presence of emergency services had attended the scene to control the fire and treat victims at the site. 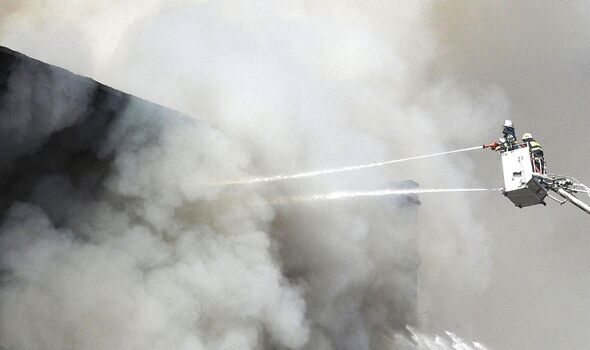 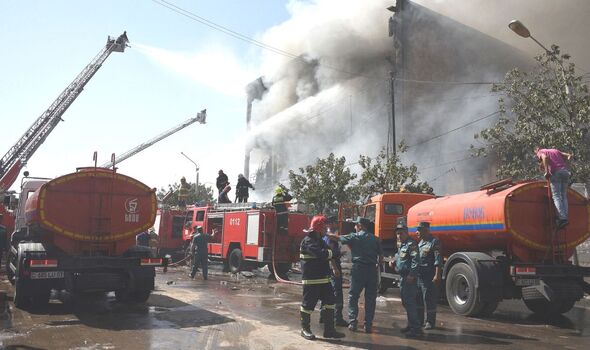 Aik Kostanyan, a spokesman for the Ministry of Emergency Situations, confirmed the casualty toll stood at one person killed and an additional 36 injured.

The figure has not yet been finalised as emergency services continue to shift the twisted metal and concrete torn apart by the explosion in search of people remaining under the rubble.

The Health Ministry said 26 people had been taken to hospital to receive treatment for injuries relating to the incident.

The severity of the injuries was not immediately clear although 11 of the 26 people transferred for hospital treatment are reported to be minors. 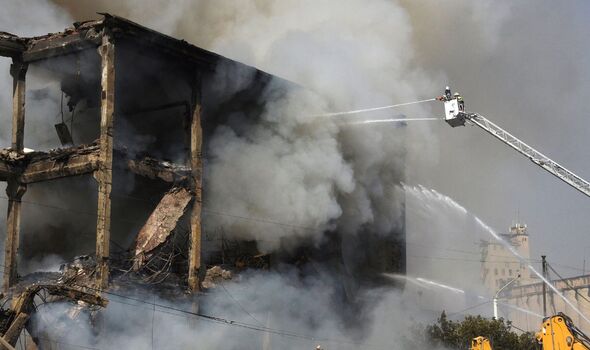 Emergency services at the scene were assisted by volunteers in civilian clothes as the urgent search for survivors ensued.

An Associated Press (AP) reporter at the scene witnessed two people being pulled from the remains of the market – a woman with an injured leg and a man who appeared unconscious were freed by rescuers.

Minister for Emergency Situations Armen Pambukhchyan said two sisters had been pulled alive from the rubble.

Read next:
Smoke billows over Gatwick Airport runway as huge wildfire breaks out
UK wildfires MAPPED: These areas are most prone to blazes
Russia heats up as Ukraine war conscripts see barracks destroyed
Lukashenko reeling as Belarus forced to break silence on explosions
‘Why did it come to this?’ Thornton Heath residents erupt at explosion