Methane, the powerful, invisible greenhouse gas, has been leaking from oil facilities since the first wells were drilled more than 150 years ago. Most of that time, it was very difficult for operators to measure any emissions accurately — and they had little motivation to, since regulations are typically weak.

Now, technology is catching up just as there is growing alarm about methane’s role driving global warming. A Canadian company, GHGSat, last month used satellites to detect what it has called the smallest methane leak seen from space and has begun selling data to emitters interested in pinpointing leaks that previously were harder to spot.

“The discovery and quantification of gas leaks from space is a game-changer in the interaction of atmospheric sciences and climate change mitigation,” said Thomas Roeckmann, professor of atmospheric physics and chemistry at Utrecht University in the Netherlands and coordinator of a project, called MEMO2, to measure methane leaks at ground level. “We will likely be able to detect smaller and thus potentially many more leaks from space in the near future.”

Soon the company may have competition. Bluefield Technologies, based in New York City, plans a group of satellites for launch in 2023 that promises an even finer resolution. And the Environmental Defense Fund hopes to launch MethaneSAT in the next couple of years, which is designed to pick up small perturbations in methane across large areas.

Until a few years ago, measuring methane from small areas such as a fracking well required ground-based sensors. They were good at determining gas concentrations at a site, but considering the millions of oil-and-gas facilities worldwide and the high cost of checking and rechecking, finding leaks could be time consuming and complicated, even with the use of airplanes and drones. In 2002, satellites from Japan and the European Space Agency began taking stock of global emissions, but the resolution was too low to identify point sources.

“Aircraft are very expensive” for methane monitoring, so “it’s not something that happens on a daily basis,” said Wes Jickling, the chief executive of Canada’s Oil Sands Innovation Alliance, a GHGSat customer and partnership of nine companies including BP and an Exxon Mobil subsidiary. And restrictions on drones limit their utility. “What you get from satellites is constant monitoring,” he said.

GHGSat, which is based in Montreal, uses a two-satellite method to pinpoint unknown leaks. First, a much less sensitive satellite identifies a general area where methane concentrations seem to be rising.

Then, one of two newer satellites, known as Claire and Iris, are sent to look more closely. 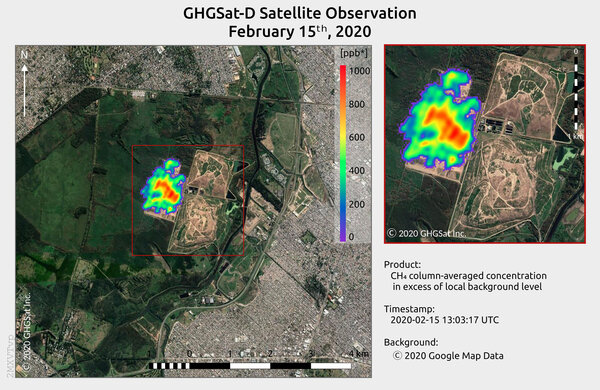 Iris was just launched a few months ago, and the small emission it detected in October was a test leak, designed to demonstrate that the product actually worked. “Several purchase orders were contingent on the initial demonstration of performance of Iris,” said Stéphane Germain, GHGSat’s chief executive.

Of the climate-warming gases humans produce, few have been as vexing as methane.

Besides production of fossil fuels including coal, methane also comes from landfills and agriculture, including livestock and rice farms. Natural sources such as wetlands produce around 40 percent of the worldwide emissions.

Methane is less prevalent in the atmosphere than carbon dioxide, but it is far more potent at trapping the sun’s heat, and it has increasingly become a target of concern for meeting the greenhouse-gas reduction goals of the Paris Agreement, the 2015 pact between the nations of the world to curb emissions to fight warming.

“We do not know what the really large emitters are amongst the many coal mines and millions of oil and gas facilities,” said Ilse Aben, a co-principal investigator with the earth science group at the Netherlands Institute for Space Research, which provides data from the older satellite that plays a role in GHGSat’s discoveries. But now “you can really see where the methane is coming from — even what part of which facility.”

Since methane dissipates in the atmosphere more quickly than carbon dioxide, reducing methane emissions brings climate benefits much more rapidly. Yet while it has doubled in atmospheric concentration over the past 70 years, precisely where all this additional methane is coming from has not been well understood.

Given the fact that oil and gas operations are known to leak methane, and the increase in methane in the atmosphere has occurred concurrently with the boom in drilling, they seemed a natural place to look. Sure enough, methane emissions from oil and gas operations have consistently been found, in research over the past several years, to be far higher than the industry and the Environmental Protection Agency were estimating.

And much of it was coming from leaks. One 2016 Stanford paper found that just 5 percent of leaks produce around half the leakage.

That’s both a risk and an opportunity for energy companies.

A risk because regulators, lawmakers and financiers are getting increasingly serious about limiting emissions: This month, the United Kingdom required large companies and banks to disclose their climate risks by 2025. And more than 100 major banks have placed restrictions on their fossil fuel investments.

“Technology is delivering a way of bringing independent checks on environmental performance, which is now clearly a source of financial risk,” said Charles Donovan, executive director of the Centre for Climate Finance and Investment at Imperial College Business School in London.

Detecting and sealing leaks is an opportunity because much of what is recovered could be sold to produce energy, since methane is the primary component of natural gas. However, gas prices are extremely low right now, which is a major economic disincentive to patch leaks.

Despite that, the satellites will still be able to spot emissions from space, Ms. Aben said, enabling observers to say to the owners of leaking sites. “We’re seeing this, and what are you going to do about it?”

Shell said in 2018 it would begin to tie executive compensation to methane emissions reduction, and a year later entered into an agreement with GHGSat. “There’s real pressure now from investors, who are looking at how well their portfolios are aligned with Paris targets, or simply concerned about risks associated with climate change,” said Mr. Donovan.

Greenhouse-gas-detecting satellites work by measuring sunlight reflected from Earth onto an instrument called a spectrometer. Different gases absorb light at different characteristic frequencies, so by seeing how much light of particular wavelengths reach the instrument (after adjusting for the complexities of cloud cover and other things) operators can see how much methane or other gas there is over a particular landscape. Factoring in wind speed and direction, alongside topography, helps track the gas to a source.

Last year GHGSat spotted, by accident, a gas cloud in Turkmenistan so large that it rivaled the 2015 SoCalGas blowout in Southern California for the distinction of the biggest known methane leak.

Since then, GHGSat has been working with scientists at the Netherlands space research institute, which helped develop a wide-angle satellite spectrometer called Tropomi. “Every couple of weeks, they give us a list of hot spots they found, and then we go take a look” with finer resolution, Mr. Germain said.

“If they turn out to be industrial sources, we work to find the operators and let them know — and if they’re not already customers, hopefully turn them into customers,” he said.

Satellites have been measuring methane in the atmosphere since the European Space Agency launched Envisat in 2002, though the goal of this and other satellites was to work out global emissions levels, not pinpoint specific leaks. Japan followed with GOSAT in 2009, and the ESA’s Tropomi went into operation in 2017. (Republicans in Congress scrapped a NASA mission in 2005.)

When Europe initiated its cap-and-trade program to limit greenhouse gases by forcing emitters over a certain threshold to pay for their excess output, Mr. Germain said he realized there would be a financial incentive for companies to find and reduce their emissions. His company patented an instrument that could map emissions to a much finer resolution than the publicly-funded satellites were capable of seeing. However, because it is zoomed in so closely, it’s impractical to use it to scan the whole world.

Since the Turkmenistan find, the Netherlands space institute and GHGSat have collaborated to find large emissions from coal mines in China and Australia, as well as from other oil-and-gas facilities in Central Asia. Ms. Aben said that, with the new orbiter, “we will see quite a bit more.”