Allies of President Duterte refused to renew station’s 25-year licence following his tirades against the company. 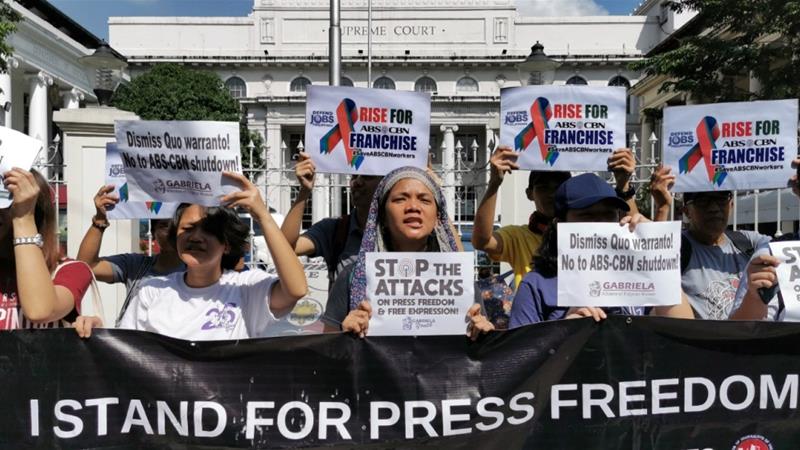 ABS-CBN, the Philippines’ largest television network, has been ordered to cease operations after President Rodrigo Duterte’s allies in Congress refused to renew the station’s 25-year licence.

In an order issued on Tuesday, the government agency tasked with awarding broadcasting licences said “absent a valid Congressional Franchise, as required by law”, the network should stop its various television and radio operations.

The National Telecommunications Commission (NTC) said ABS-CBN’s license expired on May 4 and gave the station 10 days to respond.

In a statement, which was first read on-air over DZMM, the ABS-CBN management said that it will abide by the order and will stop operation by the end of Tuesday.

After ABS-CBN files its response within the next 10 days, a hearing will be scheduled as soon as the coronavirus emergency lockdown in Metro Manila and other areas of the country is lifted.

On Sunday, Duterte’s Solicitor-General Jose Calida issued a statement warning the NTC of prosecution if it did not carry out the closure order.

Calida, the top government lawyer, said there was no legal basis to give the company even a provisional licence as it awaited approval from Congress, which resumed its session on Monday after a recess.

Brazen clampdown of the freedom of the press

In a speech at the House of Representatives on Tuesday, Congress member Arlene Brosas denounced the order as a “brazen clampdown of the freedom of the press.”

Danilo Arao, journalism professor at the University of the Philippines, said that NTC’s decision reflects that limits of its independence as a government body under the office of the president.

Calida, the solicitor-general, maintained that the NTC has no power to issue any such licence to ABS-CBN, citing provisions in the Philippine Constitution which, he said, gave Congress “exclusive powers”.

“Although this legislative power may be delegated to administrative agencies through a law, at present, there is no such law giving the NTC or any other agency the power to grant franchises to broadcasting entities.”

A 2003 Philippine Supreme Court decision also ruled that the NTC could not issue a provisional permit without the legislature’s backing.

In a statement on Tuesday, the National Union of Journalists of the Philippines denounced the “dastardly move” of the Duterte administration.

“All this stems from President Rodrigo Duterte’s personal vendetta against the network, whose franchise renewal he pledged to block.

“It sends a clear message: What Duterte wants, Duterte gets. And it is clear, with this brazen move to shut down ABS-CBN, that he intends to silence the critical media and intimidate everyone else into submission.”