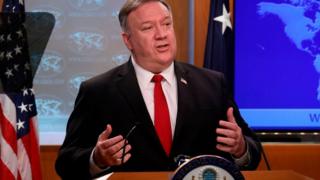 Secretary of State Mike Pompeo has denied seeking to oust the State department’s independent watchdog in ‘retaliation’ for an investigation.

He had been investigating Mr Pompeo’s alleged used government staff for personal errands, US media reported.

It emerged on Monday he was also scrutinising a Trump administration Saudi arms deal.

He is the fourth Inspector General to be fired by Mr Trump in four weeks, and the move on Friday sparked outcry from Democrats, who claimed Mr Linick was fired for political reasons.

Mr Pompeo confirmed that he recommended Mr Linick’s removal, but said he did not know that the inspector general was investigating him.

“I’m not briefed on it. I usually see these investigations in final draft form 24 hours, 48 hours before the IG is prepared to release them,” he told the Washington Post on Monday.

“So it’s simply not possible for this to be an act of retaliation. End of story.”

The Secretary of State said Mr Linick was sacked for “undermining” the State department, though he did not give further details.

“I went to the president and made clear to him that Inspector General Linick wasn’t performing a function in a way that we had tried to get him to, that was additive for the State department, very consistent with what the statute says he’s supposed to be doing,” he said.

Mr Linick, a former prosecutor, was appointed by Mr Trump’s predecessor, Barack Obama, to oversee spending and detect mismanagement at the state department.

Democrats say Mr Trump is retaliating against public servants who want to hold his administration to account.

On Friday, Mr Trump said he no longer had the “fullest confidence” in Mr Linick and he would be terminated in 30 days.

Mr Linick was said to be investigating complaints that Mr Pompeo had improperly used tax-payer provided staff for personal tasks, such as picking up dry cleaning and walking his dog.

Eliot Engel, the Democratic chairman of the House Foreign Affairs committee said over the weekend that he believed Mr Linick’s sacking was an act of “retaliation” and that he would open an investigation.

“It is not possible that this decision, or my recommendation rather, to the president rather, was based on any effort to retaliate for any investigation that was going on, or is currently going on,” he told the Post.

Mr Trump dismissed the investigation as unimportant. “I don’t know anything about the investigation but you’re just telling me about walking a dog,” he said. “It’s terrible. It’s so stupid. You know how stupid that sounds to the world? Unbelievable.”

On Monday, Mr Engel said he suspected “another reason for Mr Linick’s firing”.

“His office was investigating – at my request – Trump’s phony declaration of an emergency so he could send weapons to Saudi Arabia,” Mr Engel said in a statement.

“We don’t have the full picture yet, but it’s troubling that Secretary Pompeo wanted Mr Linick pushed out before this work could be completed.”

Last May, Mr Trump angered both Republicans and Democrats when he declared a national emergency to sidestep a congressional review of over $7bn in arms sales to Saudi Arabia.

The rarely used loophole in the Arms Export Control Act was invoked by Mr Trump to approve the sale to Saudi Arabia, Jordan and and the UAE – over the objection of US lawmakers.

In a statement at the time, Mr Pompeo said “an emergency exists which requires the immediate sale” of the weapons “in order to deter further the malign influence of the government of Iran throughout the Middle East region.”

He said the arms shipments “must occur as quickly as possible in order to deter further Iranian adventurism in the Gulf and throughout the Middle East.”

Human rights groups have found instances when US-made weapons have been used by Saudi Arabia to kill civilians in neighbouring Yemen during that country’s civil war.

This is the latest in a series of dismissals of independent government watchdogs.