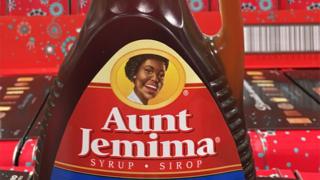 US company Quaker Oats has announced it will rename its Aunt Jemima line of syrups and foods, acknowledging the brand was based on a racial stereotype.

For over 130 years, the brand’s logo has featured a black woman named after a character from minstrel shows in the 1800s that mocked African-Americans.

Quaker said past branding updates to address these issues were “not enough”.

Criticism against the brand has renewed amid the national debate over racism sparked by George Floyd’s death.

“We also must take a hard look at our portfolio of brands and ensure they reflect our values and meet our consumers’ expectations,” Ms Kroepfl said, adding that Aunt Jemima’s origins are “based on a racial stereotype”.

“We are starting by removing the image and changing the name.”

The company has not offered further details on the coming changes, which were first reported by NBC News.

In addition, Aunt Jemima is to donate at least $5m (£3.9m) over the next five years to support the African American community, according to parent company PepsiCo.

The branding on Aunt Jemima’s syrups, mixes and other food products features an image of a black woman that has often been linked to stereotypes around slavery.

Prof Richardson said the brand perpetuated the idea of a “mammy” character – a submissive black woman who nurtured her white master’s children.

Founded in 1889, the Aunt Jemima logo was based on storyteller, cook and missionary Nancy Green, the company’s site says. Ms Green was born into slavery in Kentucky in 1834, according to the African American Registry non-profit database.

Aunt Jemima joins a number of companies offering change in light of the global protests and renewed debate over racism in America, sparked by the recent police killings of George Floyd and other African Americans.

Twitter, Nike and Disney are among the other corporations to weigh in on the issue in recent weeks.