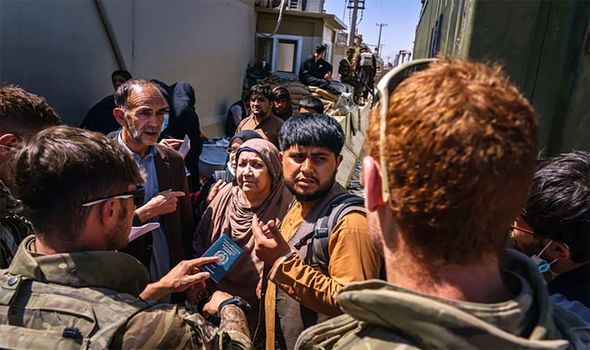 The Foreign Secretary signalled the airlift from Afghanistan had reached the final phase, with “almost all” single-nationality Britons now home.

But he would not confirm reports the evacuation will end by this weekend to give UK troops and officials enough time to pack and leave before the Taliban’s deadline next Tuesday.

Mr Raab said 2,000 passengers had been flown back to the UK in the last 24 hours, with the evacuation “operating at full speed, at full capacity”.

He declared: “We will use every last remaining hour and day to get everyone we can back, the British nationals, the Afghans who worked so loyally for us.”

The Operation Pitting airlift has flown 11,474 Afghan and British nationals from the capital Kabul since the mission began on August 13. Nearly 7,000 Afghan individuals and their families have also been evacuated.

Military commanders were yesterday “firming up” their exit plan after US President Joe Biden ruled out any attempt to stretch the deadline.

Mr Raab said UK troops had done an “amazing job” and the “lion’s share” of single-nationality UK citizens with documentation who wanted to leave had been brought home.

He said: “What remains are rather complex cases, large family units where one or other may be documented or may be clearly a national, but it’s not clear whether the rest of them are.”

Military planners are now working out how much time they need to get their own staff out of Afghanistan.

Pressed on reports the UK troop withdrawal could begin within 24 to 48 hours,

Mr Raab said: “I’m not going to give the precise timeline. What we do know is that we are working towards the end of the month. What’s really important is we will make the maximum use of all the time we have left.”

Mr Raab admitted he did not know how many people eligible to fly to the UK would be left behind once British troops withdraw by August 31. He said it depended on the “window” left in terms of timing and how many can be processed over the next few days.

He would not say whether UK troops would return to Afghanistan in the future. He said: “The United Kingdom retains the right to exercise self-defence in relation to our nationals in our country.We’re not getting into speculating about that.”

Mr Raab admitted trust in the Taliban was at “rock bottom” but said: “They have, so far, in relation to the airport, behaved constructively and engaged constructively, more or less. Some of the people on the ground – roadblocks or elsewhere – are not following what the political leadership are requiring.

“But overall, one of the reasons that we have been able to get the numbers out is because we have engaged and they have lived up to some of the things that they have said. We need to then set further tests for them and be very clear about what we are willing to do if, and only if, they live up to their assurances.”

Meanwhile, Royal Army Medical Corps troops have been caring for children separated from their parents at the Role 2 hospital based at Hamid Karzai airport.

Trauma and orthopaedic surgeon Lieutenant Colonel Benjamin Caesar helped a baby girl who was reunited with her mother before being evacuated.

He said: “As a recent father of a 14-month-old, I have a little bit more experience dealing with small children.

“We took her for a walk, managed to burp her a few times, she seemed to settle. She then sat with me.”

The officer added: “We never really know what’s going to come through the door. We have to be prepared for every eventuality.”