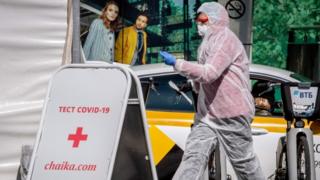 Russia has recorded 10,633 new coronavirus infections in the past 24 hours, the highest daily rise since the outbreak began in the country.

The increase brings Russia’s total number of coronavirus cases to 134,686, the seventh highest tally in the world.

But Russia’s mortality rate remains low relative to other countries, such as the US, Italy and Spain.

On Sunday, a further 58 coronavirus-related deaths were announced, bringing the total to 1,280 in Russia.

Moscow has been hit particularly hard by the virus, leaving its healthcare system struggling to cope.

Moscow’s mayor Sergei Sobyanin on Saturday cautioned against complacency, saying the capital was not past the peak of its coronavirus epidemic.

A strict lockdown has been imposed in Moscow, where its 12 million residents have been ordered to stay at home with few exceptions.

Russian President Vladimir Putin has said situation remains “very serious”, warning Russians to brace for a “gruelling phase of the pandemic” in the weeks ahead.

Earlier in the week Russian Prime Minister, Mikhail Mishustin, confirmed he had been diagnosed with Covid-19, the first senior minister in the country to do so.

Mr Mishustin, who was appointed as PM in January, was still being treated in hospital on Sunday. His spokesman said he was feeling fine, enabling him to work from hospital.

On Friday, Russia’s housing minister, Vladimir Yakushev, became the second senior minister to be confirmed to have Covid-19.

The number of confirmed coronavirus cases here is rising steadily each day. The Russian authorities put that down to a big increase in testing – over 40,000 people a day, in Moscow alone.

They also say up to half of the new cases are people without symptoms – including those detected through screening, like healthcare workers.

Still, the virus is spreading more quickly now in Russia’s regions – where hospital facilities are far worse than in the capital and where medics have been complaining they don’t have the masks and protective clothing to keep them safe.

And even here, in Moscow, some 1,700 people are being admitted to hospital each day, increasing the strain on the system.

President Putin has extended a nationwide non-working period until 11 May, saying “the peak is not behind us”.

Beyond that, the president said his government will consider gradually lifting coronavirus restrictions from 12 May, depending on the region.

Last week, Mr Putin admitted there was a shortage of protective kit for medics on the frontline of the coronavirus crisis.