After a three-year push by the Trump administration to open the Arctic National Wildlife Refuge in Alaska to oil drilling — an effort that culminated in a rush to sell leases before the White House changes hands — in the end the only taker may be the state of Alaska itself.

With a Thursday deadline for submitting bids for 10-year leases on tracts covering more than one million acres of the refuge, there is little indication that oil companies are interested in buying the rights to drill under difficult conditions, to extract more costly fossil fuels for a world that increasingly is seeking to wean itself off them.

Amid the uncertainty, a state-owned economic development corporation voted last week to authorize bidding up to $20 million for some of the leases. “It’s an extraordinary opportunity,” Frank Murkowski, an elder statesman of Alaska politics, told the board of the corporation, the Alaska Industrial Development and Export Authority, at a meeting before the vote.

There are legal questions surrounding the action, including whether the development authority qualifies as a bidder. And environmental organizations, some Alaska Native groups and others are seeking an injunction in Federal District Court to halt the lease sales outright, arguing that they are part of a deeply flawed process by the Interior Department that, among other things, played down scientific findings about possible damage to the refuge.

But if the development authority proceeds, it sets up the possibility that when the sealed bids are opened on Jan. 6, the state may find itself the sole owner of leases. That would leave it to hope that, at some point over the next decade, interest in drilling in the refuge picks up and it can sublease tracts to someone else.

The sale outcome would also be a strange end to the Trump administration’s push to allow drilling in the refuge, which is thought to overlie billions of barrels of oil, although that thinking is largely based on decades-old data. President Trump has said that opening the refuge to oil companies was among the most significant of his efforts to expand domestic oil production.

Roughly the size of South Carolina, the refuge is one of the last great expanses of virtually untouched land in the United States, home to wandering caribou, polar bears and migrating waterfowl. Alaskan officials and many Republican lawmakers have long sought to allow drilling there, citing the jobs and revenue it would create. But the refuge was protected for decades, largely by Democrats in Congress.

That changed in 2017 when Republicans, in control of both houses of Congress, pushed through a tax bill allowing sales of leases of up to 1.5 million acres of the refuge along the coast. Following an environmental review, the Interior Department this summer approved a sale, plans for which were accelerated following Mr. Trump’s election defeat. President-elect Joseph R. Biden Jr. is opposed to drilling in the refuge.

This month, the Bureau of Land Management, the Interior Department agency handling the sales, removed about a half-million acres from the bidding, citing concerns about disrupting caribou calving areas and disturbing other wildlife. That leaves about a million acres available across 22 tracts, with a minimum bid of $25 an acre. 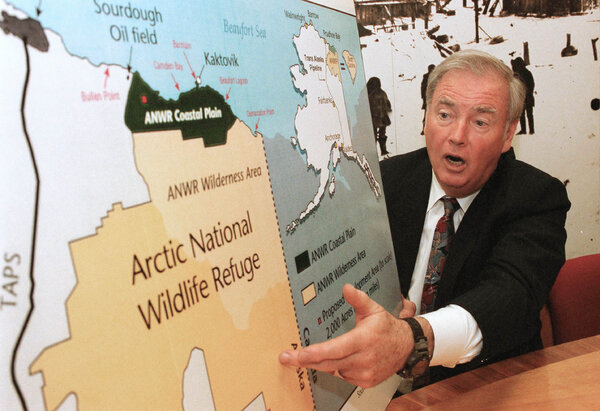 With just a few days before the deadline, Lesli Ellis-Wouters, a spokeswoman in Alaska for the bureau, declined to say whether any bids had been received. “That information is considered confidential until bids are opened,” she said.

The Alaska Oil and Gas Association, a trade group, has long said that companies avoid tipping their hand about their plans.

Pavel Molchanov, an energy analyst with the financial services firm Raymond James, said companies were highly unlikely to bid, given the cost of exploring and drilling for oil in the Arctic, the potential damage to their reputations from operating on lands prized by environmentalists, the growing movement among major banks to refuse to finance drilling in the refuge, and the depressed state of the industry amid the coronavirus pandemic.

“Drilling in the refuge is just about the last thing that any oil companies want to do right now,” Mr. Molchanov said. “But even pre-Covid, industry appetite for this would have been sparse.”

In an opinion article in the Anchorage Daily News before the economic development authority meeting, Mr. Murkowski, a former governor and United States senator and the father of one of the state’s current senators, Lisa Murkowski, acknowledged widespread concerns that there would be no bidders for the leases. “After all our efforts, hope and aspirations, Alaska will look like the proverbial paper tiger,” he wrote.

Mr. Murkowski said by bidding, the state would serve as a backstop, and he argued that Alaska had expertise when it comes to oil leasing, although that expertise is in selling leases on state-owned land, not buying leases on federal land.

He also pointed out that because leasing revenue is split equally between the federal and state governments, if its bids were successful the state would be getting a unique deal. “You’re going to get half your money back,” he told the authority’s board. Only the state, he added, “can buy at a 50 percent discount.”

Mr. Murkowski was one of only a handful of speakers in support of the plan. Most commenters said that the refuge should be left alone and that the state should spend its money elsewhere, such as for Covid relief.

Suzanne Bostrom, a staff attorney with Trustees for Alaska, a nonprofit public-interest law firm that is representing the groups trying to block the sales, said the authority’s move to authorize bids “smacks of real desperation.”

She said there were “very serious questions” about whether the authority could “spend state resources with no oversight.”

“The legislature is supposed to make those types of decisions,” she said.

Should the court allow the lease sale to proceed, the incoming Biden administration is expected to seek to reject them. Questions about the legality of state ownership might offer another avenue for the new leadership to do so.

In the tax bill, the sales were presented as a way to raise $900 million over 10 years for the federal treasury to help offset more than a trillion dollars in tax cuts. But that figure has long been questioned by outside experts. An analysis last year by The New York Times suggested the actual amount would be about $45 million.

And with the sales looming, any potential financial windfall for the government is looking even smaller, said Autumn Hanna, vice president of Taxpayers for Common Sense, a nonpartisan organization in Washington, D.C.

“We still strongly feel that the lease sales are going to fall dramatically short for taxpayers,” Ms. Hanna said. “We don’t think there’s any evidence of industry interest, and that there could be any real competitive bidding.”

The group said its most recent estimate showed that the federal treasury could receive as little as $15 million from the lease sales.