North England residents in Durham have been forced to shovel away snow following a heavy downpour. The Met Office issued amber snow weather warnings as wintry conditions are set to continue across northern England and parts of Scotland. Cars and entire streets have been covered in snow resulting in significant travel difficulties for the regions in northern England.

Temperatures are also expected to drop as we head into the weekend creating icy conditions for many impacted by the heavy snowfall.

BBC Weather’s Sarah Keith-Lucas explained the wintry conditions and the warning in place.

She said: “The Met Office have issued an Amber weather warning for heavy snow across some parts of northern England and Scotland.

“It will be mainly over the high ground but there will be some snow even down to low levels. 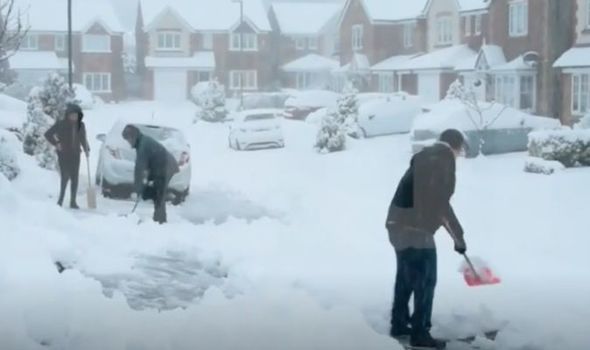 “Over the high ground 10-20cm of snow and at some levels away from the coast you will see a couple of centimetres of snow falling.

“That is likely to cause some disruption through the course of the day where you are seeing the sleet and the snow.

“It is all down to this slow-moving frontal system that has been with us for the past 24 hours and it is quite slow-moving today.”

The amber warning is expected to impact parts of Central, Tayside and Fife; Grampian; Highlands and Eilean Siar; SW Scotland, Lothian Borders; and Strathclyde in Scotland.

In North East England, the amber warning affects places such as Durham, Gateshead, Newcastle upon Tyne and Northumberland.

“Rain will turn to snow across Scotland on Wednesday afternoon and evening, initially on high ground, but increasingly to lower levels.

“During Wednesday evening and night the risk of snow will extend southwards into more of northern England.

“10 to 20cm snow is likely to accumulate above 200 metres with greater amounts at higher elevations.

“Amounts at low levels (below 100 metres) are less certain, but 5 to 10cm is likely in some places by Thursday morning.”

Areas that have experienced heavy snow can also expect temperatures to drop further over the next 24 hours.