Adults allowed for first time in weeks to go for a walk and do sport as gov’t lifts coronavirus ban on outdoor exercise. 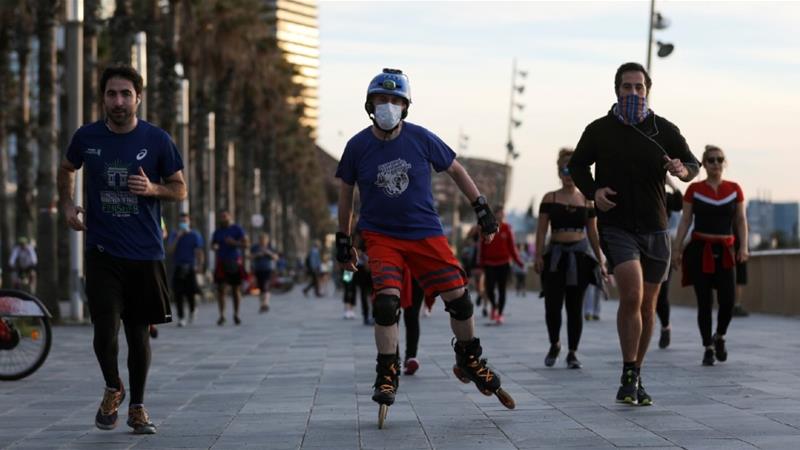 For the first time in almost 50 days, people in Spain have been allowed to leave their homes for outdoor exercise as the government eased its coronavirus-related lockdown, one of the world’s strictest.

Spain’s nearly 47 million people have, since March 14, lived under the drastic containment measures, with adults authorised to leave home only to buy food, medicine or to walk the dog.

Despite the lockdown being prolonged until May 9, Prime Minister Pedro Sanchez on Tuesday unveiled a plan to gradually begin easing the restrictions in four phases that should be completed by the end of June.

As part of the plan, children below the age of 14 were allowed last week to step outside for one hour of supervised outdoor activity.

Al Jazeera’s Marta Herrero, reporting from Madrid, said people in the capital had undergone a 48-day period dominated by feelings such as “stress, uncertainty and anxiety”.

“Some of them said they lost their job during this lockdown and so they appreciated this opportunity to go out,” Herrero reported. “Some said they were a little scared of getting close to other people because there is still a high risk of infection.”

Marcos Abeytua, a 42-year-old financial adviser who lives in the normally bustling district of Chueca in Madrid, said he got up at 7am to go for a run, something he would not normally do on a Saturday morning.

“After so many weeks in confinement, I badly wanted to go out, run, see the world,” he told AFP news agency. “Yesterday, I was like a child on Christmas Eve.”

In Barcelona, 36-year-old Cristina Palomeque said she was feeling “good, but tired”, after taking a break following a 20-minute jog.

“You sure notice that it has been a month and I am not in shape,” she told The Associated Press news agency, noting she had grown tired of following Zumba and yoga classes online.

“Some people think it may be too early [to go out], as I do, but it is also important to do exercise for health reasons,” she said.

Masks to be compulsory

To limit the risk of a resurgence, wearing face masks will become compulsory on public transport from Monday, the prime minister said on Saturday. Millions of masks are to be distributed across the country. Their use had been, until now, only “highly recommended”.

Despite the easing of the lockdown, many restrictions remained across Spain, one of the world’s worst-hit countries with more than 213,000 confirmed coronavirus cases and almost 24,000 deaths.

Before and after the elderlies’ slots, adolescents above the age of 14 and adults can leave to go for walks of less than 1km (0.6 miles) from their homes, but only two at a time from the same household.

People are also not allowed to meet others outside their own households.

Each stage of the four-phase plan will last two weeks.

Some shops, bars and churches will begin to reopen, followed by gyms, cinemas, theatres and hotels. Travel between regions will not be permitted until the end of June at the earliest.