After a week of violent and sometimes deadly clashes between Jewish settlers, the Israeli military, and Palestinians in the occupied West Bank, tensions and enmity are boiling over.

But the situation is only set to worsen, with several historically significant but politically sensitive dates forecast to add fuel to fuel the fire.

The advent of Jerusalem Day, Nakba Day, and the end of Ramadan — all taking place in the coming days — has prompted the Israeli Defense Forces (IDF) to bolster troop deployments in anticipation of further violence, The Times of Israel said.

And an upcoming Supreme Court hearing on Monday regarding the eviction of Palestinian families in East Jerusalem’s Sheikh Jarrah neighborhood threatens to exacerbate the tensions and add to the worst turmoil the region has seen in years.

Tensions have been rising during Ramadan

The Islamic month of Ramadan has been fraught with conflict in Jerusalem and the occupied West Bank. Violent clashes in the city have become a nightly occurrence during the holy period, the Associated Press reported in April.

The placement of barricades outside the Damascus Gate entrance to Jerusalem’s Old City — a  popular nightly gathering point with local Palestinians after the end of the Ramadan fast — resulted in a confrontation with Israeli police and more than 100 Palestinian injuries on April 22, Insider reported. 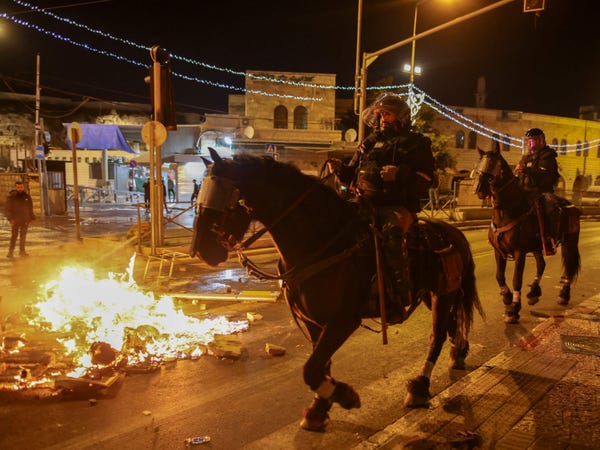 On the same night, Israeli police blocked supporters of a far-right Jewish group, Lehava, as they marched through the Jerusalem streets towards the Damascus Gate. Some of the followers of the group chanted “death to Arabs,” CNN said.

In other incidents, Palestinians filmed TikTok videos. They attacked ultra-Orthodox Jews, Jewish youths attempted to set fire to a Palestinian family’s home, and a video emerged of an Israeli motorist being beaten by a Palestinian mob before his car was set ablaze.

After the riots, Palestinian militants in Gaza shot rockets into Israel. Israel retaliated by launching strikes on Hamas targets there, Insider reported.

The chaos in the Palestinian territories coincides with increased violent attacks by Israeli settlers against Palestinian civilians.

Settler violence in the occupied West Bank has risen markedly in recent months, according to a report by the United Nations Office for the Coordination of Humanitarian Affairs (OCHA). In the first three months of 2021, the OCHA recorded more than 210 incidents of settler violence in the territory.

One of the authors of the report, Michael Lynk, the UN Special Rapporteur on the situation of human rights in the Palestinian Territory occupied since 1967, spoke to Insider about the motivations behind the attacks.

“There’s a very entrenched belief that’s probably shared by most settlers that this land is theirs that it has been historically and biblically granted to them,” Lynk told Insider. “Therefore, what they are carrying out is righteous violence in the name of both religion and nationalism.”

A week of violence – the timeline

The start of May has seen a string of violent clashes, arrests, and killings. Below is a comprehensive — but not exhaustive — list of recent events.

The IDF has already beefed up its forces in anticipation of a week fraught with conflict, The Jerusalem Post said. An additional battalion and special forces are to be deployed to the occupied West Bank, the paper reported.

“We have dates that offer some sort of warning that there might be a rise in violence,” Oded Revivi, the mayor of the Efrat settlement in the occupied West Bank, a community of Jewish settlers that is considered to be illegal under international law, told Insider.

One of these dates is Jerusalem Day, which starts on Sunday evening and lasts through Monday. It is an Israeli national holiday commemorating the capture and consequent establishment of Israeli control over the Old City in the aftermath of the 1967 Six-Day War.

The holiday observed by thousands of religious Zionists is controversial to secular Jews and many Arabs. 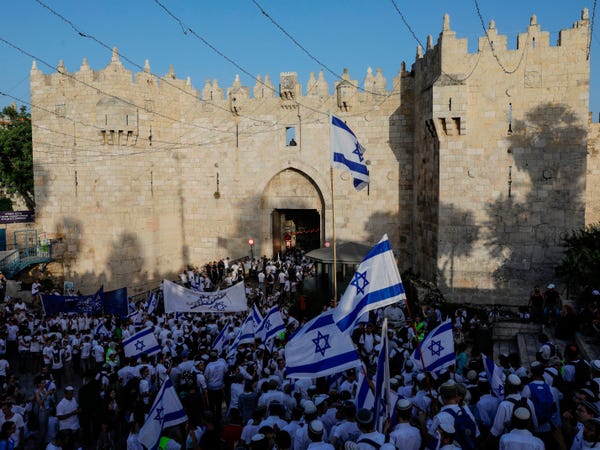 As part of the Jerusalem Day celebrations, an annual “Dance of Flags” parade sees participants walk through the Old City while waving Israeli flags.

This year, taking into account the rising tensions, Jerusalem’s police chief has asked for the parade to be re-routed to avoid passing through the Muslim quarter of the city.

“The passage of the parade in these two sensitive areas in the last week of Ramadan fasting, when all warnings relate to a possible flare-up due to events related to Jerusalem would be irresponsible and could claim human lives,” Israel Police’s Jerusalem District Chief Doron Turgeman told The Jerusalem Post.

It could incite a “violent outbreak” in other parts of the occupied West Bank and the Gaza Strip, Turgeman added.

Jerusalem Day also happens to fall on the same date as a highly-anticipated verdict by Israel’s Supreme Court on a toxic property dispute between Jews and Arabs.

The Supreme Court will decide on upholding a ruling that would see several Palestinian families in the East Jerusalem neighborhood of Sheikh Jarrah, known in Hebrew as Shimon Hatzadik, evicted from their homes in favor of right-wing Jewish settlers that assert a historic claim to the land.

The upcoming ruling has been a flashpoint for nightly protests and violence.

On Thursday, Palestinians and Israeli settlers hurled rocks at each other in Sheikh Jarrah before Israeli police separated them, AP said.

But Amit Gilutz, a spokesperson for the Jerusalem-based human rights organization B’Tselem, told Insider that the situation in Sheikh Jarrah is just one example of the mistreatment of Palestinians.

“Settler violence rampaging all over the West Bank, a racist parade marching through Jerusalem’s Old City, and the Supreme Court granting permission to expel more Palestinian families from their homes and hand the property to settlers; all these take place with the backing and encouragement of the state,” Gilutz said.

Tensions relating to the upcoming Sheikh Jarrah verdict have also prompted threats from the leader of a Palestinian terrorist group — the Izz ad-Din al-Qassam Brigades. “This is our final warning,” Mohamed Deif, the head of Hamas’ military wing, said on Wednesday. “We will not stand idly by, and the occupation will pay a heavy price.”

Ohad Zemet, a spokesperson for the Embassy of Israel in London, has accused Hamas and the Palestinian Authority of politicizing the upcoming legal decision for personal gain.

“The Israeli judicial system is independent and will reach a just legal conclusion based on the law and the facts. It is unfortunate that the Palestinian Authority and the Hamas terrorist organization try to use this case for their own political purposes and in a bid to incite violence,” said Zemet.

On Friday night around 200 Palestinian worshippers were injured after clashing with Israeli police at the al-Aqsa mosque, Insider’s Kelsey Vlamis and Sarah Al-Arshani reported. Several Israeli police officers were also hurt in the clashes, according to the BBC.

Thousands of Muslims had gathered at the holy site to observe the last Friday of Ramadan. Israeli police say the clashes begun after worshippers threw rocks, according to CNN. Videos of the event show people running as Israeli forces shot rubber bullets and stun grenades.

Over 90,000 Muslim worshippers prayed at the Al-Aqsa Mosque to mark the holy night of Laylat al-Qadr on Saturday, Reuters said. 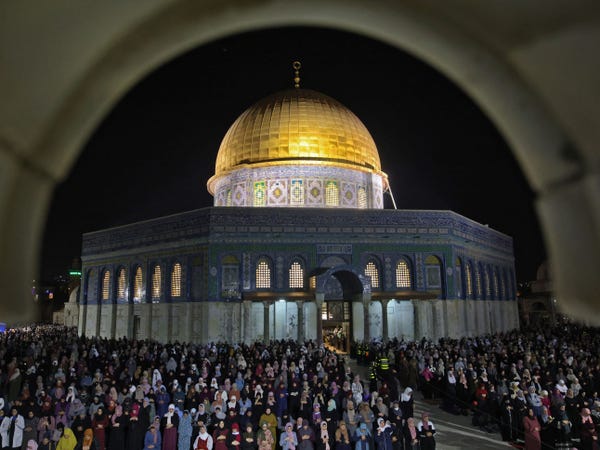 These dates may play a part in further violence

In addition to the Sheikh Jarrah verdict and Jerusalem day, two other dates could provide the backdrop to more violence.

Nakba Day, which takes place next Saturday, is an annual Palestinian commemoration of the Nakba, or the so-called “Palestinian catastrophe.”  It mourns the creation of the State of Israel in 1948, and, in the past, the day has been marked by bloodshed.

In 2011, protesters attempted to breach Israel’s borders from the occupied Palestinian Territories, Lebanon, Syria, Egypt, and Jordan. At least 12 Palestinians were killed and hundreds wounded due to shootings by the Israeli Army, AFP reported.

Eid al-Fitr is the feast marking the end of the Muslim holy month of Ramadan on Wednesday.

Israel’s Police Commissioner Kobi Shabtaiheld has order commanders in the Jerusalem area to “significantly” boost their forces ahead of the Ramadan celebrations, The Times of Israel said.

The international community is appealing for de-escalation

The international community has appealed for an end to the violence.

A US State Department spokeswoman told reporters that Washington was “deeply concerned about the heightened tension.”

The EU followed suit, with a spokesperson calling on authorities to “act urgently to de-escalate the current tensions” in Jerusalem. “Violence and incitement are unacceptable and the perpetrators on all sides must be held accountable,” the EU spokesperson said in a statement.

The UN’s rights office has urged Israel to call off the evictions in Sheikh Jarrah, Al Jazeera reported.

But according to Lynk, the UN’S Special Rapporteur, these types of statements aren’t enough. “I’ve called for the international community to speak louder and more forcefully,” he said.