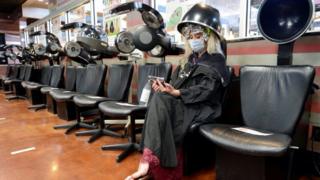 Three US states have allowed some shops to reopen after measures imposed to curb the spread of the coronavirus, as the country’s death toll passed 51,000.

Salons and spas could reopen in Georgia and Oklahoma while Alaska lifted restrictions on restaurants.

On Friday, President Donald Trump walked out of a shorter than usual briefing, refusing to take questions.

He has faced criticism after suggesting that injecting household disinfectant into patients could be beneficial.

His remarks have been condemned as dangerous by doctors and manufacturers. Disinfectants are hazardous substances and can be poisonous if ingested, and even external exposure can be dangerous to the skin, eyes and respiratory system.

Mr Trump said on Friday that the comments – made at a news conference one day earlier – were sarcastic and taken out of context. 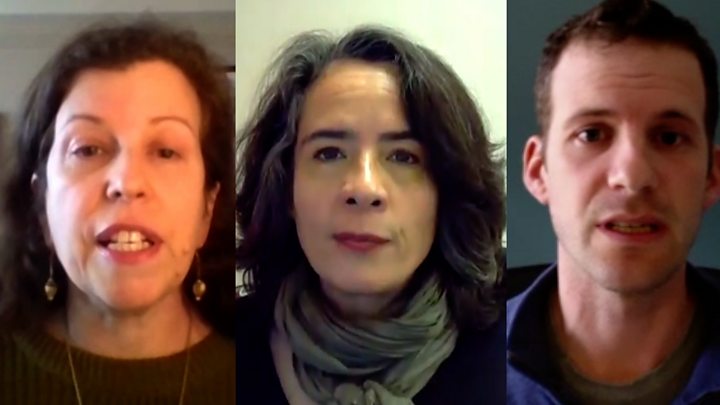 What is happening in the three states?

Customers visiting the newly reopened businesses in Georgia, Oklahoma and Alaska will be expected to continue adhering to social distancing measures. But some cities and areas have decided to keep their lockdowns in place.

With unemployment claims reaching 26 million people – or around 15% of the population – since mid-March, many US states are feeling the pressure to resume trading.

But health experts have warned that the steps might be happening too soon, amid fears they could spark another wave of infections. After being criticised by Mr Trump, Georgia Governor Brian Kemp tightened some of the sanitation and social distancing requirements for restaurants.

What else happened on Friday?

In the White House briefing that lasted just over 20 minutes, President Trump asked people to continue to follow rules around social distancing and the use of face masks.

Also on Friday, Mr Trump signed a $484bn (£391bn) economic stimulus bill into law, saying he wanted to “rush economic relief to our citizens”. It is the fourth Covid-19 relief package passed by Washington, and allocates funds towards greater testing, hospitals and a small business loan programme.

What are the US numbers?

The US has by far the highest death toll and case count in the world. But despite recording more than 890,000 cases, the US population of 330 million is much higher than other countries badly hit by the virus, such as Spain and Italy.

Recent steep rises in the daily US death toll are also partly due to the inclusion of “probable” virus deaths – on 14 April, the US Centers for Disease Control said their case counts would include both confirmed and probable cases and deaths.

A probable Covid-19 death is one that meets clinical and epidemiological criteria but has not been confirmed by testing.

It is also important to note that many mild cases remain unreported, so the death rate from confirmed cases is not the same as the disease’s overall death rate.

Testing efforts are key to tracking the actual mortality and spread of the disease. Vice-President Mike Pence, the Covid-19 taskforce leader, said the US had conducted 4.9 million tests thus far, and that the government was working with governors to expand testing.