Michael Lauber is facing allegations of misconduct in his FIFA corruption investigation. 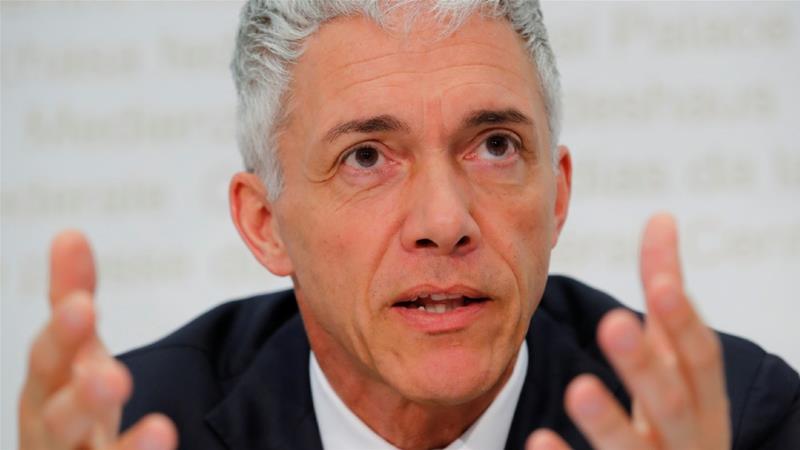 Michael Lauber could face the sack as Switzerland’s attorney-general as the Alpine nation’s parliament investigates his alleged meetings with Gianni Infantino, the chief of FIFA, football’s global governing body.

Lauber is in charge of conducting investigations into alleged corruption at FIFA, but the Swiss parliament’s judicial committee wants to know if there was any collusion between Swiss prosecutors and FIFA, which is based in Zurich.

The committee – which will question Lauber on May 20 – said it had noted a disciplinary decision taken by the supervisory authority watchdog that oversees his office on March 2 to sanction Lauber by cutting his salary.

That investigation found Lauber committed “very serious breaches” before, but also during the disciplinary proceedings, the committee said.

“These included statements contrary to the truth, violation of the duty of loyalty or obstruction of the disciplinary investigation,” it said.

Lauber appealed against that decision, accusing the watchdog of having made several procedural errors, exceeding its powers and “being biased”.

After hearing from the attorney-general, the judicial committee “then intends to decide on the possible opening of impeachment procedures against him”, it said in a statement.

FIFA has never denied the informal meetings between Infantino and Lauber in 2016 and 2017, saying they were intended to show that the federation was “ready to cooperate with the Swiss justice system”.

Switzerland has pursued a number of cases since a raid on a luxury hotel in Zurich in May 2015 led to the arrests of several FIFA executives and exposed an allegedly corrupt underbelly in world football.

In total, more than 20 FIFA proceedings have been opened in Switzerland over the past five years into allegations of corruption and vote-buying, and over the awarding of television rights contracts.

In an interview with the Swiss magazine L’Illustre published on Wednesday, the former president of the Union of European Football Associations, Michel Platini, called on Infantino to resign.

He alleged that Infantino and Lauber thought themselves “untouchable and above the law”.

Lauber has also been accused by anti-corruption campaigners of bungling a fraud trial over payments linked to the 2006 World Cup in Germany.

The case has clouded the international reputation of Switzerland’s judicial system, which is also probing high-level corruption cases linked to the Brazilian state oil firm Petrobras and the Malaysian state development fund 1MDB.