Even as the sprawling dining halls of old struggle with emptier workplaces, food is still important to employees, particularly the young. Many companies are reinventing the company meal.

Hallmark helped set the template for the huge corporate cafeteria with its Crown Room, which opened in 1956 at the company’s headquarters in Kansas City, Mo.Credit…Hallmark 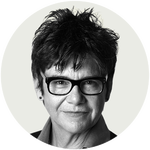 The corporate cafeteria can be an especially lonely place these days.

“You used to walk in at 12 o’clock on a Tuesday and stand in line to get something,” said Casey Allen, 46, who works for a division of the agricultural chemical company BASF in Raleigh, N.C. “Now, you walk in and you’re usually first in line.”

A paternalistic fixture of white-collar life born of the Industrial Revolution, the office dining room survived the midcentury move to sprawling suburban office parks. It weathered the rise and fall of cubicle culture and power lunches, and more recently, the lavish excess of the Silicon Valley office lunch.

But as the American office emerges from its pandemic slumber, can the cafeteria survive layoffs, a workweek that sometimes requires only a few days in the mother ship and a new, more demanding generation of employees?

Even at companies like Meta, which this month announced that it would lay off 126 cafeteria employees at its headquarters in Menlo Park, Calif., workers are skipping free meals in a quest to leave the office as soon as possible.

“The world of the traditional big cafeteria is dead,” said Fedele Bauccio, who in 1987 co-founded Bon Appétit Management Company, which runs food service at hundreds of museums, universities and companies like LinkedIn. “They are just too expensive to maintain, and not flexible enough.”

Still, office workers need to eat. So companies are blowing up the cafeteria. Long regarded as a way to encourage productivity, cafeterias are being reframed as respite and recreation, designed to attract younger workers in a job market badly in need of them.

Some companies are installing cocktail bars, or hosting sunset oyster-shucking parties to help employees relax and socialize after work. The large dining halls at tech giants are being divided into smaller, more homey spaces flexible enough to feed a work force whose size changes drastically day to day. Developers are building restaurants that function like subsidized corporate cafeterias but are open to the public.

Employees, especially younger ones, are demanding more culturally authentic meals and climate-friendly kitchen protocols, like reducing waste, according to Mr. Bauccio and others in the corporate food service business. They are eating less meat and questioning labor practices. Health and wellness have become a menu mantra.

Companies that aren’t paying attention are likely to suffer, said Jennifer A. Chatman, associate dean for academic affairs at the Haas School of Business at the University of California, Berkeley.

Smart leaders know that informal interaction can keep corporate culture from eroding as remote work persists, and may be the main purpose for coming to the office in the future, she said.

“A cafeteria is not the only way to get there,” Dr. Chatman said, “but people need to eat, and we know eating together fosters interaction.”

Food has become such an important recruitment and retention tool that some applicants for remote jobs are even offered credits with food delivery companies, or generous weekly lunch stipends — benefits that may be especially prized as inflation drives up food costs.

Free meals can also offer psychological rewards, Dr. Chatman said. “There’s an advantage to being able to say, ‘My company buys me lunch every day,’ There is a symbolic value in feeling like you are being taken care of by the company.” 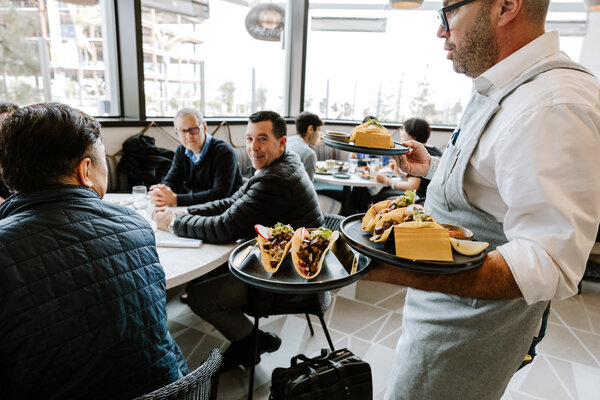 On the shores of South San Francisco, an airy two-story restaurant called the Anecdote opened in March on a biotech campus. It functions like a corporate cafe, but has the look and feel of a restaurant.

Bon Appétit Management Company pioneered the idea with real estate developers. Companies in the building can use the restaurant as a way offer employee meals, sometimes free or at a discount. But anyone can stop in for dishes like crispy tofu sliders and $16 Dungeness crab cakes.

Company downsizing and hybrid work hours prompted the idea, but cities — particularly on the West Coast — that are pushing companies to stop providing abundant free food helped it along, said Alison Harper, a Bon Appétit district manager. Huge corporate cafeterias, the reasoning goes, keep workers from patronizing local food businesses, and offer nothing for the neighborhood.

“The pandemic speeded up what I consider a paradigm shift that was already happening in the Bay Area and beyond,” she said. “Cities were saying we don’t want big, closed cafeterias that don’t benefit the community anymore.”

Hans-Peter Goertz, 48, eats at the Anecdote during the three days each week he goes to the Cytokinetics office. He misses the variety and speed of food service at his former employer, Genetech, where a dosa or an order of fresh, local fish was delivered fast and free. A meal at the Anecdote, he said, is more akin to a longer, European-style lunch.

“I can get a really nice meal for $4 or $5 in a beautiful setting with an innovative menu,” Mr. Goertz said. “It’s a very nice perk that translates beyond the economics.”

There may be no better example of the changing fortunes of corporate dining than the former Condé Nast cafeteria in Midtown Manhattan, once an exclusive palace of power where the editor Anna Wintour ordered blood-rare burgers, and one might spot Cameron Diaz at the salad bar or John Updike having lunch with a New Yorker editor. The cafeteria line became so legendary that it had a role in the film “The Devil Wears Prada.” (“You do know that cellulite is one of the main ingredients in corn chowder,” Stanley Tucci tells a young new hire ladling some into a bowl.)

The Durst Organization opened the revamped cafeteria at 151 West 42nd Street in 2018, after Condé Nast moved out. Part of its $150 million renovation was spent giving the cafeteria, originally designed by the famed architect Frank Gehry, a face lift. Anyone whose company rents space in the building is welcome.

Durst put beehives on the roof of a neighboring building and uses its honey in the cafeteria. It began offering master classes in cooking lobster and fresh pasta. Food scraps are shipped to the company’s 1,800-acre McEnroe Organic Farm near Millerton, N.Y., and the compost is used to grow vegetables for the cafeteria line.

Quality food, served in refined gathering spots, has been such a winning formula that Durst is replicating it in its building at 825 Third Avenue, which is also undergoing a $150 million renovation. By this summer, employees at companies like Gotham Asset Management and National Bank of Egypt will be able enjoy a cafeteria lunch, and after work head to a 6,000-square-foot terrace for happy hour or an oyster-shucking party.

At One World Trade Center, which Durst co-owns with the Port Authority of New York and New Jersey, a large, casual communal space on one floor offers a quick-service cafe with high-end coffee and beverages. The building is home to young, midsize tech companies like Wunderkind and Undertone, which have pumped up their own pantries, sometimes making them the centerpiece of the office.

“What we’re seeing is a merger of the renaissance in food and corporate dining,” said Spencer Cohn, who manages food and beverage for Durst. “The shift is not temporary.”

David Neil, a Durst principal, said a number of companies have made their leasing decisions based on a building’s food and beverage offerings.

In less flashy corners of corporate America, companies are struggling to find efficient ways to manage unpredictable lunch crowds and reduce labor costs while still offering dining options. Streamlined menus with QR codes are posted on office walls, and orders are made on apps or at kiosks.

Some businesses have abandoned cafeterias altogether in favor of subsidizing food delivery. An app called Relish by ezCater aggregates a variety of restaurant orders from employees and delivers them all at the same time, in uniform packaging, so everyone can eat together. It uses a network of more than 104,000 restaurants in every state, selected based on their ability to reliably feed large groups.

Stefania Mallett, the chief executive of ezCater, said that companies she never thought would subsidize food for employees have signed up because it’s cheaper than running a cafeteria and satisfies younger workers, for whom food is becoming a requirement rather than a perk.

The New York ticket company SeatGeek uses the service regularly, she said. On days it offers subsidized lunch through the Relish app, five times as many employees come to the office.

“It’s much cheaper to give you a sandwich than replace a worker,” she said.

Still, there are some parts of the country where the old-school corporate dining room endures. The cafeteria at Hallmark headquarters in Kansas City, Mo., is one of them.

J.C. Hall, who founded the greeting-card company, created one of the country’s first corporate cafeterias in 1923 because there was nowhere nearby to eat besides an expensive restaurant. (He is also credited with starting the coffee break.)

In 1956, Mr. Hall opened the Crown Room, with an army of cooks, a terrific view and 36 chandeliers shaped like the company logo. “Greeting cards represent thoughtfulness, and it’s fitting that those who create them should be working in the best conditions we could provide,” he said at the time.

The Crown Room was always the heart of the company, with cakes for employee birthdays, World Series parties and gift-wrapping demonstrations. People heading home for the day could pick up a potpie or some meatloaf for the family on their way out the door.

During the height of the pandemic, when headquarters was closed, the kitchen still turned out packaged sandwiches and salads to feed people in the manufacturing plants. The dining room reopened in April. “Hallmarkers were thrilled to have the Crown Room back open,” said Paul Herdtner, a company spokesman who is particularly fond of the cafeteria’s Texas sheet cake.

It’s a piece of Hallmark corporate culture no one wants to change, but reality is reality. These days, the cafeteria line is open only three days a week.