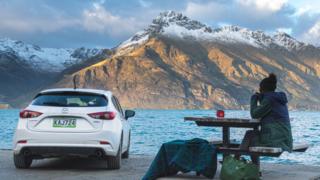 It must have looked like the heist of their dreams. A whole yard full of well-maintained rental vehicles, all lined up, unlocked and ready to go – with the keys inside.

So, under cover of New Zealand’s exceptionally strict virus lockdown, a group of thieves went to work.

They cut through the fence of local rental company Jucy in Auckland, lifted the gate from its hinges and began driving out the cars.

New Zealand was at a virtual standstill under the coronavirus lockdown making the theft easy. In fact, so easy it was a temptation too far – and the thieves came back for a second helping. And another.

A total of 97 vehicles were spirited away.

Over several days on a long weekend, they drove the cars in batches from the site and down the deserted roads of Auckland.

“It was like a kick in the guts to be honest,” Tom Ruddenklau, Jucy’s chief rental officer, told the BBC. “We couldn’t believe that when everyone was pitching in and looking after each other as a nation, there would be this brazen theft.”

‘Something was not quite right’

Jucy is a well-known sight on the roads of New Zealand. If you’ve ever been there, it will likely ring a bell. They are among the leading providers of camper vans, one of the most popular ways to explore the country.

The vans’ bright green signature colour is so easy to spot that stealing them would seem downright foolish. Hence, most of the vehicles stolen were normal city cars and only a few were camper vans.

Jucy themselves didn’t even notice the theft until they heard from the police. The cars had been parked on a storage site and over the quiet days of Anzac weekend in late April there’d been no checks by the company.

New Zealand’s roads were very empty at the time with everyone at home due to lockdown rules. But the police were still out on their usual patrol routes.

“We realised that something was not quite right,” police inspector Matt Srhoj told the BBC. “The cars caused suspicion by the way they were driven and a few of our patrol cars ended up in pursuit of those vehicles.

“When we became aware that we came across quite a few of those Jucy vehicles in unusual circumstances we assumed they’d been stolen and alerted the company.”

A wave of local support

A theft during normal times would have been bad enough, but this one felt particularly hard to take at a time when the country was pulling together to beat the coronavirus pandemic.

“It’s disappointing – this is the biggest car theft I’ve ever seen,” says Inspector Srhoj. “It is quite sad that people would do this kind of thing when we are under lockdown.”

New Zealand was then under a Level 4 lockdown, with measures going further than in most other countries.

And Jucy had in fact been trying to play their part in the effort. Some of the company’s larger camper vans – which are fitted with a toilet and shower – had been used as isolation homes for people who didn’t have a place to quarantine themselves. The company had also used some of their cars for food delivery services.

When news of the monster car heist hit the headlines, there was a wave of local support.

“The community really got behind Jucy,” says Mr Ruddenklau, Jucy’s chief rental officer. The company got free billboard space to say their cars had been stolen and people alerted the police whenever they spotted suspiciously low-priced vehicles for sale on online.

‘Police and community have been amazing’

In the end, the lockdown which made the whole theft possible in the first place also became its undoing. The police say the country’s standstill actually made it easier to track down the cars and those who stole them.

One by one, most of the cars were tracked down and returned to Jucy. So far, 85 of the missing vehicles have been recovered and 29 people have been arrested in connection with the heist.

While many of them have links with local gangs, the police say, it doesn’t seem to have been a well co-ordinated effort, let alone one where the thieves had thought their plans through to the end.

Jucy got a nasty shock but has most of its cars back in the line-up for whenever business picks up again. New Zealand has been praised for the way it’s tackled the virus and has slowly begun to lift its lockdown.

“It was devastating for us as a business,” Jucy founder Tim Alpe told the BBC. “It’s a horrible situation but if you can take a positive out of it then it’s that people rallied round to help and the police were outstanding to have arrested a lot of people and recover most of the cars.”

His colleague Tom Ruddenklau agrees: “Hats off to the police and the community, they have been just amazing.”

Inspector Shroj is confident his team will also find the cars still missing.