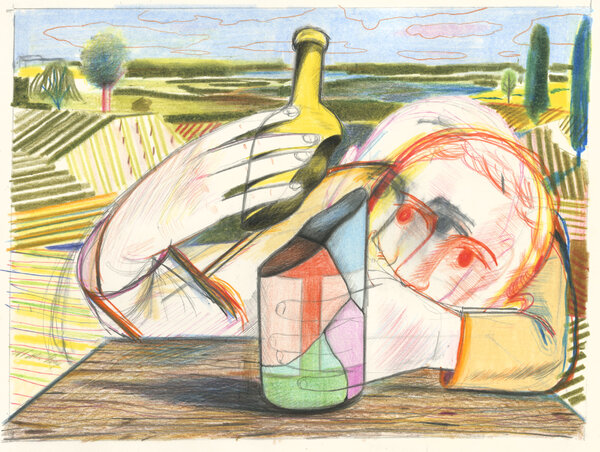 Smart wine producers have long understood the virtues of composing blends of different grapes. What one variety might lack in color, tannins, acidity or flavor, could be provided by another, or a third or fourth.

Assemble them wisely and you have a synergy, a wine that conveys a sense of completeness beyond what its parts might have suggested.

Bygone farmers, including those who planted some of the oldest vineyards in California, took it a step further: They did not merely create a blend of different grapes while making the wines, they blended vineyards, selecting the varieties they wanted in the wine and interplanting them.

The grapes were then harvested and fermented together to make a fully integrated wine. One of the oldest examples, the 12-acre Ancient Block at Bucklin Old Hill Ranch in Glen Ellen, Calif., includes 16 different varieties.

Few farmers plant mixed vineyards like this nowadays. Most prefer discrete single-varietal blocks, which can be harvested and fermented separately at a uniform degree of ripeness. I can think of a few notable exceptions, though, like Domaine Marcel Deiss in Alsace, which firmly believes that the character of its vineyards are best expressed through a field blend.

For the last month here at Wine School we’ve been drinking white blends, which has led me to think about all the ways that farmers and winemakers practice blending, using both obvious and more subtle methods.

A spring frost, which might wipe out the budding merlot, might not affect the other two grapes, which had yet to bud. Likewise, a late-season cold snap or inopportune rains might only affect the cabernet sauvignon because the other two grapes would already have been harvested. In a less-than-ideal year, a farmer would still be left with something to sell.

Monovarietal farmers do not have this advantage. Yet they, too, practice blending in unexpected ways. Very few vineyards are wholly uniform. One side might be higher in elevation than the other, and so might ripen more slowly or be less subject to frost.

In some vineyards, the soil might be stonier in one section with more clay in another, yielding grapes that could have different characteristics. When winemakers put together different parts of the same vineyard, even if only one grape is grown, it’s still a blend.

Similarly, many farmers believe that selecting only a single clone of, say, pinot noir for an entire vineyard is a formula for dull wines. Instead, they prefer a variety of clones — each a genetically identical pinot noir vine that exhibits slightly different characteristics. When put together, they hope, the various clones will create a more interesting wine. That’s a blend, too.

I chose the Tablas Creek because, as I said in a recent column about the drought in the Paso Robles area, they make terrific wines, and I respect their regenerative, biodynamic approach to farming. It is partly owned by the family that also owns Château de Beaucastel, the venerable producer of Châteauneuf-du-Pape, and is dedicated to the grapes and styles of the Southern Rhône Valley.

Most Rhône whites are blends, but I thought a Rhône-style blend from Tablas Creek would be easier to find in more areas of the United States.

That said, I should have done a better job of selection. In New York, I could only find the 2017 vintage of the Patelin de Tablas Blanc, which is intended to be a casual white for drinking young, unlike some of Tablas Creek’s more ambitious white blends.

I should have known that the ’17 might have been past its prime as I had coincidentally already tried the 2020, the current vintage, at the winery when I visited in early July. Though I could sense the body and structure of the 2017 as I drank it, it had clearly lost its youthful zip and freshness. I opened two bottles with the same results.

Rather than dwell on the ’17, I’d rather talk about the 2020, which was exactly as it was intended to be, energetic and direct, with lively acidity, fresh fruit flavors and a creamy texture, not complex but delicious and refreshing.

It was a blend of five Rhône grapes: grenache blanc (40 percent), viognier (21 percent), roussanne (19 percent), marsanne (15 percent) and clairette blanche (5 percent). This blend may change from year to year, depending on the character of the vintage. Unlike the tired ’17, which tasted mostly of the viognier’s tropical fruit, the ’20 was a seamless whole.

Like the Patelin, the Boxler is also intended for casual drinking, but the ’18 was in its prime. Edelzwicker is an Alsatian term for a blend that traditionally included only the region’s lesser white grapes. Nowadays, as it is unregulated, anything goes. As with the Tablas Creek, the blend changes depending on the vintage.

Though the grapes blended well in the ’18, I could sense the individual qualities — the flowery muscat, the mineral riesling, the textured richness of the pinot blanc and auxerrois. It was simple and easy, well balanced with maybe a touch of residual sugar that emerged as the wine warmed in the glass. I thought it was terrific, a lovely wine for an offhand lunch with friends.

It was maybe unfair to compare the first two wines to the Bouscaut. It’s a different sort of wine, serious rather than casual, and built to evolve with age. It’s a roughly equal blend of two grapes, with just a little more sauvignon blanc than sémillon.

Unlike the other two blends, which are perhaps composed of what’s left after the producers put together their more ambitious cuvées, this is Bouscaut’s top white. It’s fermented and aged in oak barrels, 40 percent new, which leaves an oaky imprint that nonetheless integrates well with the spicy, floral, beeswax qualities of the wine. As with the Tablas Creek, this was a seamless blend, although I always feel I can sense the rich, waxy texture of sémillon. It’s just beginning its evolution.

In my introductory column, I mentioned that red blends were more illustrious and mentioned far more often in general wine conversations than white blends. Readers were ready to cite numerous examples of white blends that I hadn’t considered.

Stephen Jacobs of Albury Wodonga, Australia, cited the country’s many white blends, including its superb sauvignon-sémillons, while MarkH of London reminded me of South African examples. Ken of Frankfurt pointed to Catalonian blends and Randall Grahm, the irrepressible winemaker from California, who made many noteworthy white blends in his Bonny Doon days, said Italian whites, particularly those of Friuli, did not receive enough attention.

“Every wine lover should experience Ciallabianco at least once in their life,” he said, referring to the blend of ribolla gialla, picolit and verduzzo from Ronchi di Cialla.

All the wines we tasted received a fair amount of affection. Houman Afshar of Brooklyn called the Boxler “playful and balanced,” while VSB of San Francisco called it “as harmonious as the Four Tops on a good day.” George Erdle of Charlotte, N.C., loved the Tablas Creek with a dish of king crab, garlic and lemon, while Peter of Philadelphia, judging by how much of each bottle had been consumed at a roast chicken dinner, called the Bouscaut the big winner.

While these three are obvious examples of blends, it’s worth remembering, as I said, that most wines, even varietal examples, are blends in a fashion. Blending is a way of enhancing complexity, filling in missing pieces and safeguarding a wine.

Blending also offers opportunities for many experimentally inclined winemakers, who are constantly tinkering. A riesling producer might want to know what would happen, for example, if she fermented a small portion in a concrete egg, or macerated the juice with the grape skins for a prolonged period.

The producer could then blend it back in with the conventionally made wine, confident that the small portion, no matter the result, would be subsumed by the whole. A successful experiment might become a future cuvée.

By contrast, eliminating the possibility of blending away a mistake is like a high-wire act working without a net. Christophe Roumier, a top Burgundy producer, makes a tiny amount of grand cru Musigny each year, barely enough to fill a single barrel.

He once said it was the most nerve-racking wine to make because he had no margin for error. If he made a mistake, he did not have enough wine to bury it in a blend. As his Musigny is among the most coveted wines in the world, it’s a good thing he rarely misjudges things.