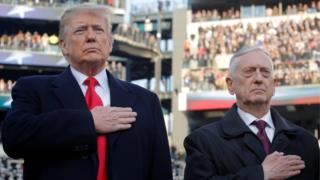 Former US Defence Secretary James Mattis has denounced President Donald Trump, accusing him of stoking division and abusing his authority.

In rare public comments, Mr Mattis said the president had sought to “divide” the American people and had failed to provide “mature leadership”.

He said he was “angry and appalled” by Mr Trump’s handling of recent unrest.

Mr Mattis resigned in 2018 after the president decided to withdraw US troops from Syria.

He has remained largely silent since then, until his stinging rebuke of the Trump administration was published in The Atlantic magazine on Wednesday.

In apparent response to the criticism, Mr Trump posted a series of tweets in which he said Mr Mattis was “the world’s most overrated general”.

“I didn’t like his “leadership” style or much else about him, and many others agree,” he said. “Glad he is gone!”

Probably the only thing Barack Obama & I have in common is that we both had the honor of firing Jim Mattis, the world’s most overrated General. I asked for his letter of resignation, & felt great about it. His nickname was “Chaos”, which I didn’t like, & changed to “Mad Dog”…

What did Mattis say?

“Donald Trump is the first president in my lifetime who does not try to unite the American people – does not even pretend to try,” Mr Mattis wrote in The Atlantic. “Instead, he tries to divide us.”

Mr Mattis also addressed the recent wave of anti-racism protests that were triggered by the death of African-American George Floyd in police custody earlier this month.

Four officers have been charged in relation to Mr Floyd’s death in Minneapolis on 25 May.

“The protests are defined by tens of thousands of people of conscience who are insisting that we live up to our values… as a nation,” Mr Mattis wrote. “We must not be distracted by a small number of lawbreakers.”

The retired general – whose resignation letter in December 2018 was full of implied criticism of the president’s foreign policy – also condemned the use of the military in response to the protests.

“Never did I dream that troops… would be ordered under any circumstance to violate the Constitutional rights of their fellow citizens,” he said.

“Militarising our response, as we witnessed in Washington DC, sets up a conflict… between the military and civilian society,” he added.

Earlier this week, peaceful protesters were dispersed with tear gas and rubber bullets from a park close to the White House.

Mr Trump then crossed the park for a photo-op at a historic church that had been damaged by fire in the unrest.

This provoked sharp criticism from top Democrats and religious leaders, who accused the president of aggressively targeting the demonstrators for the purpose of posing for photographs.

Mr Mattis also derided the “bizarre photo-op” and accused the president of an “abuse of executive authority”.

But, in an earlier tweet, Mr Trump questioned whether the protesters were peaceful and said “people liked my walk to this historic place of worship”.