Being of a practical nature, I’m loath to cook something twice if once will suffice. But there are exceptions, and the supple, silky eggplant in this elegant swordfish dish is one of them.

My plan was to cook cubes of late-season eggplant until they collapsed into a velvety heap — each piece barely maintaining its integrity — and to use that as a bed for buttery, wine-simmered swordfish.

Sautéing the eggplant in batches would have gotten me there — eventually. But unless I cranked the heat and used enough oil to actually fry the pieces, it would have taken forever, and it would have been tricky to keep the eggplant from steaming and stewing rather than browning. 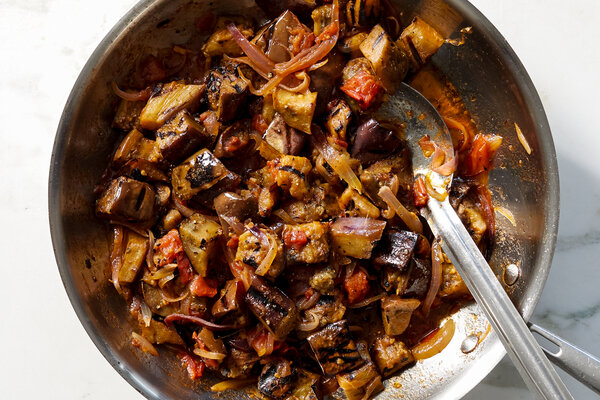 Instead, it’s much faster and easier to spread the cubes on a sheet pan and run them under the broiler — or toss them on the grill, if that’s your thing. Yes, this requires a second cooking method, and another pan if you’re broiling. But the payoff in flavor is huge. The extreme direct heat allows the eggplant to brown deeply on all sides, concentrating its juices and lending a caramelized note — in under 10 minutes.

After the broiling, once the eggplant is browned, tender and glistening, resist the urge to gobble it up directly off the baking pan. Instead, cook it again in a heady mix of diced tomatoes and onions. This both sweetens and softens it, turning each cube into a plush little pillow bursting with flavor.

For its part, the swordfish provides some necessary contrast, both in its firm, meaty texture, and tangy, saline flavor, imbued with garlic, capers and olives.

A splash of wine — preferably the same one you’re planning to drink with dinner — moistens the mixture and adds brightness. I’ve made this with both white wine and a bone-dry rosé, and, honestly, it’s hard to tell the difference once it mingles with all the aromatics in the pan. Use what you’ve got; even a light, sprightly red would do the trick. Just avoid jammy, fruit-bomb reds that could hog the stage.

If you’d rather not use swordfish, you could also make this with tuna or cod, or even boneless chunks of chicken breast. When you’ve got twice-cooked eggplant that’s this good, there’s plenty of wiggle room with the protein. Which makes this dish rather practical, after all.