GENEVA — The United Nations human rights chief urged nations to take action to root out systemic racism against people of African descent on Monday, as she released a report calling for measures to dismantle discrimination and for sweeping changes to policing, as well as reparations.

“The status quo is untenable,” Michelle Bachelet, the United Nations High Commissioner for Human Rights, said in a statement. “Systemic racism needs a systemic response. There is today a momentous opportunity to achieve a turning point for racial equality and justice.”

The 20-page report and an accompanying 95-page conference paper draw on evidence from 60 countries. Work on them started after the May 2020 death of George Floyd, a Black man killed in Minnesota by a white police officer. Its release comes days after the officer, Derek Chauvin, was sentenced to 22 and a half years in prison.

“We could not find a single example of a state that has fully reckoned with the past or comprehensively accounted for the impacts on the lives of people of African descent today,” said Mona Rishmawi, who supervised the preparation of the report.

The United Nations human rights office, which prepared the report, recommends creation of a commission or some other body with a one- or two-year mandate to scrutinize and monitor law enforcement.

It urges a reimagining of policing to address racial stereotyping, the militarization of weapons and tactics, and a lack of accountability.

The report draws on interviews with more than 340 people and more than 100 written submissions from civil society and academic organizations. It points to common patterns of experience for people of African descent in Europe, Latin America and North America contending with poverty and with barriers to education, health care, jobs and political participation.

The report spotlights the deaths of 190 people of African descent who died at the hands of law-enforcement officers, most of them in the United States, pointing out that few of the victims posed a threat. 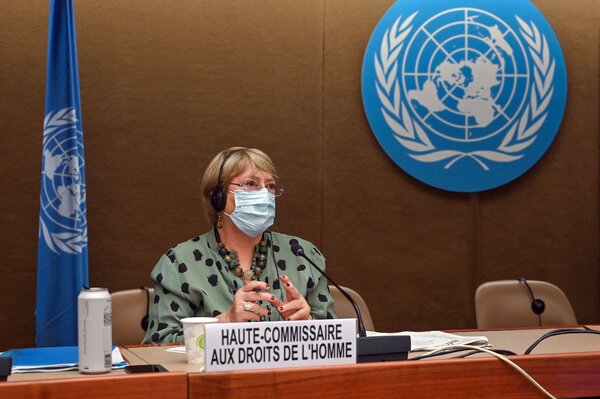 It analyzes seven emblematic cases, including those involving Mr. Floyd and Breonna Taylor in the United States, together with cases from Brazil, Britain, Colombia and France. Only the death of Mr. Floyd has resulted in police being held to account.

But the deaths recorded in the preparation of this report were just “the tip of the iceberg,” Ms. Rishmawi noted. She cited a mother in Latin America who protested “you always talk about George Floyd, every day we have a George Floyd and nobody talks about it.”

The report calls for reparations as an essential step to addressing the suffering inflicted by slavery and colonialism. Monetary compensation was important, the report said, but reparations “should not only be equated with financial compensation.” They could also include formal acknowledgment and apologies, educational reform and measures to commemorate the experience of people of African descent, it said.

Ms. Bachelet will present the report to the United Nations Human Rights Council next month at the start of a debate that will test the Biden administration’s willingness to engage on racism in a multilateral setting.

Last week, the State Department said it led an effort at the human rights council to address systemic racism in a statement that was signed by 158 countries.

“The United States will continue to engage the international community to find effective means to address systemic racism both at home and around the world,” Jalina Porter, the department’s deputy spokeswoman, said on Thursday.

Secretary of State Antony J. Blinken, in a statement marking Juneteenth, a holiday commemorating of the end of slavery in the United States, said the country was already taking steps to root out issues of racism by “holding ourselves to the highest possible standards of accountability” and dealing with them transparently.