Britain has basked in the sunshine for the past two days, but weather conditions will drastically switch from summer to winter in the space of 24 hours. On Sunday, cold weather, thundery skies and heavy rain will hit parts of the UK.

Already on Saturday, Netweather has issued a thunderstorm warning stating: “the capped anticyclonic mid/upper levels to support localised heavy showers and perhaps an isolated weak and short-lived thunderstorm to develop this afternoon.

Northerly winds will bring cold air from the Arctic overnight on Saturday and into Sunday, causing a sharp drop in temperature.

Met Office forecaster Marco Petagna said of the weather this week: “It’s from summer back to winter in 48 hours. Massive temperature changes are forecast. 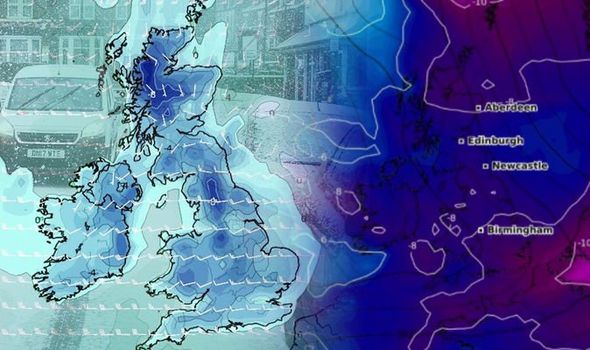 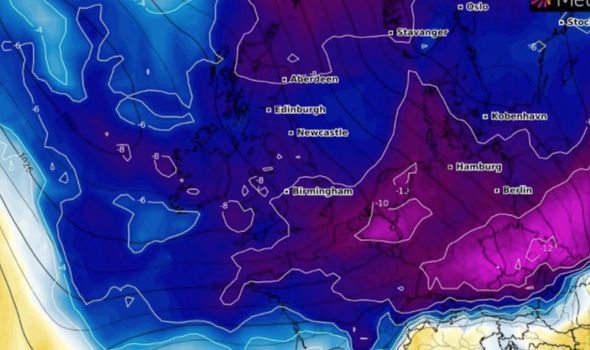 “It warms up from Wednesday with the mid-20s on Friday in the south, then cold Arctic air sweeps south across the UK during the weekend, and could see snow on Scottish mountains.”

Already some places have felt the cold, with rain over the Northern Isles and the Highlands, which will spread south across Scotland to reach the Central Lowlands.

A cold front is currently over Scotland, bringing a huge contrast in temperatures from earlier today.

The Met Office tweeted a weather chart showing the drastic change in temperature between Saturday and Sunday. 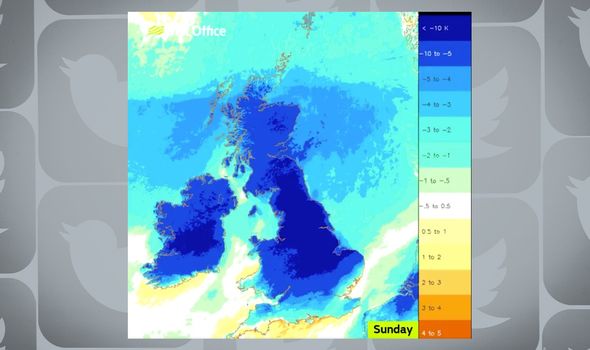 The dark blue chart shows differences of more than 10C between the two days.

On Sunday, across the north showers will turn increasingly wintry, falling with snow on hills and at lower levels over Orkney and Shetland later.

Snow risk maps from Netweather show a risk of snow over Scotland and the North of England on Sunday, with perhaps more into next week.

Weather Outlook forecaster Brain Gaze said the last time May saw such a big snow event was in 1997.

He said: “A plume of very warm air from Spain means the VE Day holiday could see 25C.

“But thunderstorms are a risk and an exceptionally cold plunge of polar air follows on Sunday. 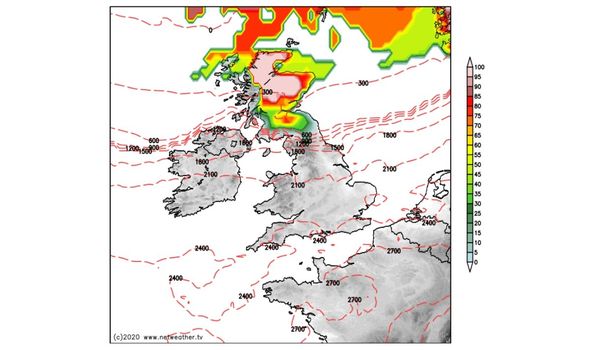 “Forecast models show snow showers in the north and even snow risks in parts of the south.

“The last time I can recall snow falling like this in May was 1997.”

Elsewhere in complete contrast, once patchy cloud and mist have cleared from Northern Ireland and the North of England conditions will become very warm again.

The best of the sunshine will be from the Midlands southward where it will be mainly dry, but a few locally sharp showers will develop later, over Northern Ireland and northern England. 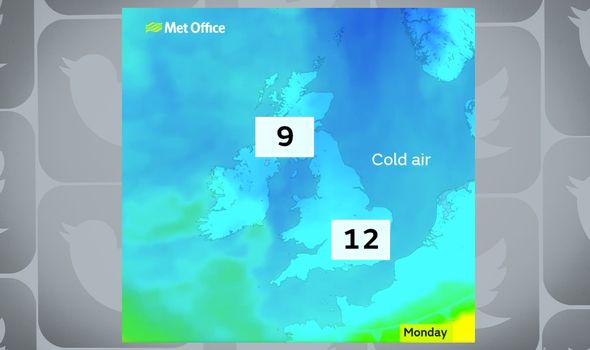 Any wind will generally be light, but with a colder north-eastery wind will spread south over Scotland through the day.

This will lead to a huge range of temperature across the country, from only 6 or 7C in the far North to 17 or 18C over southern Scotland, with the Midlands, South and South East seeing 22 to 24C again by afternoon.

England and Wales particularly the South see another warm summery evening, but with a few sharp showers breaking out and perhaps the odd thunderstorm, but you’ll be unlucky if you catch one.

Across Northern Ireland and northern England, it’ll be turning cloudy and cooler from the North overnight with some mostly light showers.

Across the South, however, it’ll stay mild and dry until morning in a mainly light breeze.

Over Scotland, a North East or northerly wind will freshen, making it feel increasingly cold.

There will continue to be scattered showers across the North and East that’ll fall as snow on hills and at lower levels in the far North.

Cold weather will continue on Monday and into next week, spreading further south with temperatures dropping to 12C.