Ferocious easterly winds are predicted to strike throughout February, bringing “disruptive snow” with them. Scotland could be hit with a staggering 145cm (4 feet) of snow on Thursday, February 11, the latest snow depth models from WCHARTS show. The charts also show south-eastern parts of England being blasted with deep levels of snow during the second week of February.

London could also get a sprinkling of 3cm on Tuesday, February 9.

North western parts of England including the Yorkshire Dales and The Lake District are expected to be hit with 8 inches (21cm) heavy snow as early as Wednesday, February 3

Temperatures could also plummet as low as -12C in central areas of Scotland on Wednesday, February 10.

Widespread cold is likely to plunge to -4C in London and the south east on the same day. 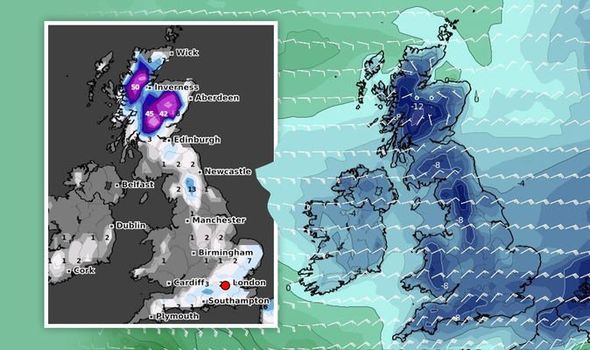 Cumbria in the north of England should be chillier at -5C, however.

Forecasters have warned the deep freeze could spark Beast from the East chaos.

Gavin Partridge, the owner of GavsWeatherVids, predicted cold air from the east to engulf the UK from this week.

He said: “Later in the week we might pull in some very cold air from the east but there remains a lot of uncertainty about whether we’ll open the door to The Beast. 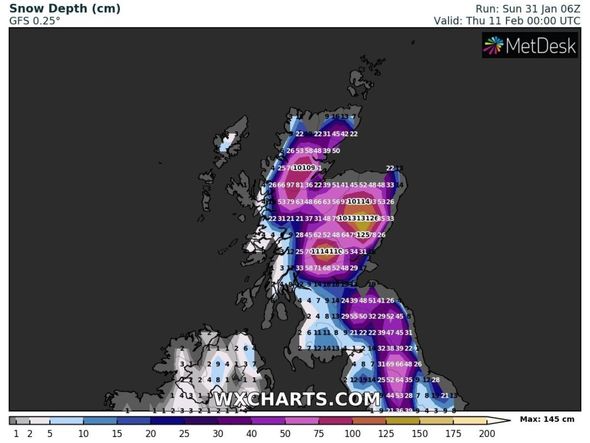 “Outbreaks of heavy rain will move northeastwards across the country on Tuesday with sleet and snow through northern England and Scotland.

“There could be significant snow over high ground. Cold in the north. Mild in the south.

“Wednesday will stay cold in the north with sleet and snow across Scotland. England, Wales and Northern Ireland will be milder with showers or longer spells of rain in the south.

“Thursday and Friday become uncertain. At the moment it looks like we could see colder air from the north moving southwards along with strengthening easterly winds. 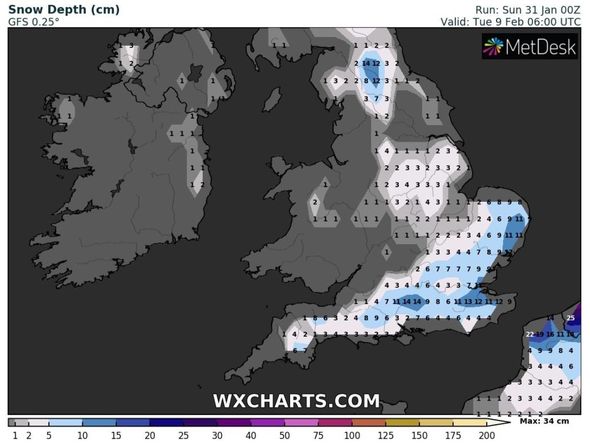 “This would bring a risk of snow showers to northern and eastern regions.

“Next weekend might turn bitterly cold with strong easterly winds driving in heavy snow showers but there’s also a chance the cold weather will stay in the north and southern regions remain relatively mild. A knife edge scenario.”

The BBC’s long range forecast for next month also predicted cold air to push into the UK, potentially bringing a freeze similar to the Beast from the East in 2018.

The forecast said: “Next week, as the colder air lingers over the country from Sunday into Monday, there will be a more widespread risk of lowland snow Monday night and into Tuesday morning. 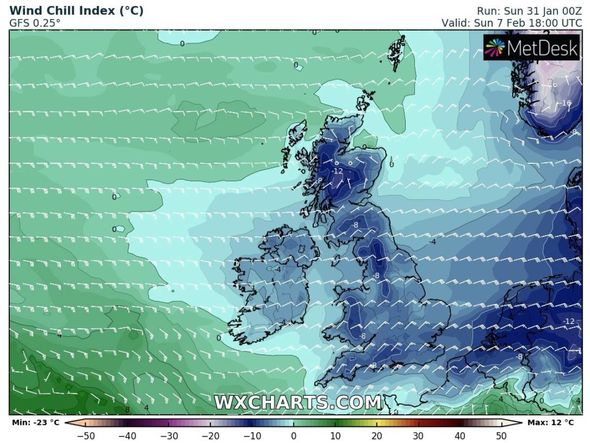 “High pressure is expected to build over Scandinavia as we head into the weekend.

“This will lead to the development of a strong easterly wind on Saturday and Sunday. This will bring a sharp cold air from Russia into the UK and may well bring some wintry showers to eastern areas.

“In mid-February, high pressure is expected to remain over Scandinavia at least for the first half of the week, keeping things rather cold.

“This setup is similar to the classic “Beast from the East” from 2018. 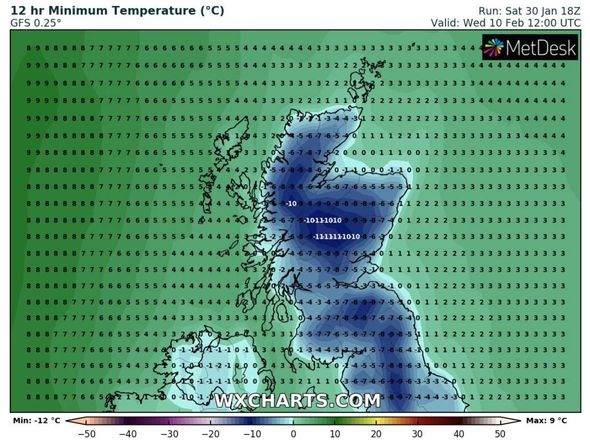 “There is potential for some heavy snow showers for eastern areas for the first few days of the week.

“However, this is very sensitive to the strength of the high to the northeast, and a minor shift will see the easterly winds fail to transport the coldest air from Russia all the way to us in the UK.”

The forecast said: “Confidence is low for mid-February onwards however similar conditions look most likely with high pressure remaining to the north of the UK bringing overall colder than average conditions and below average precipitation amounts. 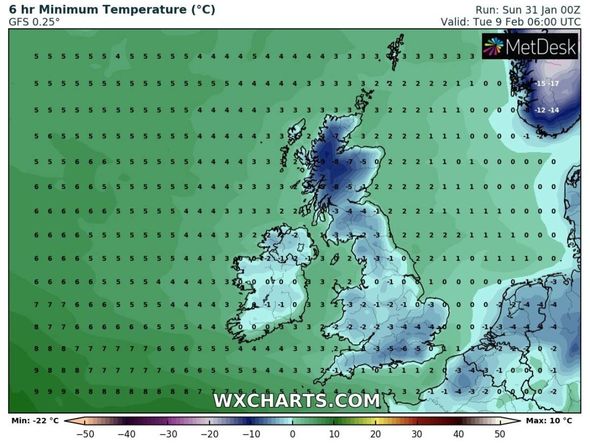 “Through this period the risk of wintry hazards continues to be greater than normal with snowfall most likely in eastern areas.

“There remains the possibility of less cold interludes occurring from the west and southwest bringing wetter and milder conditions.

“In such instances, at the boundary between cold and mild air masses there remains the risk of disruptive snowfall.”