Snow blanketed much of the country earlier this month, with wintry conditions hitting most corners of the UK. The freezing temperatures and snowfall look set to return from March 2, with the wintry blitz set to stay put for at least three days, according to new weather maps.

WXCharts’ snow probability chart shows the weather begins to turn from the last weekend in February.

The chart, valid from Saturday, February 27 at 6pm, shows the whole of the UK turn white, indicating a change in the forecast.

The chart shows a low risk of snow, up to 15 percent, across the country as the Arctic weather front approaches the UK.

A second chart shows the mercury is expected to drop from this date, with -1C forecast in Scotland and highs of 5C forecast in the capital. 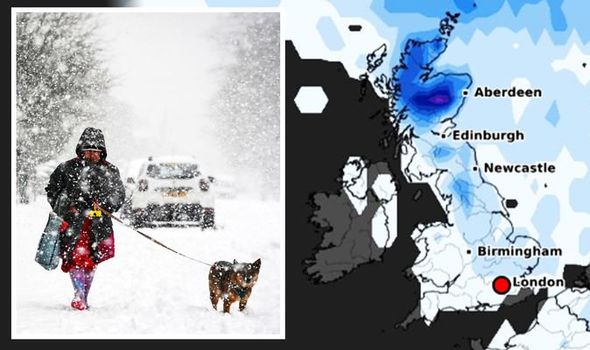 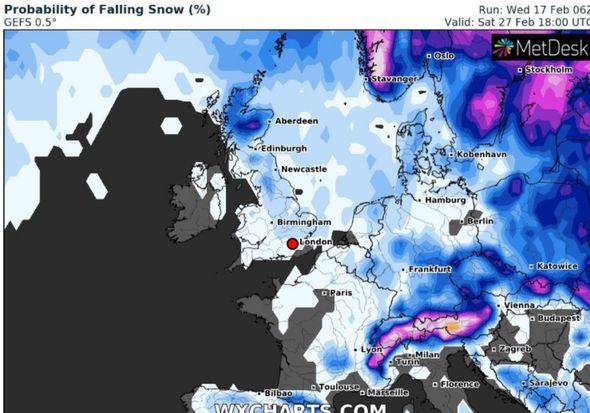 But the real risk of snow starts from Tuesday, March 2, with the forecasters’ snow probability map turning blue and purple by 6pm.

The purple colouring, observed in the Scottish highlands, represents up to a 65 percent snow risk, while the north east of England is covered by up to a 45 percent chance of snow.

By 6pm the following day almost the whole of the UK has turned dark blue, indicated the high snow risk.

As daylight breaks on Thursday, the snow risk increases for the east of England.

JUST IN: Magnetic field cracks leading to stunning auroras in the Arctic 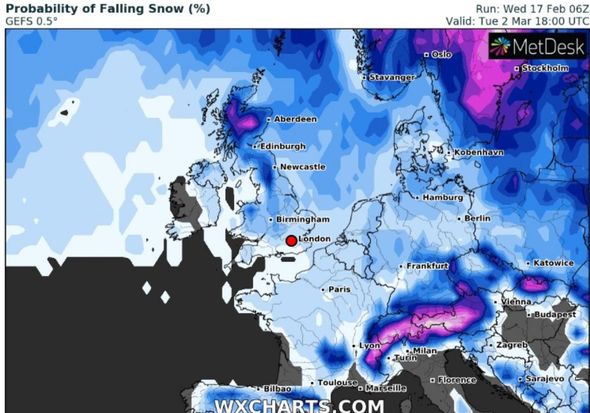 The maps show the snow risk begins to ease by Friday afternoon, with up to a 20 percent probability of snowfall across much of the country.

The snowfall is set to coincide with a fresh cold spell, that is set to start from the end of the month.

At 6am on Saturday February 27 temperatures will dip to -2C in Scotland, while the rest of the country will see the mercury battle to rise above 3C, according to charts by Netweather.

Temperatures look set to warm slightly through Sunday and Monday, before plunging again on Tuesday morning. 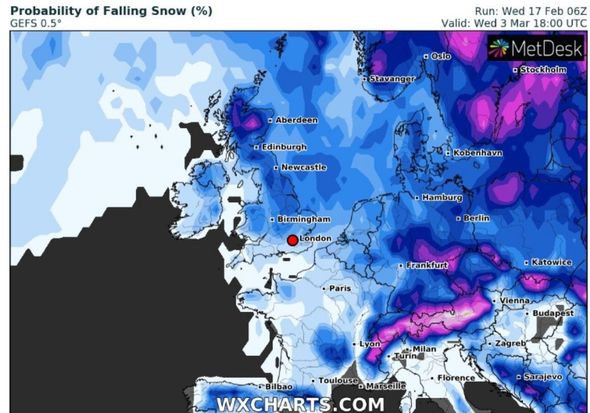 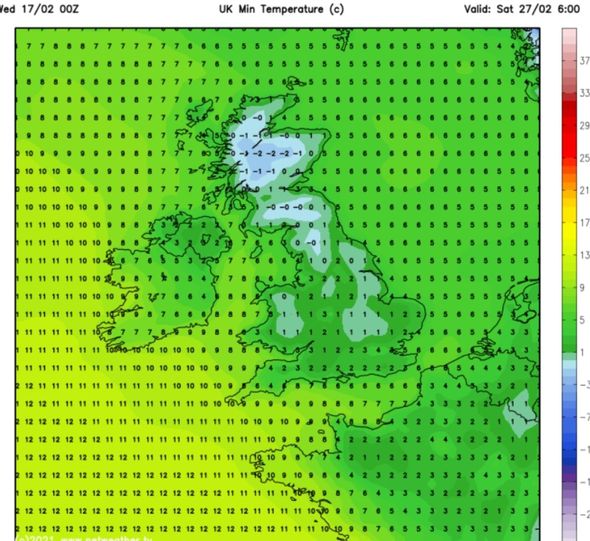 The mercury looks set to dip to -2C in Scotland by 6am on March 2, with temperatures averaging at 2C for the rest of the country.

The chilly snap is expected to last for the next few days, according to the weather charts.

Brian Gaze at The Weather Outlook forecasts the last weekend of February to be particularly chilly, with spells of rain and snow likely.

He said: “Cold or very cold incursions remain an ongoing possibility, however, rather mild and wet spells are likely, particularly in the south. 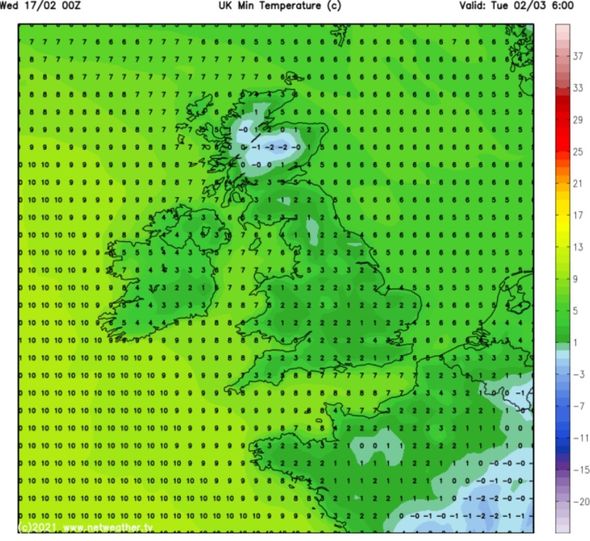 “Snow is most likely over high ground in the north, but with cold air expected to stay close to the UK there is a chance of the risk spreading southwards at times.”

The Met Office warns “wintry hazards” could strike at the start of March, as temperatures fall.

The said: “In early March there is a continued signal for higher than average pressure to sit close to or over the UK, with dry and settled conditions most likely.

“Temperatures are predicted to be a little below average at the start of the period, slightly increasing the chances of cold spells occurring.

“During this time there looks to be an increased likelihood of overnight frosts and a risk of wintry hazards, such as snow and ice, although unlikely to be as disruptive as earlier in the year.”