Low pressure from the Arctic is predicted to swoop in causing icy conditions across northern regions of England and Scotland over the next week. Snow has already started to settle in Central Scotland and is likely to linger until Christmas, with as much as five inches laying today, according to WXCHARTS’ snow depth models. The snow depth models show snow in central Scotland on every single one of the 15 days from today, December 11, up until Christmas. The most amount of snowfall is predicted on December 25, by the charts, which shows 14cm in the region, while the west of Scotland could see 4cm. This means on Christmas morning, people in the northwest of the UK may wake up to an extra present with a sprinkle of snow on the ground.

Temperatures are also forecast to plunge as low as -7C on Christmas Day in central Scotland, with other regions including Fort William hit by -3C and Aberdeen seeing lows of -2C, WxCharts predicts.

The cold front will arrive early next week as -2C is forecast to hit on Thursday in Scotland.

Most of England could see single figures over the next couple of weeks as Manchester and Birmingham are hit with 5C next Thursday.

Newcastle is forecast to see freezing 0C temperatures on Christmas Day, with southern regions including London being hit with 3C. 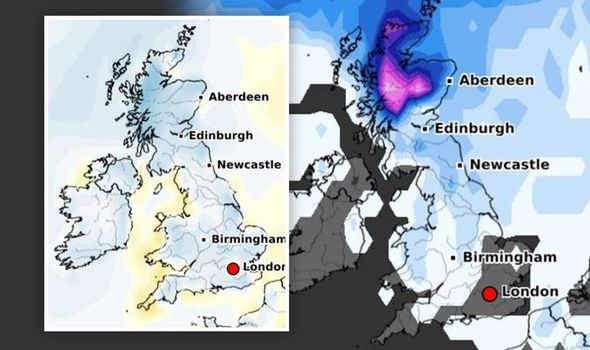 She told Express.co.uk: “Overall we expect temperatures to remain above average next week and into the week commencing December 21, around 2 to 5 degrees above normal for the time of year.

“This is due to a mild west to south-westerly airflow across the British Isles, with any wintry precipitation restricted to the higher elevations of the Scottish Highlands.

“Confidence drops significantly towards Christmas with a range of different model solutions. 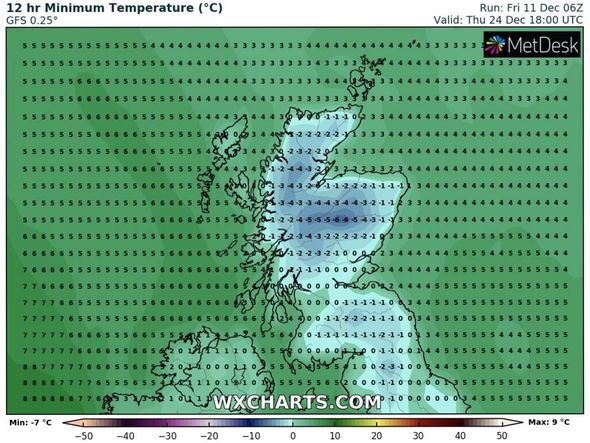 “At present, temperatures are forecast to drop to near average for the time of year through the end of December, with conditions expected to be changeable.

“Unsettled conditions at times to the north and west, with some drier and brighter interludes.

“Some wintry precipitation at higher elevations, with a risk to lower levels at times.

“However, confidence is very low with a range of model solutions.” 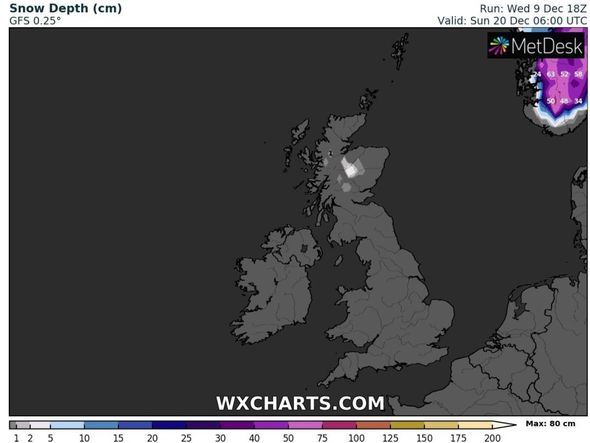 The forecast said: “Outbreaks of rain or showers are still expected at times, mainly in southern and western parts, which may become wintry on high ground, and perhaps at lower levels at times.

“Temperatures are likely to be around average for this time of year, however, there remains chance of turning colder again later in the period.”

The BBC Weather forecast for the end of December added cold air from Scandinavia and Russia arrive then. 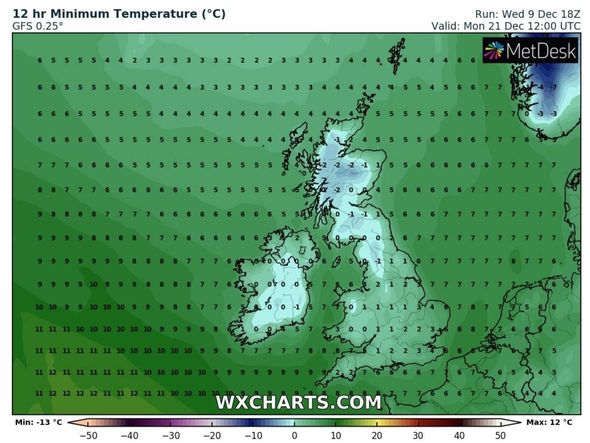 It said: “A weather ‘battleground’ will develop across the north Atlantic and Europe during the Christmas week and the UK will be in the middle of it.

“Our last update suggested that a persistent and vigorous low pressure track across the north Atlantic would be the main driver of the UK’s weather, delivering us all some mild, wet and windy weather through the Christmas period.

“This is still likely for some of the time, but there will probably be an interruption. 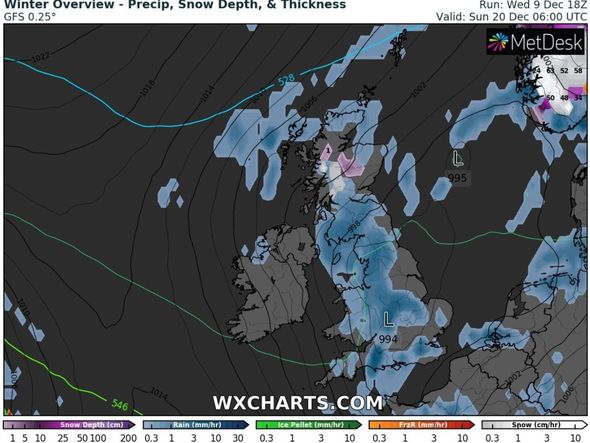 “We can’t ignore the prospect that the massive high-pressure area over Scandinavia extends a bit further west for a time during the last 10 days of December.

“This would deflect low-pressure areas near the UK further south, down over France and Spain.

“Cold air over Scandinavia and northern Russia would then find it much easier to flow towards the UK for a few days.”