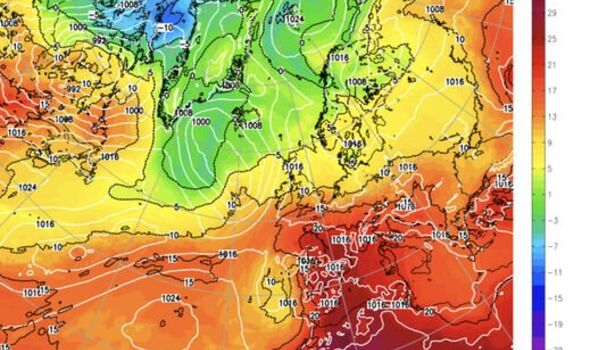 A ‘desert plume’ from North Africa will sweep up through southern UK as the nation braces for one of the hottest summer blasts in almost 130 years.

Wind and rain across Scotland, however, will bring a drop of around 20C plunging the region into a week of ‘gloom’.

The ‘Ola de Calor’ Spanish heatwave will creep into Britain from today before dying down after a mid-week peak.

Jim Dale, meteorologist for British Weather Services, said: “Temperatures will gradually rise through the week and in parts of the country we could see 30C to 35C after mid-week, although this is likely to be across the south and the southeast.”

“These sorts of temperatures will definitely knock on the door of seasonal records, whether they fall this week is something to keep our eyes on.”

“This is the first major heatwave of the season.”

Heat will surge up through the Continent–currently melting an unprecedented temperatures–from Africa, particularly Tunisia and Algeria.

Volatile atmospheric conditions will eventually go bang triggering thunderstorms ahead of the weekend.

Mr Dale said: “This blast of desert heat is coming out of Africa.”

“When it eventually breaks down, there will be the risk of some thunderstorms.

Rain will spread to the northwest driven by strong winds with the risk of widespread showers on Tuesday.

By Wednesday, the wettest weather will be confined to northern parts of the country, according to the Met Office.

Meteorologist Aidan McGivern said: “Monday will see mostly dry weather across the UK with a few showers, but it is looking like a fine start to next week.”

“All areas are likely to see rainfall on Tuesday and it is going to feel disappointing cool.”

High pressure will build across the south on Wednesday leaving low pressure to continue its northern drenching.

Unsettled weather in the north will be driven by the jet stream as it swoops across the region.

Sun-lovers should make the most of the warm weather to the south with forecasters predicting the heat will not hold out for long.

John Hammond, meteorologist for Weathertrending, said: “There’s an emerging signal that, for a time, a ridge of high pressure will edge across southern and central areas, allowing a longer drier, warmer spell later in the week.”

“However, it looks unlikely that this will build into a more prolonged hot and sunny spell.”

“Further north, closer to the jet stream and Atlantic weather fronts, cloud and occasional rain look like being more prevalent, with western coasts and hills most exposed to these.”