Strong winds and heavy rain are forecast today, with forecasters warning of conditions turning increasingly unsettled as we head towards Christmas. Britons are told to expect windy conditions, with plenty of rain as “a succession of low-pressure systems roll in off the Atlantic”. Met Office forecasters have said today will be “bright, fine and chilly in the east, but turning cloudy, wet and windy in the west”.

The changeable weather is down to deep areas of low pressure sweeping the country.

Temperatures may feel milder today, a welcome change from the freezing lows of the past two weeks.

However, weather maps do show the likelihood of some snow across the UK this weekend, mainly across hills.

Express.co.uk brings you the latest weather updates – please refresh this page for the latest. 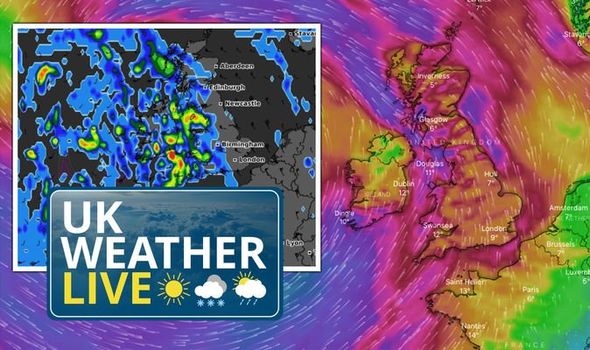 Netweather forecasters say temperatures today will reach 8C to 9C across Scotland and eastern England, with 10C to 13C elsewhere.

On Saturday the high was 10.7C in Swanage, while Katesbridge saw the coldest temperatures of the day at -0.9C.

8.02am update: Up to 50mph winds forecast to hit Britain

As the area of low pressure reaches the UK, gusts of up to 50ph are likely according to forecasters.

Gales will be felt around southern and western coasts, with gusts of 40 to 50mph and gusts inland reaching 30 to 40mph

7.38am update: Deep area of low pressure sweeping in

Netweather forecasters have said today’s weather is driven by “a fairly deep area of low pressure moving into the west over the Atlantic”.

This area of low pressure will bring heavy rain and fierce winds.

However, on the Scottish hills, the rain may fall as snow as it hits an area of colder air.