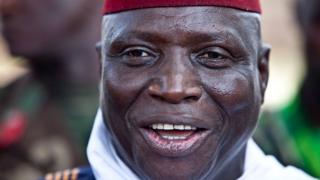 A Gambian man living in the United States has been charged with torturing political prisoners in his home country following a failed coup in 2006.

Michael Sang Correa, 41, was a member of a feared paramilitary unit known as the “Junglers”.

It has been described as a “hit squad” for then President Yahya Jammeh.

Mr Correa is said to have entered the US in 2016 as bodyguard for Gambia’s vice-president on a trip to the UN but did not return home.

Soon after, President Jammeh lost the presidential election. He initially tried to extend his 22-year rule but was forced out when West African countries sent troops to the tiny nation.

How was Correa found?

Mr Correa was working as a labourer in the city of Denver before he was arrested and detained by immigration officials a year ago, according to Colorado’s top prosecutor Jason Dunn.

Mr Correa has briefly appeared in court in the US on one count of conspiracy to commit torture and six counts of inflicting torture.

“As federal prosecutors, our mission is to seek out injustice and to hold accountable those who perpetuate it, regardless of where it occurs,” said Mr Dunn.

He said the Gambian national was charged under a federal law that has only been use twice before, allowing foreigners suspected of committing torture in other countries to be prosecuted in the US.

“We are not only holding accountable a man who has allegedly committed horrific acts of torture against his own people, but demonstrating to the people of The Gambia, and indeed the entire world, that the United States stands for the rule of law and against those who abuse human rights,” he told reporters.

In The Gambia, a Truth, Reconciliation and Reparations Commission (TRRC) has been investigating human rights violations committed during Mr Jammeh’s rule, including extrajudicial killings, torture and arbitrary detention.