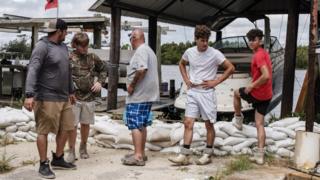 Two tropical storms are bearing down on the US Gulf Coast, with one weakening but the other expected to strengthen into a hurricane.

Tropical storm Marco is forecast to bring dangerous winds and rain to the US state of Louisiana on Monday night.

On Marco’s tail is tropical storm Laura, which was predicted to become a hurricane by Tuesday night.

Both storms have already wreaked havoc in the Caribbean, destroying homes and killing at least 12 people.

Storms Marco and Laura were both forecast to strike the southern state and churn along the coast as hurricanes within a 48-hour period this week.

Had that happened, it would have been the first time in recorded history that the state had been hit by two back-to-back hurricanes.

Now only Laura is expected to make landfall as a hurricane, after meteorologists downgraded Marco to a tropical storm on Sunday night.

The US National Hurricane Center’s (NHC) changed forecast has bought more time for residents along Louisiana’s coast to prepare for the one-two punch.

But Marco could still cause damage and disruption, worsened by Laura’s probable landfall on Wednesday, forecasters say.

What is the forecast for the US?

“Gusty winds, heavy rainfall, and lingering coastal flooding are expected from Marco along portions of the Gulf Coast through this [Monday] evening,” the NHC said in its latest advisory. 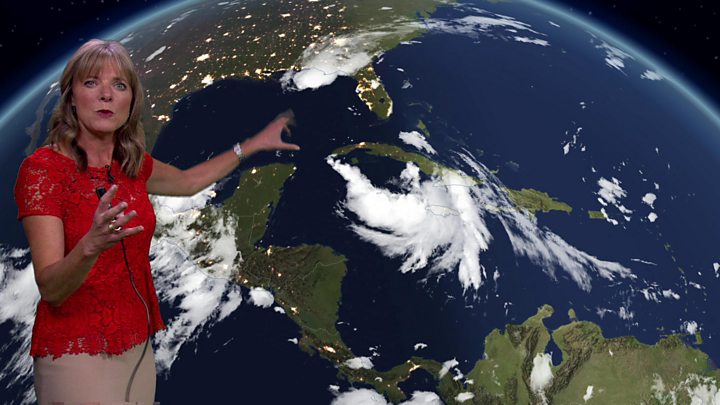 The forecast said swells from Marco may cause life-threatening surf and rip current conditions along the Gulf Coast within the next 48 hours.

Tornadoes, it said, are possible in Florida and southern parts of Georgia, Alabama, and Mississippi.

Laura is expected to be much more powerful than Marco with current forecasts suggesting it will make landfall in south-west Louisiana as a Category 2 hurricane.

The NHC said Laura was 280km (175 miles) east of western Cuba, with maximum sustained winds of 60mph (95km/h), in its latest advisory.

Parts of Louisiana and Mississippi could see impacts from both Marco and Laura.

What happened in the Caribbean?

Marco and Laura brought high winds and rough seas to the Caribbean, leaving at least nine people dead in Haiti and another three in the Dominican Republic.

Heavy rains have also battered Cuba and the US territory of Puerto Rico. President Trump declared a state of disaster in the territory on Saturday.

Among those killed was a 10-year-old girl who was hit by a falling branch in Anse-à-Pitres, on Haiti’s southern coast near the border with the Dominican Republic.

In total, 200 homes were damaged in the Dominican Republic and 1,000 people had to be evacuated.

In Cuba, many residents in the country’s eastern regions have been evacuated and housed in shelters or safer buildings on higher ground.

Meanwhile in Jamaica, there were reports of landslides and flooded roads.