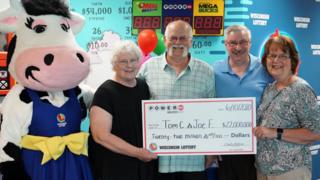 Long-time friends Joe Feeney and Tom Cook made a pact in 1992 – sealed with a handshake – that if one of them won the US Powerball lottery they would share it.

Nearly 30 years later the numbers came up for Tom – and he honoured the deal.

Joe said he was stunned when his friend called to say they were sharing the $22m (£17m) jackpot.

“He called me and I said, ‘are you jerking my bobber?'” said the keen fisherman.

The two men live in the Menomonie area of the US state of Wisconsin.

“Congratulations to Tom, Joe, and their families,” Wisconsin Lottery director Cindy Polzin said in a statement. “The power of friendship and a handshake has paid off. I’m thrilled for them. Their lucky day has arrived.”

The odds of winning the Powerball jackpot are estimated to be one in about 292 million.

The two men decided to take a cash option of about $16.7m which means that – after federal and state taxes – each will take home about $5.7m.

Tom decided to retire after learning about the win while Joe was already retired. They say they are looking forward to spending more time with family.

“We can pursue what we feel comfortable with. I can’t think of a better way to retire,” said Tom.

Tom bought the winning $2 Powerball ticket at a shop in Menomonie for the draw on 10 June.

In March 2019 another Wisconsin man was named as the winner of a $768m Powerball jackpot.